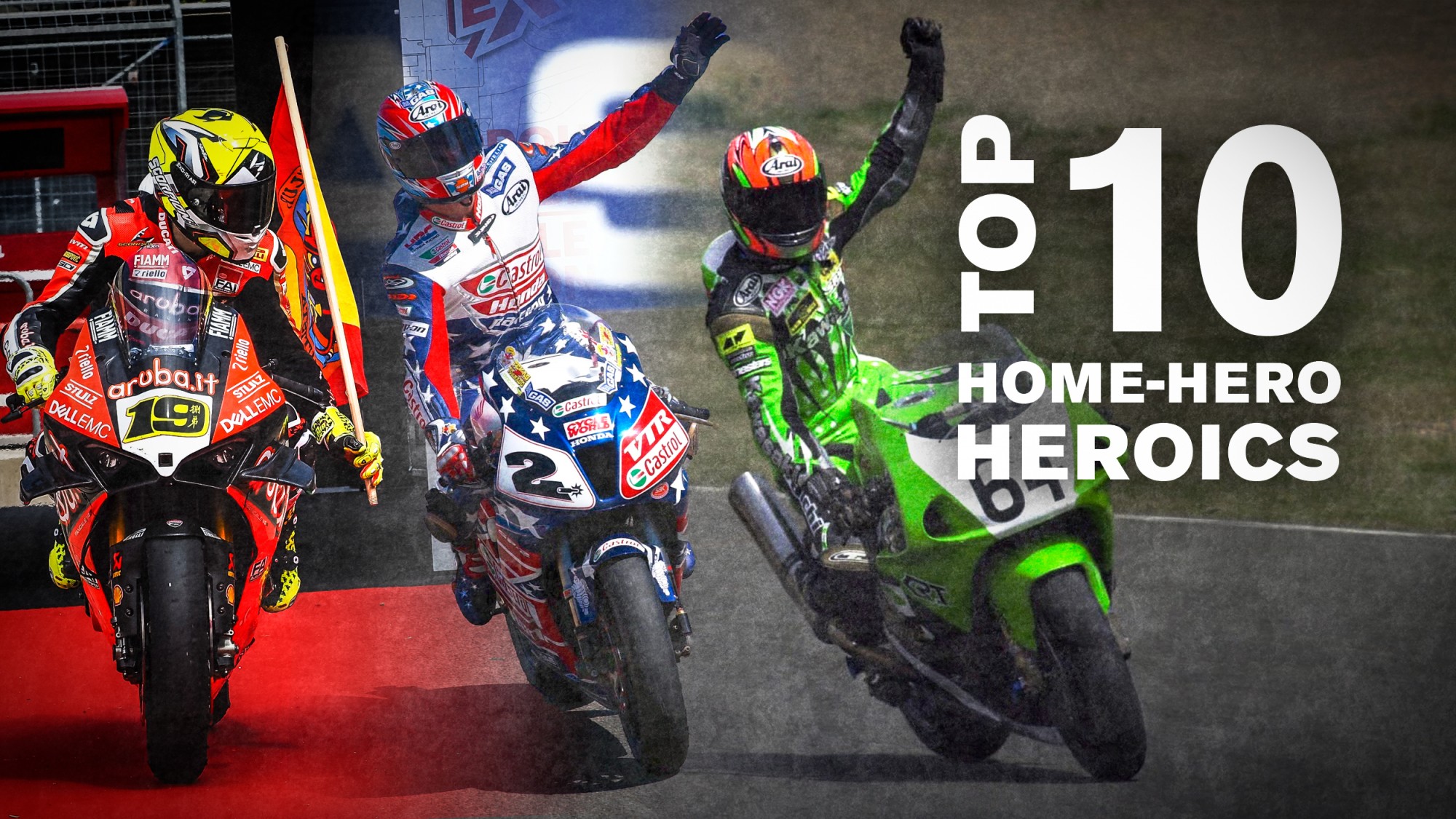 As the 2020 MOTUL FIM Superbike World Championship continues to wait for the green light to go racing again, it gives more time to reflect on some of the greatest races. This week’s theme is home victories and there’s plenty to enjoy in Part 1 below!

The end of 2014 was nearing but inter-team rivalries and team orders were just starting, as Sylvain Guintoli and Tom Sykes went head-to-head. At Aprilia in Race 1 at Magny-Cours, Marco Melandri started defying team orders and took the lead with five laps to go from teammate Guintoli. With two to go, Melandri got the pit signal to drop a place and did so, allowing Guintoli to lead and go on to win. Not the most glamourous of wins, but a wet-weather masterclass at home, nonetheless.

The Californian dream came true with Ben Bostrom, as he stormed to a third consecutive victory in 2001, completing the double at Laguna Seca. From Redding, just five hours north of Laguna Seca, Bostrom continued his phenomenal and unexpected winning streak in front of the biggest American crowd ever seen for a WorldSBK meeting, with his first career double achieved in Race 2, entering into the Championship race with just 79 points between him and Bayliss with eight races to go.

The start of one of the greatest comebacks in WorldSBK history would begin in Race 2 at Laguna Seca, as Colin Edwards began to overturn his 58-point deficit. Winning in fine style at home and with a resplendent stars and stripes livery, the Texas Tornado would go on to win the remaining eight races of 2002. Edwards took the crown from Troy Bayliss in a titanic season finale in Race 2 at Imola. Starting back in Laguna Seca and Race 2, the race proved more iconic than some thought at the time.

It’d been a long time since a Spanish rider had won at home in WorldSBK – more than 12 years! However, Alvaro Bautista’s demolition job continued from Australia and Thailand and into MotorLand Aragon, where he cruised home with more than a 15-second margin behind. It was the first Spanish win on home soil since Ruben Xaus in Valencia back in 2007 and just the second time in WorldSBK history that a Spaniard had actually won at home. Bautista had made yet more history…

The iconic Japanese venue always welcomed WorldSBK wildcards to the Championship, most of which would run riot over the regular runners. However, in 2000, it would be a relatively unknown quantity of Hitoyasu Izutsu who conquered at home. But Race 2 would be the most memorable as, despite 0.223 covering the rostrum, the 29-year-old from Osaka was able to become the first Japanese rider to achieve a double wildcard victory, ahead of Wataru Yoshikawa and Colin Edwards.

Come back for more on Wednesday 13th May when Part 2 will be released; who will take number 1?

Enjoy 2020 action once racing picks up where it left off with the MUST-HAVE WorldSBK VideoPass!