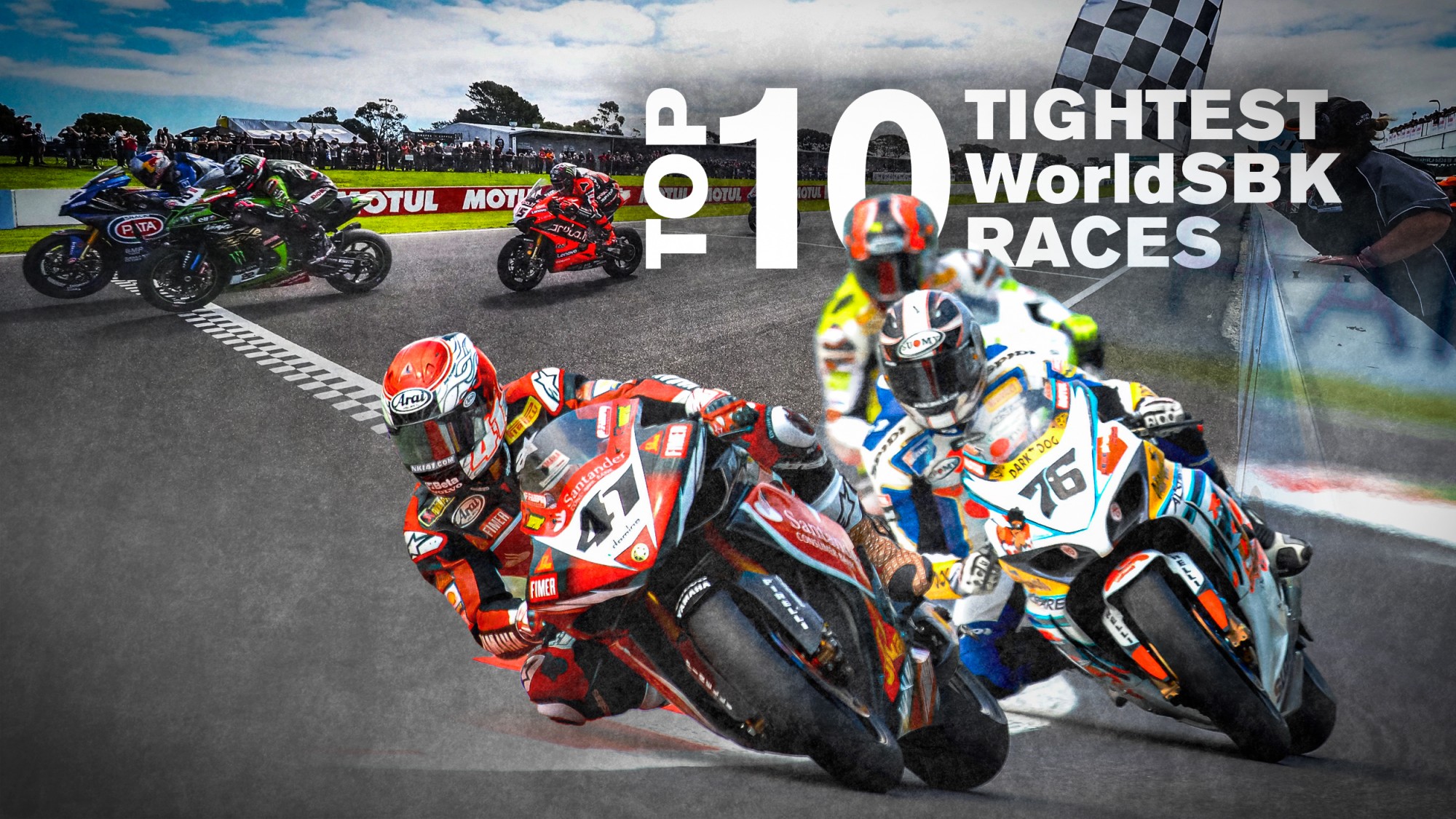 Getting closer: both on track and in time, here’s a tantalising taster of what’s on the horizon…

When it comes to the MOTUL FIM Superbike World Championship, there’s nothing quite like those ‘too close to call’ race finishes; the ones that get you on the edge of your seat. Well, brace yourself because whilst 2020 has brought many obstacles, it’s about to bring more stunning WorldSBK action. The closest finishes of all time may well have a new order once the season is back underway.

The last race in New Zealand showcased what was the then-closest finish in WorldSBK history. Giancarlo Falappa going head-to-head with Doug Polen left the two split by a mere 0.010s in the end. After a Race 1 disappointment for Falappa when he retired from the leading group, Doug Polen took a second title but the two Ducatis enjoyed a race-long battle in Race 2, with Falappa marginally on top. Further back, the home crowd were cheering as home hero Aaron Slight came home third.

It’s not often three riders go into the last corner in one order and come out in a different order, but if one circuit can offer that then Monza can. A blistering last lap at Monza in Race 2 succeeded a historic Race 1, which gave Max Neukirchner’s first win. This time, Ryuichi Kiyonari was gunning for glory, but wasn’t able to hold on as he and ‘Nitro’ Noriyuki Haga powered to the line, only for Haga to win and Neukirchner to pinch second. 0.009s covered the top two, an unbelievable finish in Italy.

Two greats, two Champions but in this duel, only one race winner. James Toseland was eager for his first WorldSBK double and to give his Dutch Ten Kate Honda team home glory and it looked all done and dusted after a spectacular final lap pass on Xerox Ducati’s Troy Bayliss. However, braking hard into the last chicane, losing his run to the line and celebrating a fraction too early allowed Bayliss to blast past on his Ducati to take the narrowest of wins. To this day, that one still hurts JT.

Just as close but a modern classic goes one place higher by virtue of it being the most recent and as well as the top three being the second-closest podium ever. Toprak Razgatlioglu was determined to give Yamaha a first victory of 2020 and led into the final corner. Despite a late lunge for second by Alex Lowes’ Kawasaki and the power of Scott Redding’s booming Panigale V4 R, Toprak held onto the lead to become the first Turkish Championship leader and 17th different Yamaha winner.

Another race decided by 0.007s, Portimao’s opener from 2013 was a thrilling encounter between BMW’s Marco Melandri, Aprilia’s Sylvain Guintoli and Kawasaki’s Tom Sykes. After Sykes forced Melandri wide at Turn 1 on Lap 17, Melandri had work to do with six laps to go. Sykes made an error and dropped from the battle on Lap 18. Onto the final lap, Melandri led his title rival to take victory, despite a last run to the line challenge from Guintoli. Hectic and hair-raising; a Portimao’s classic.

Check back tomorrow, 16th July, for Part 2 and get the 2020 season in style with the WorldSBK VideoPass!