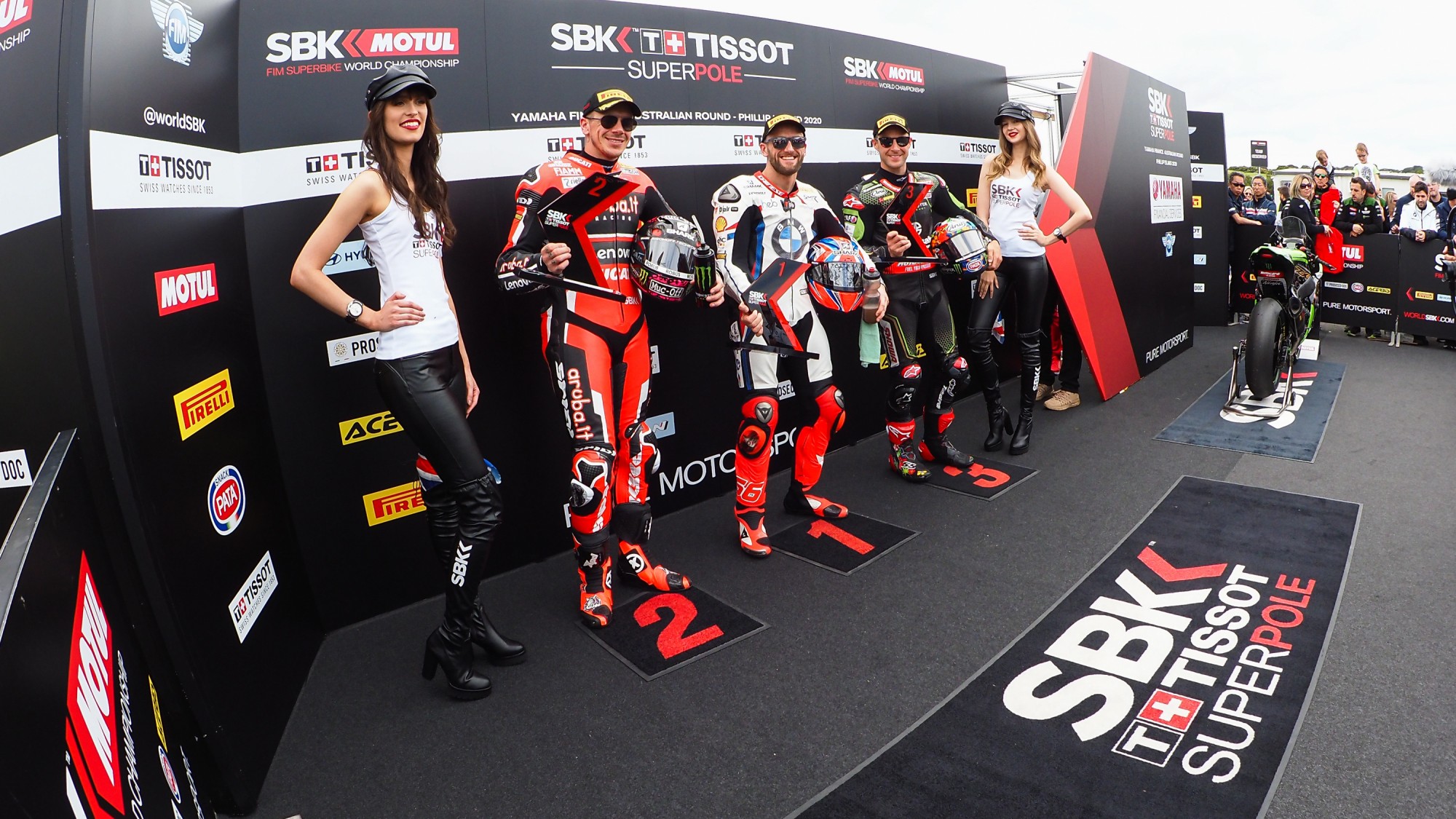 As the 2020 MOTUL FIM Superbike World Championship got underway with the Yamaha Finance Australian Round at Phillip Island, it was Tom Sykes (BMW Motorrad WorldSBK Team) who claimed the first pole position of the season in the Tissot Superpole session with a new outright lap record. Sykes’ pole position means he becomes the first rider to get 50 pole positions in WorldSBK history as well as shattering the lap record.

It was Alex Lowes (Kawasaki Racing Team WorldSBK) who set the early pace in the 25-minute session which was disrupted by a Red Flag just ten minutes in. Bodywork fell off Xavi Fores’ bike (Kawasaki Puccetti Racing) down the start and finish straight in spectacular fashion. He would eventually qualify in tenth as he was able to re-join the session after pitting for repairs.

Lowes, Redding and van der Mark were usurped by defending Champion Jonathan Rea (Kawasaki Racing Team WorldSBK) just before the Red Flag was shown as he went almost two tenths quicker than teammate Lowes. Rookie Redding would eventually qualify in second place after completing 15 laps in the 25-minute session. The British rider had topped all three practice sessions leading up to Superpole but was unable to convert this pace into pole position on his WorldSBK debut. Five-time Champion Rea finished in third place with his Kawasaki teammate Lowes in eighth while van der Mark ended the session in sixth.

Toprak Razgatlioglu (Pata Yamaha WorldSBK Official Team) qualified in fourth place ahead of Leon Haslam (Team HRC) in fifth. Haslam’s Honda teammate, Alvaro Bautista, finished the session in 15th place after he suffered from a crash at Turn 9. Bautista was taken to the medical centre for a check up but was declared fit.

French rider Loris Baz (Ten Kate Racing Yamaha) was the highest-placed independent rider in the session after qualifying in seventh place. Just behind Lowes in eighth place was Sandro Cortese (OUTDO Kawasaki TPR) who impressed despite little preseason testing. Fores in 10th place was the last rider within a second of polesitter Sykes while Chilean rider Maximilian Scheib (ORELAC Racing VerdNatura) surprised many by qualifying in 11th place.

Federico Caricasulo (GRT Yamaha WorldSBK Junior Team) qualified in 12th place, ahead of Laverty, while Michael Ruben Rinaldi (Team GOELEVEN) was 14th. After his crash, Bautista will line-up in 15th place for Race 1 ahead of Chaz Davies (ARUBA.IT Racing – Ducati) in 16th. American rider Garrett Gerloff (GRT Yamaha WorldSBK Junior Team) qualified in 17th with Takumi Takahashi (MIE Racing Althea Honda Team) finishing in 18th. Leon Camier (Barni Racing Team) did not compete in the session after he was declared unfit, after he damaged his left shoulder in a testing crash at MotorLand Aragon.

You can follow the action from the 2020 WorldSBK season with VideoPass!