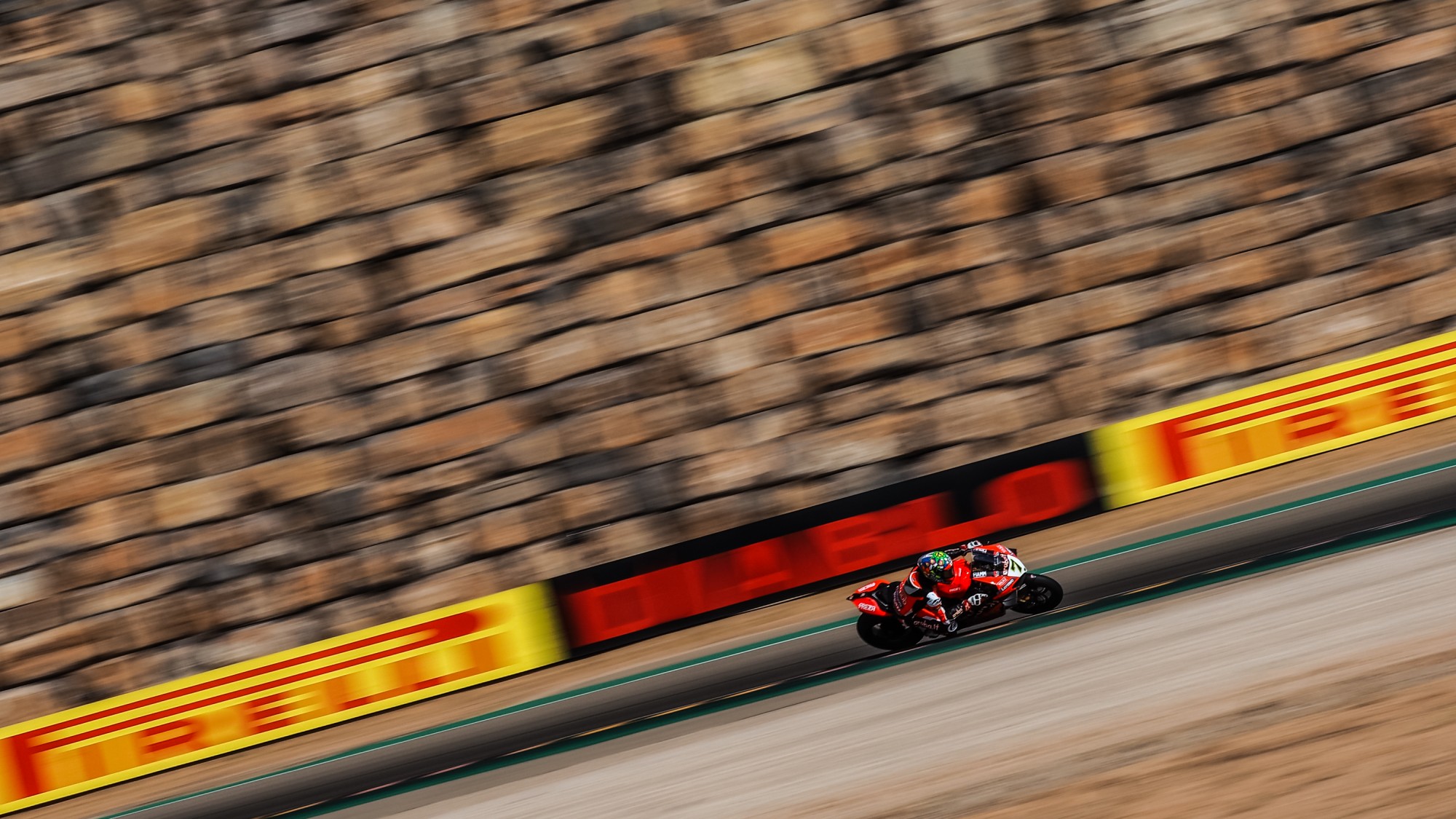 All five full-time manufacturers in the top six with nine riders within a second as WorldSBK action hots up at Aragon!

Friday running for the MOTUL FIM Superbike World Championship continued with more ups, downs and surprises. Chaz Davies (ARUBA.IT Racing – Ducati) set a time of 1’50.543 in Free Practice 1 as he looked to make it eight or more wins at MotorLand Aragon, but the challengers are close behind as Friday showed a close and competitive field.

Davies’ time was set in the morning session and it was enough to top the timings for Friday running despite finishing sixth in Free Practice 2. Davies’ Ducati teammate, Scott Redding, improved in Free Practice 2 to finish third in the afternoon but he was outside the top six in the overall classification, finishing in eighth place overall.

@jonathanrea improves his personal best and sets the fastest time of FP2 with 1'50.865!#AragonWorldSBK pic.twitter.com/88eaE0zpqn

Michael Ruben Rinaldi (Team GOELEVEN) continued his recent impressive form with second overall the day, less than a tenth away from Davies’ time as the pair made it a Ducati 1-2 after Friday running. Reigning Champion Jonathan Rea (Kawasaki Racing Team WorldSBK) was third onboard his machine while teammate Alex Lowes (Kawasaki Racing Team WorldSBK) had an eventful afternoon session, improving his time from Free Practice 1 to finish seventh in the combined classification for the day despite a crash at Turn 14 with around 10 minutes left to go in the session.

Alvaro Bautista (Team HRC) was another who had an up and down day; his time in Free Practice 1 good enough for fourth overall but a crash and a technical issue in the morning session hampered the Spanish rider. Bautista did leave the pit lane during Free Practice 2 but did not set a lap time; instead doing out and in laps only. Leon Haslam (Team HRC) was classified in 11th for the day after showing some consistent pace across both sessions.

Tom Sykes (BMW Motorrad WorldSBK) started the weekend with a new contract for 2021 and showed why the BMW outfit has kept him for next year with fifth overall in the standings despite a technical issue in Free Practice 1. Teammate Eugene Laverty was down in 16th place, around 1.5 seconds off Davies’ pace.

Loris Baz (Ten Kate Racing Yamaha) was the fastest Yamaha rider in the field with sixth place overall, less than half a second away from the top time. Baz, who stood on the podium for the first time in six years in WorldSBK at Portimao, beat both factory Yamaha riders Michael van der Mark (PATA YAMAHA WorldSBK Official Team) and teammate Toprak Razgatlioglu; the pair classified ninth and tenth respectively.

Garrett Gerloff (GRT Yamaha WorldSBK Junior Team) finished just outside the top ten with 12th overall after the two practice sessions, with the American rider showing his potential at points throughout the sessions but unable to break into the top ten. His GRT Yamaha teammate, Federico Caricasulo, was classified in 14th place with Maximilian Scheib (ORELAC Racing VerdNatura) separating the two Yamaha riders.

Xavi Fores (Kawasaki Puccetti Racing) finished the day in 15th place, the first rider whose lap time was below the 1’52 mark. He was just over a tenth fastest than Marco Melandri (Barni Racing Team) in 17th with Roman Ramos (OUTDO Kawasaki TPR) finishing 18th on his return to WorldSBK action.