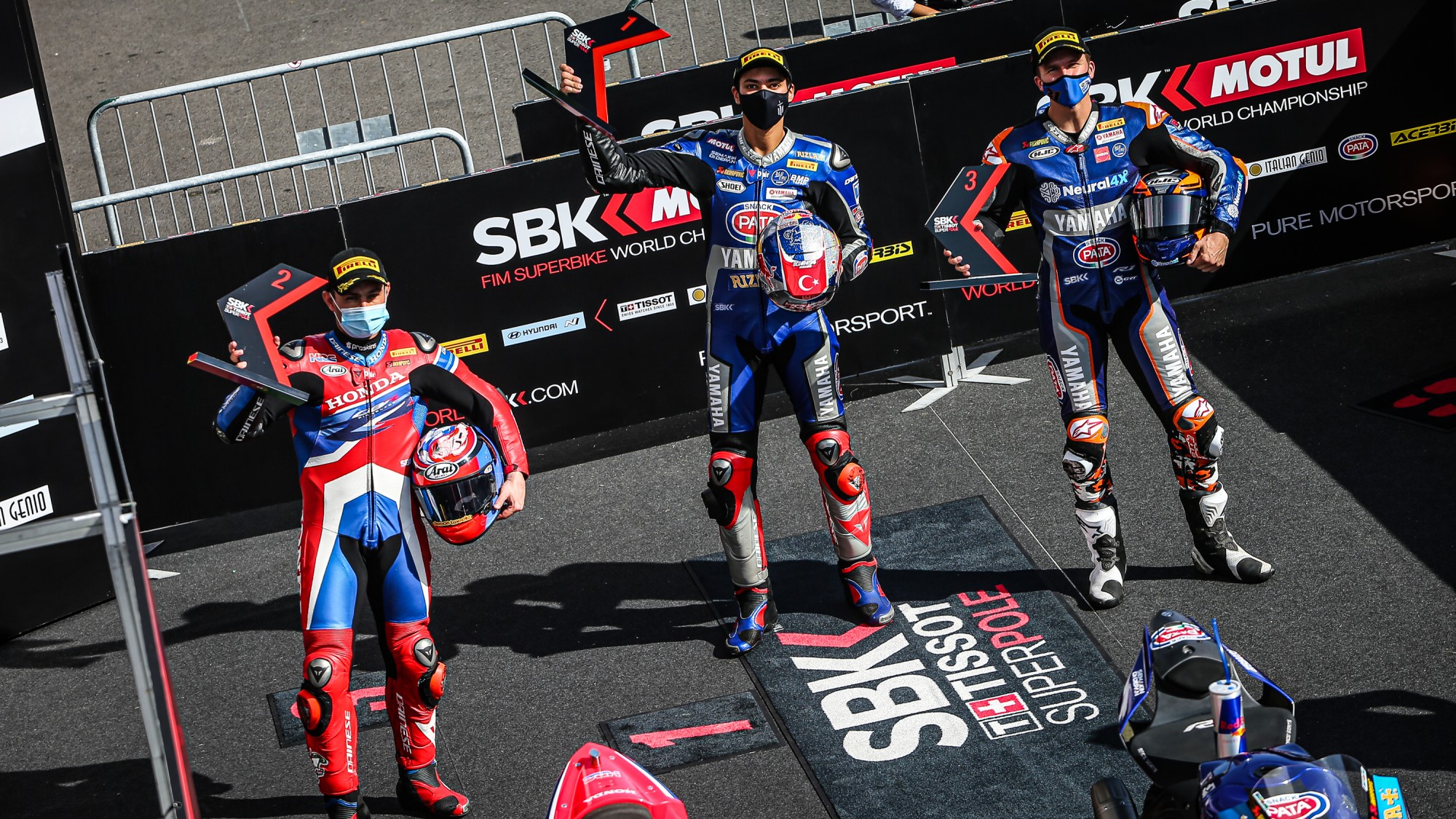 There was a Red Flag in the first five minutes of the session for gravel on the track but times continued to tumble when the action resumed with Turkish star Toprak Razgatlioglu (PATA YAMAHA WorldSBK Official Time) posting a 1’36.154s in the last few minutes of the session to claim pole ahead of Leon Haslam (Team HRC) and Garrett Gerloff (GRT Yamaha WorldSBK Junior Team); Haslam securing his first front row start since Magny-Cours in 2019 and Gerloff taking his best ever Superpole result and the first American on the front row since Nicky Hayden at Losail in 2016.

Chaz Davies (ARUBA.IT Racing – Ducati) took his best Superpole result of the season and will line up fourth on the grid for Race 1 and the Tissot Superpole Race, ahead of Michael Ruben Rinaldi (Team GOELEVEN) in fifth as the outgoing Ducati rider lines up alongside his replacement for 2021. Michael van der Mark (PATA YAMAHA WorldSBK Official Team) will start sixth and on the second row of the grid.

British rider Alex Lowes (Kawasaki Racing Team WorldSBK) will start from seventh place ahead of Alvaro Bautista (Team HRC) as both Honda machines qualified in the top ten; with Xavi Fores (Kawasaki Puccetti Racing) completing his final Superpole session with the Kawasaki Puccetti outfit in ninth, his best starting spot of the season.

Wildcard Jonas Folger (Bonovo Action by MGM Racing) will start from 11th place, just behind Tom Sykes (BMW Motorrad WorldSBK Team) and ahead of Loris Baz (Ten Kate Racing Yamaha); the Frenchman crashing at Turn 10 in the first half of the session but able to get back out on track.

Jonathan Rea (Kawasaki Racing Team WorldSBK) crashed out of the Tissot Superpole session at Turn 4 after the front of the bike folded under him; with the bike hitting the tyre barrier but Rea appearing to be okay after the crash. Rea was able to post a time before he crashed and will start the race from 15th. It means Rea’s streak of front row starts comes to an end at 16, one short of the all-time record, and the first time since Nurburgring in 2011 that Rea has not qualified inside the top ten.

Scott Redding (ARUBA.IT Racing – Ducati) suffered a crash just moments earlier when he had a highside at Turn 6; Redding unable to get his bike back to the pitlane after the spectacular crash and did not set a lap time. Also within the first five minutes of the session, Sylvain Barrier (Brixx Performance) crashed at the final corner and he was taken to the medical centre for a check-up following the incident before being declared unfit with concussion, but he is conscious. Matteo Ferrari (Barni Racing Team) will start in 17th place after having a crash at Turn 3 during the session.