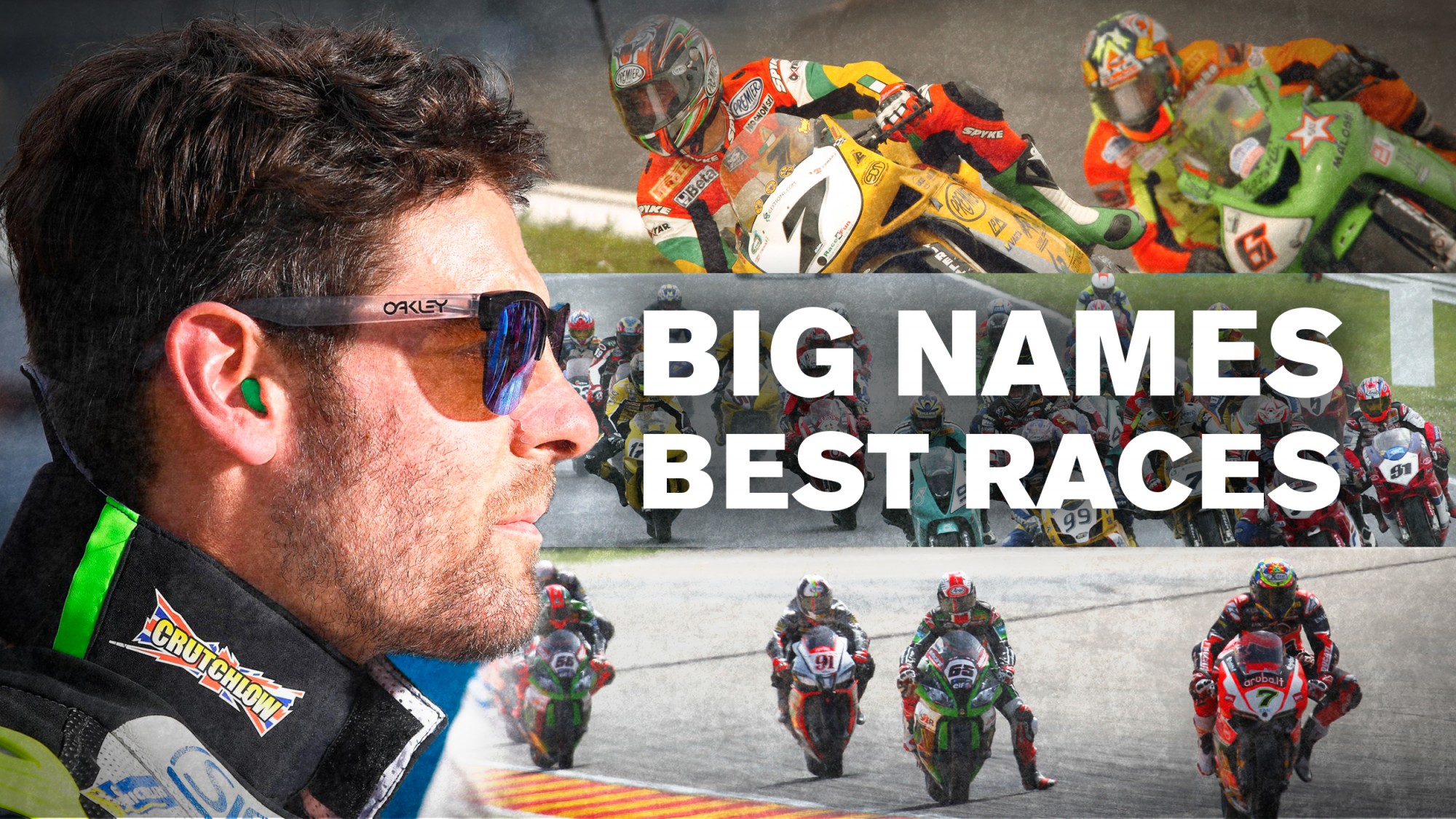 As part of the #StayAtHome campaign, the 2020 MOTUL FIM Superbike World Championship has been talking to paddock personalities for a new series of articles discussing favourite WorldSBK races which will be made available for you to watch. The first volume of this series includes MotoGP™ winner and former WorldSSP Champion Cal Crutchlow, who competed in WorldSBK from 2008-2010, WorldSBK star Chaz Davies (ARUBA.IT Racing – Ducati) and Pirelli’s Racing Director, Giorgio Barbier, giving their favourite WorldSBK races.

MotoGP™ star Cal Crutchlow selected Race 2 from Brands Hatch in 2000 from the first of two WorldSBK meetings at the British circuit. Held in August, it was a race won by Neil Hodgson in a thrilling battle with Troy Bayliss in front of a huge crowd, one of the traditions of the summer meeting. Crutchlow said: “My best WorldSBK race to watch was actually 2000 Brands Hatch Race 2 when Neil Hodgson won from Troy Bayliss and Frankie Chili. I remember standing in the crowd that day and I was only racing one year. It was only my second season of racing and I went there with some friends, stood on the bank of the main straight all day with 100,000 fans watching Neil Hodgson win.”

For Giorgio Barbier (Pirelli Racing Director), it was a race from Pirelli’s home country of Italy as he selected Race 2 from Misano 2004 – although Barbier did give a special mention to the first Pirelli one-two finish at the Hungaroring in 1989. Misano 2004 was a race held in mixed conditions following rain before the race, leading to different tyre strategies and adding to the excitement, as well as it being Pirelli’s first full year as sole tyre supplier. Barbier said: “In 2004, Pierfrancesco Chili raced with the private PSG-1 Corse team on a Ducati 998 RS, whereas the Ducati riders were James Toseland and Regis Laconi had factory bikes, plus another good Ducati was Noriyuki Haga.

“Before Race 2 it had rained a lot, it was April and the track wouldn't dry quickly. The riders had two rain tyres of different hardness and the intermediate (rubber always very badly treated due to its very limited window of use). On the grid, Haga and Toseland chose soft wet tyres, Regis Laconi and Steve Martin the hard wets and, to much surprise, Pierfrancesco Chili started from second position with the intermediate compound, making for a compelling race, but which tyre gamble would win this phenomenal race?”

It looked like the decision by Chili would backfire when he fell to 11th on the opening lap before fighting his way through the field. On Lap 14 of 25 he had battled his way into fourth place, then rapidly chased down both Martin and Haga who were running in second and third respectively. He made his way past Martin and Haga just over halfway through the race and began closing down Laconi, the long-time leader of the race. Chili made the vital, race-winning move on the last lap to claim a sensational victory at Misano; the last of his career.

Chaz Davies (ARUBA.IT Racing – Ducati) selected Aragon 2015 Race 2 for his favourite race; his first win with Ducati. Starting second on the grid, Davies got ahead of polesitter Jonathan Rea (Kawasaki Racing Team WorldSBK) to take the lead and, despite fierce competition, led throughout the duration of the race. Explaining his choice, Davies said: “I think probably one of the most special would be the first win for me with Ducati with the V twin at the time, in Aragon 2015. It was a good race anyway but more than that, it meant so much to me to win the race, my first with that bike.”

Charlie Hiscott, who is a presenter and pundit in WorldSBK for Eurosport UK, selected a three-way battle at the front for his favourite race from 1996 as he said: “My favourite race would be Hockenheim 1996 Race 2. Because Hockenheim was one of the greatest tracks in the Championship, it always produced great racing but in ’96 the battle between Carl Fogarty, John Kocinski and Aaron Slight was absolutely ruthless.”

Kawasaki Racing Team WorldSBK crew chief Pere Riba selected Donington 2017 Race 2 for his favourite race due to the comeback of his rider Jonathan Rea: “I cannot say it was one of the best races for the spectators but of course my appreciation of this race is overall the circumstances during the weekend. Jonny had a big crash, one of the biggest crashes of his career during Saturday Race 1.  It was in one of the fastest corners, going down at what was more than 200 km/h. The bike was 100% destroyed and we had to build a completely new bike for Sunday.

“The reason why I said Race 2 was also because at Donington Park, as everybody knows, the best rider was Sykes and he was also the teammate of Jonny and everybody knows that inside the team, there’s always a big rivalry.; Tom and Jonny have always been one of the biggest rivals in the Championship. The strategy we made with Jonny was to make a big effort on the first lap. He started 10 and passed second in the first lap and then he was leading all race.

Make sure to check back and find out who votes for which race in Volume 2!