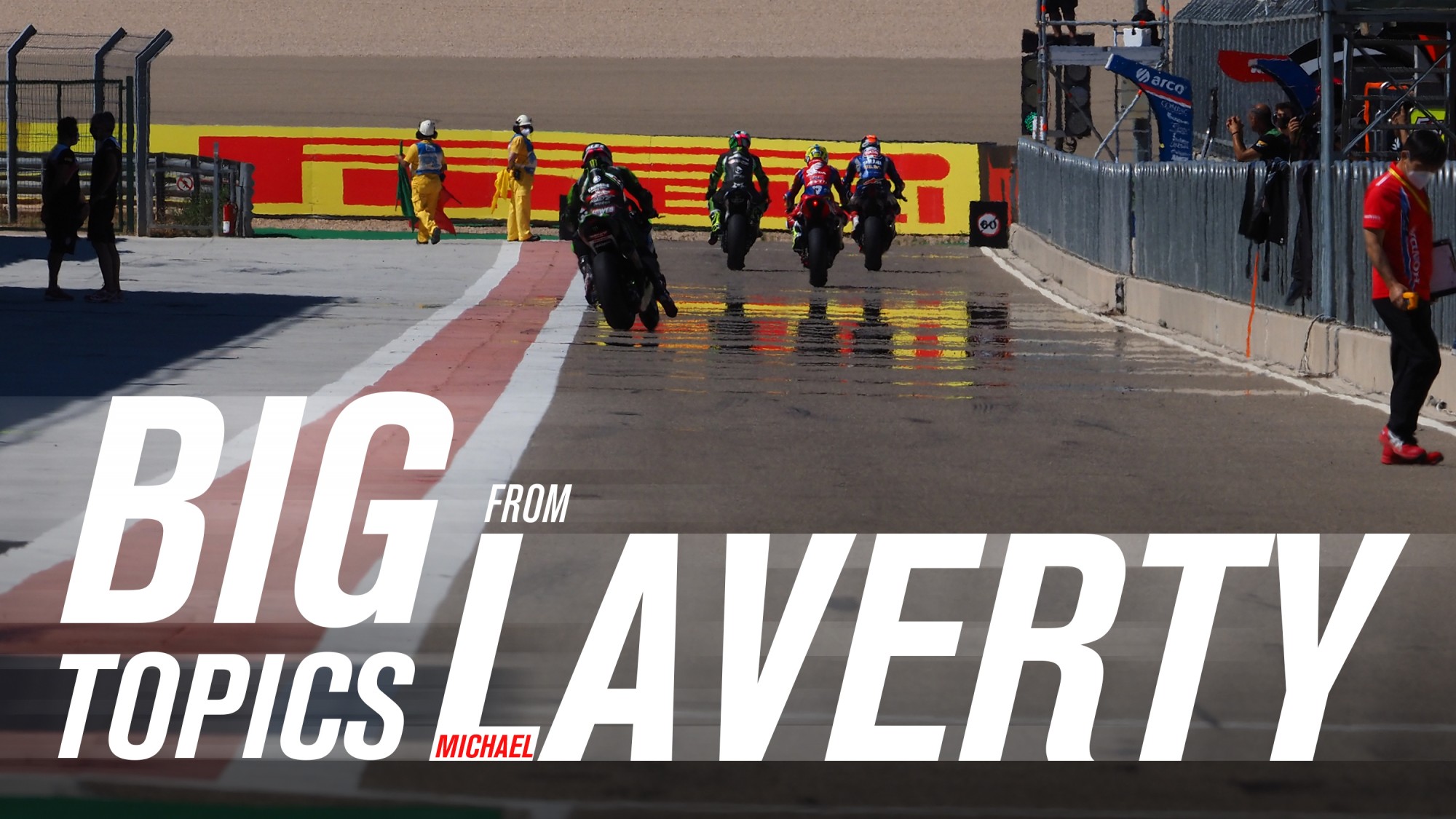 Spotting for Chaz Davies this weekend, an eagle-eyed Michael Laverty sat down to discuss the big talking points ahead of the inaugural Pirelli Teruel Round

They don’t come much more versatile, nor experienced across a variety of disciplines and Championships than Michael Laverty, brother of BMW Motorrad WorldSBK rider Eugene Laverty. A former MotoGP™ rider, BSB race winner, spotter for Chaz Davies and working for BT Sport in the Grand Prix paddock, Laverty has eagle eyes and is renowned for his technical insight and rider opinion. We chatted to him on Friday afternoon to get his thoughts from the key themes that shape the dynamics of the weekend ahead.

What’s the importance of back-to-back rounds the same track?

“It’ll be a good opportunity to have another crack of the whip for some teams and riders who perhaps didn’t get it right last weekend. Toprak Razgatlioglu and PATA Yamaha weren’t quite as strong as they had been in the previous rounds. There’ll be plenty of teams in the days off between the rounds who will have analysed the data and the footage and see where they went a little bit wrong in terms of strategy.”

Rea vs Redding: who will it be this weekend?

To be honest, it is hard to rule Jonathan out after how strong he was last weekend. Scott was impressive in Race 1 and it was a good Tissot Superpole Race, but he had a tricky Race 2. It is going to be tough to overhaul Jonny this weekend, but Scott just needs to stay in touch and then bounce back in Catalunya, a track that seemed to suit him really well in the test. It is a short season with Magny-Cours after Catalunya which is new to Scott, and then Estoril where Scott has more experience than Jonny, so it is all still to play for! Then, you’ve got Chaz in the mix too and Alvaro, and suddenly with both of those stealing points, it becomes very close. It is hard to call this weekend, but I’d still back Jonny.”

Heated battles from a rise in temperature…

“The temperature has come up slightly in comparison to last weekend, which changes how the bikes reacts. Even riders who may have felt that they had their setting dialled in last week may have to go back to work on set-up. It will only be small changes, like electronics or tyre pressure, but it still requires a change of approach. I think one person who will benefit from this is Alvaro Bautista (Team HRC), who was able to run the soft SCX tyre last weekend. When the temperature comes up, weirdly, with Pirelli, you get more life out of a softer tyre. That should give him more benefit and a few other riders where using it on Friday afternoon in the first exit.”

“To already be on the podium at a track they know well after a lot of testing is good, but the question is whether or not they have room to make another step this weekend if everyone else does. Alvaro will be strong again and so will Leon, and it’s great to see Honda looking sharp in WorldSBK again with the advanced electronic packages. The team are working out how to get all that power to the ground and figuring out the chassis, and whilst it is a time-consuming process on developing a bike to run at the front in World Superbike, I’ve been impressed with Honda’s progress so far in 2020 and it’ll be interesting to see if they can maintain that or step it up again.”

What’s missing for Eugene this year and what options has he got for 2021?

“Well, firstly I am not sure what options he has for next year, although there’s rumours of this satellite BMW team. In terms of this year, he just needs to get his head down. It’s a new package for him at BMW and he thought that when he got on it, it still needed a lot of development work. He’s been working hard on the electronics in the earlier rounds and there has been a significant improvement. Then, for whatever reason, after a test at Catalunya in high temperatures where he had good race pace and one-lap pace, he couldn’t replicate it at Jerez and Portimao – perhaps because he was trying to out-perform Tom. I think it was a combination of trying to run before he could walk with the new package, which slowed down the development. However, his lap times this weekend are a significant step forward compared to last week.”

Can Chaz Davies be a Championship contender if the results go his way this weekend?

“I think so, he is 69 points back at the moment and you’d probably need to be within 30 to be considered a real contender, but he is only four off Toprak, so he could gain that third place for sure and bring himself nearer to those top two. He has found some form and a better base-setting with the Ducati Panigale V4 R and I think he is feeling confident that he can score some strong points over the three races and then it is game on.”

Find out the answer to the big questions throughout the weekend with the WorldSBK VideoPass!