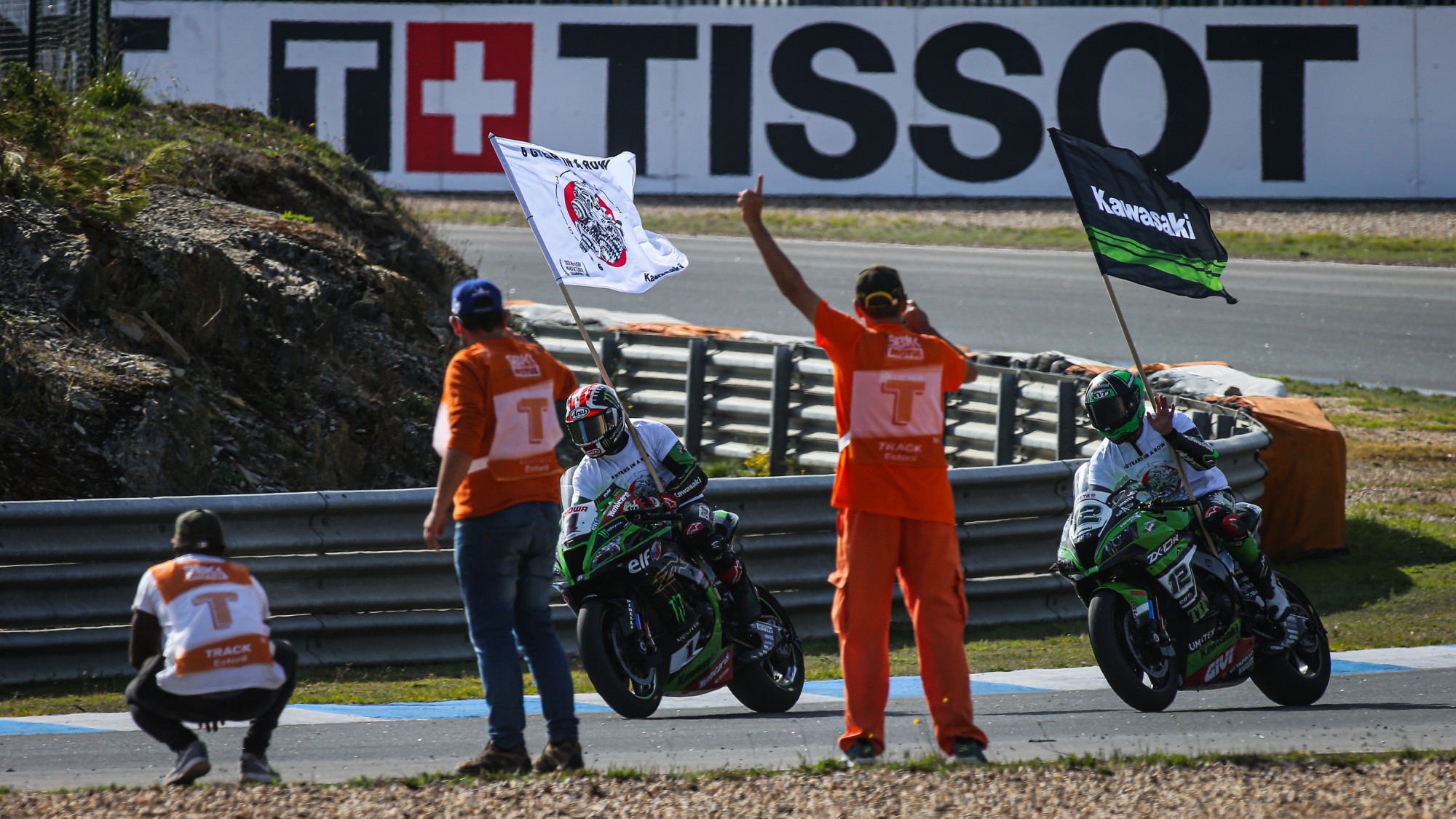 While the Riders’ Championship was sown up on Saturday in Race 1 when Jonathan Rea (Kawasaki Racing Team WorldSBK) finished fourth after fighting from 15th on the grid, the battle in the Manufacturers’ Championship went right down to the wire after a dramatic Race 2 full of twists and turns.

With both Rea and Alex Lowes (Kawasaki Racing Team WorldSBK) having crashed during the 21-lap race – Rea going down after battling with Toprak Razgatlioglu (PATA YAMAHA WorldSBK Official Team) for second but able to finish 14th while Lowes went down in a four-way battle for fifth place and retired – it came down to Xavi Fores (Kawasaki Puccetti Racing) to score the minimum seven points Kawasaki needed for the Championship.

Fores would eventually finish in eighth place, taking eight valuable points for the Japanese manufacturer as it edged Ducati by just one point; Chaz Davies’ (ARUBA.IT Racing – Ducati) emotional farewell victory for Ducati not enough to take the Manufacturers’ Championship away from Kawasaki.

The season started strongly for Kawasaki at Phillip Island as they burst into the lead of the Manufacturers’ Championship as both Rea and Lowes claimed victory at the season-opening round before the Championship was put on hold due to the ongoing health emergency around the world. Ducati did prove to be competitive Down Under with Scott Redding (ARUBA.IT Racing – Ducati) claiming three consecutive podiums on his debut weekend while Davies entered his seventh year with the ARUBA.IT Ducati outfit.

Racing resumed in August and Ducati had the stronger weekend with two wins and a second place Circuito de Jerez - Angel Nieto, closing the gap between the two marques to just two points with Rea taking sixth place; one of his lowest finishes ever for Kawasaki. A week later and WorldSBK was back in action at the Autodromo Internacional do Algarve and Rea bounced back in incredible style as he secured a hat-trick of wins across the Motul Portuguese Round, extending Kawasaki’s lead out to 28 points.

A gap of two weeks followed but the action soon returned with two rounds at MotorLand Aragon. The Prosecco DOC Aragon Round was first up and it was evenly matched between the two manufacturers: Kawasaki claimed victory in the Tissot Superpole Race and Race 2 while Ducati took Race 1 victory but two second places, behind Kawasaki, meant the gap was closed by one point. The Pirelli Teruel Round would throw things wide open as Michael Ruben Rinaldi (Team GOELEVEN) claimed his first victory in Race 1, adding valuable points for Ducati in the Championship while Redding took the Superpole Race win. Rea was able to bounce back in Race 2 with victory but, once again, Ducati had closed the gap on Kawasaki.

The first ever Catalunya Round was another evenly matched contest with one win apiece as Davies took his first of two wins in 2020 in Race 2, while Rea became the first WorldSBK winner at the Circuit de Barcelona-Catalunya in Race 1. Ducati outscored Kawasaki again as the gap came down to just 20 points with two rounds to go. The Pirelli French Round came with a change of conditions as warm and sunny weather was replaced by cold and wet conditions and this time Kawasaki was able to extend its lead in the standings with Rea taking two wins for Kawasaki in Race 1 and the Superpole Race while Redding took Race 2 victory. The gap was out at 26 points ahead of the final round of the season.

The Championship took yet another twist at the Pirelli Estoril Round when both Rea and Redding crashed out in the Tissot Superpole session as both started towards the back of the grid. Davies’ claimed second place in Race 1 with Rea in fourth as the gap came down by seven points. Davies once again beat Rea in the Tissot Superpole Race with the gap down to 18 points with 25 available from Race 2, before the twists and turns continued. Rea was battling for second when he crashed, eventually finishing 14th while Lowes retired after his own accident. Fores was the lead Kawasaki rider and needed to secure a top nine finish for Kawasaki, with the Spanish rider coming home eighth in his final race for Kawasaki Puccetti Racing.

In the end, the two marques were separated by just one point as a truly incredible year of WorldSBK action came to a close in the way it started: twists, turns, emotion and jubilation all on display throughout the season-ending Estoril Round.

You can relive the best bits of the 2020 season and watch the 2021 season with the WorldSBK VideoPass!