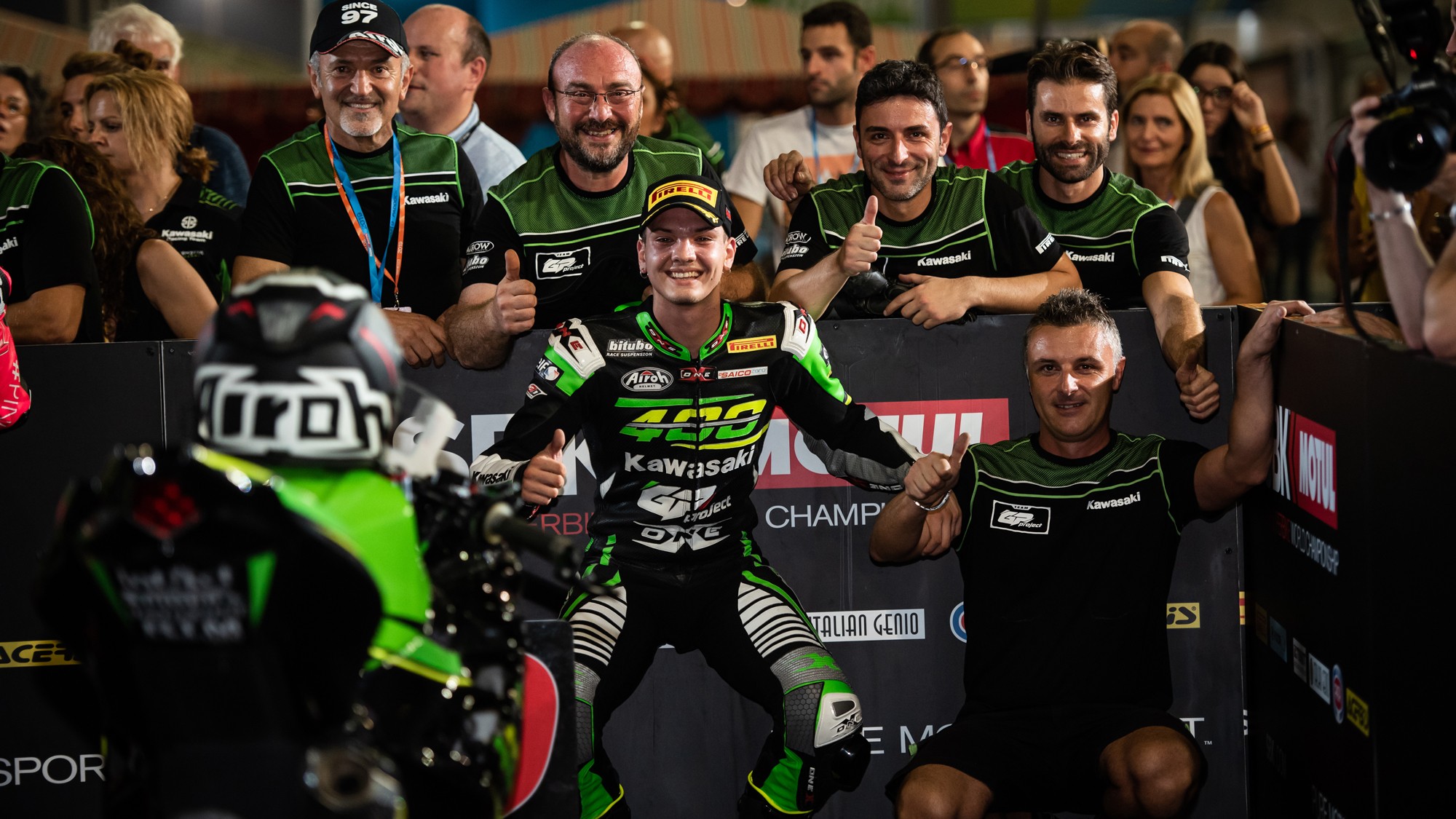 The Italian team has unveiled three of its four riders for the forthcoming WorldSSP300 season, with a race winner, a podium finisher and a class rookie set to battle it out!

The 2020 WorldSSP300 grid is filling up as the Kawasaki GP Project team announce their line-up for the forthcoming season. The Italian team, based in Spoleto, achieved a podium in the final race of the season at Losail with Bruno Ieraci, who is retained for next year. Alongside him in the garage will be race winner Kevin Sabatucci and CIV Supersport 300 rider Leonardo Carnevali. A fourth rider will compete for the team, but it is yet to be announced who.

Alessio Altai’s team will look to feature prominently at the top of the standings throughout next year, with Bruno Ieraci confirmed as staying with the team for next season. A season which has seen the Italian rider shine on Sundays, often racing through the pack to lead races, he will be one of the favourites for the Championship in 2020. Ending the season with a podium will fire the Italian up for great things in the future.

Having taken a win in 2019, Kevin Sabatucci is also looking to bring the team their first race victory. The Donington Park winner changes manufacturer for the new season and will be relishing the chance to build on a successful 2019 season. Having won races in CIV and finished third in the Championship in 2018, Sabatucci wants to return to the front for 2020 in WorldSSP300, putting all of his experience into practice be in his second full year in the World Supersport 300.

Leonardo Carnevali, from Saronno in Italy, will make his World Supersport 300 debut and hope for success from the start of the season. Giving the best of Italy’s young talent an opportunity to shine on the WorldSBK stage, the Kawasaki GP Project outfit could be a team to keep an eye on in 2020.

Speaking about his team line-up for 2020, Alessio Altai said: “I am very happy to be able to announce three quarters of our line-up for next season. Bruno will be with us for the second season, we will not start from scratch as in 2019 and we want to improve, starting from Qatar in which we got the podium, with the knowledge that we have the potential to aim for the top. We aim for the same with Kevin Sabatucci, a rider who has already won in the World Championship this season and with whom we are convinced we can make good progress in his first year with Kawasaki.

“Leonardo Carnevali will make his debut, he is a young driver who has grown a lot in the CIV and with whom we are happy to grow with. We will confirm the presence of this year, with 4 riders. We are evaluating the options, but in the meantime, we are happy to announce our first 3 riders and we are doubly happy that they are Italian, with a project that aims to enhance the young talents of our country!"

Ieraci and Sabatucci were the top two Italian riders in the WorldSSP300 class in 2019, in 11th and 12th respectively and separated by just four points. With both entering their second full-seasons in WorldSSP300, they could be a star duo at the front of the field, whilst Carnevali will aim to improve throughout the season.

Watch the 2020 WorldSSP300 season build-up throughout the winter with the WorldSBK VideoPass!