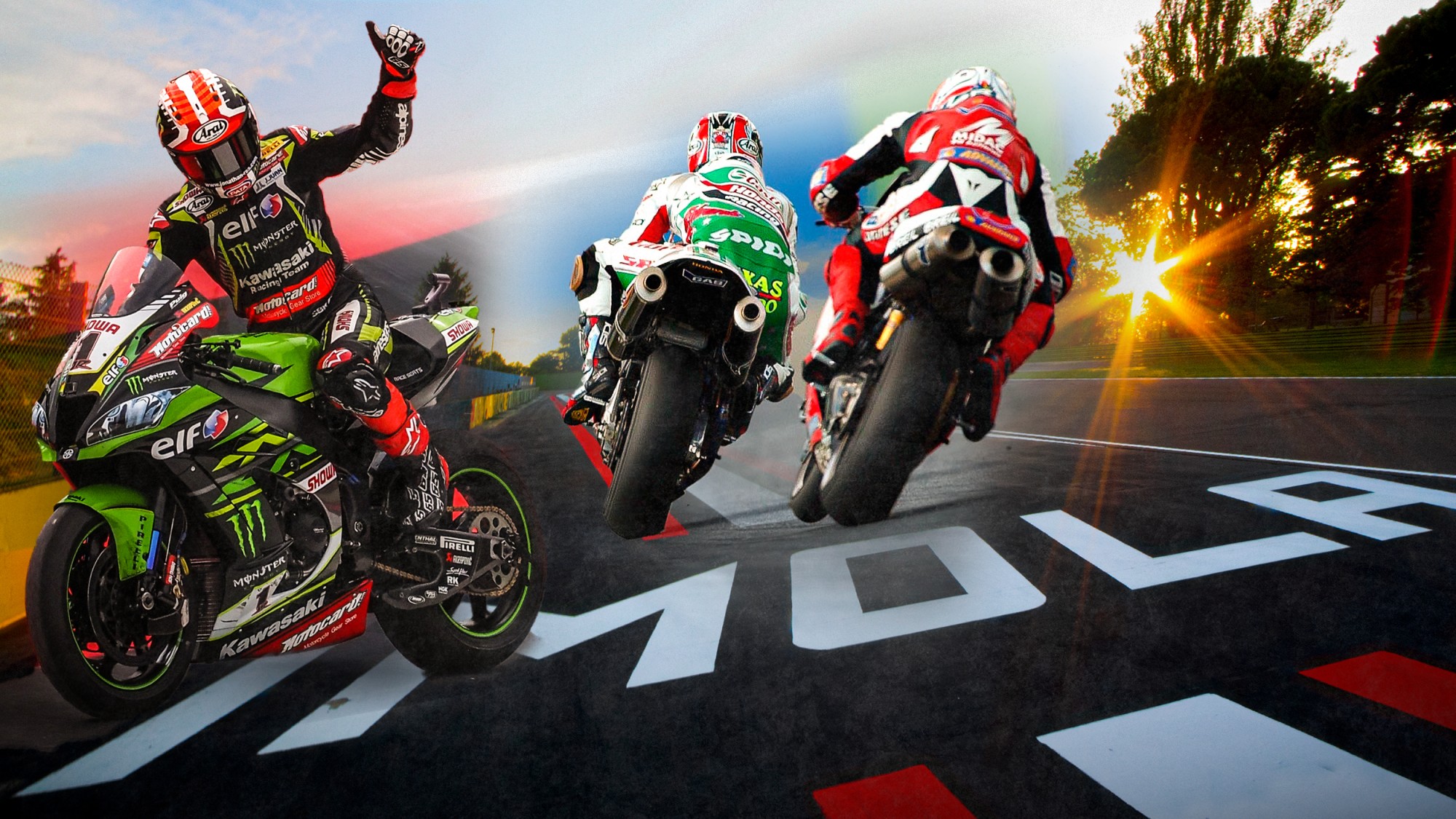 One of the most dramatic circuits with a unique backdrop and a timeless history, we revisit the best memories that played out on this hallowed turf

The 2020 MOTUL FIM Superbike World Championship has a longstanding relationship with the Autodromo Internazionale di Enzo e Dino Ferrari circuit in the historic town of Imola. Balconies as grandstands and terraces full of fans, there’s no place quite like the Italian circuit. Despite the cancellation of the 2020 event, we relive Imola WorldSBK glory; from the 2002 showdown modern dominance, there’s memories for all.

Everyone has a favourite Imola moment; for many fans it will be Imola’s 2002 title race. For others, it will be the feats of Jonathan Rea, with his 2014 double with Honda backed up a year later with Kawasaki and his record-equaling 59th race win in 2018. For Ducati fans, they’ll enjoy the achievements of Chaz Davies in 2016 and 2017, when he was unbeaten and on the top step of the podium. There have been other moments too, with the drama of Eugene Laverty’s scary crash in 2017, whilst also being the scene of Kenan Sofuoglu’s retirement a year later.

For WorldSBK, the story began in 2001 with the celebration of its first round. The last event on the calendar, rookie Rubén Xaus drew first blood at Imola with his Race 1 victory, amidst the chaos of Troy Bayliss and Regis Laconi crashing dramatically in the closing stages. Race 2 saw Laconi triumph to end a nine-year drought without a French winner, whilst becoming one of only a few riders to win in WorldSBK and 500cc World Championships.

In 2002, Troy Bayliss and Colin Edwards went head-to-head in one of the most dramatic season finales ever. It was a fierce duel between two great rivals, both eager for a second WorldSBK crown. A heroic last lap saw Edwards prevail in one of motorsport’s most iconic battles. Ducati went unbeaten in 2003 and 2004 with Xaus and Laconi respectively, before Vermeulen took the only win of 2005. However, 2006 saw the return of Troy Bayliss and despite only finishing fifth, he took the Riders’ Championship in front of the Ducatisti in Race 1. The winner of the race, Alex Barros, is still the only South American to win a WorldSBK race. Bayliss backed up his crown in Race 2 with a fine victory to cement his Championship crown.

In 2009, after a two-year hiatus, Imola returned and it was Marco Simoncelli who starred. Simoncelli came to WorldSBK following an injury to Shinya Nakano; Aprilia needed a replacement and ‘SuperSic’ didn't think twice. The 250cc World Champion crashed at Tosa in Race 1 due but in Race 2, he found himself fighting with his teammate Max Biaggi for third place. A bold pass at the last chicane gave him the last step on the podium behind Fabrizio and Haga, while Biaggi managed fourth. Biaggi made his own bit of history at Imola a year later, taking his, Aprilia’s and Italy first WorldSBK title.

2011 called and it was the turn of Carlos Checa to succeed. The favourite for the title since the beginning of the season, the Spanish star took a third position at Imola in Race 1 and a splendid victory in Race 2, putting one hand and a few fingers on the Championship trophy. He grabbed it fully a week later with a double at Magny-Cours, becoming the first and only Spaniard to be WorldSBK Champion.

Alvaro Bautista came into Imola for the first time in his career in 2019 and after 11 straight wins, the Spaniard was beaten in Race 1 by Jonathan Rea (Kawasaki Racing Team WorldSBK). A turning point in the Championship, Bautista was no match for the Ulsterman at Imola last year.

The Imola track is a staple fixture on the WorldSBK calendar and despite not being able to feature on the 2020 schedule, the track hosts many memories and we are ready to relive those moments this weekend.

Enjoy more fast-paced action when the Championship resumes with the WorldSBK VideoPass!