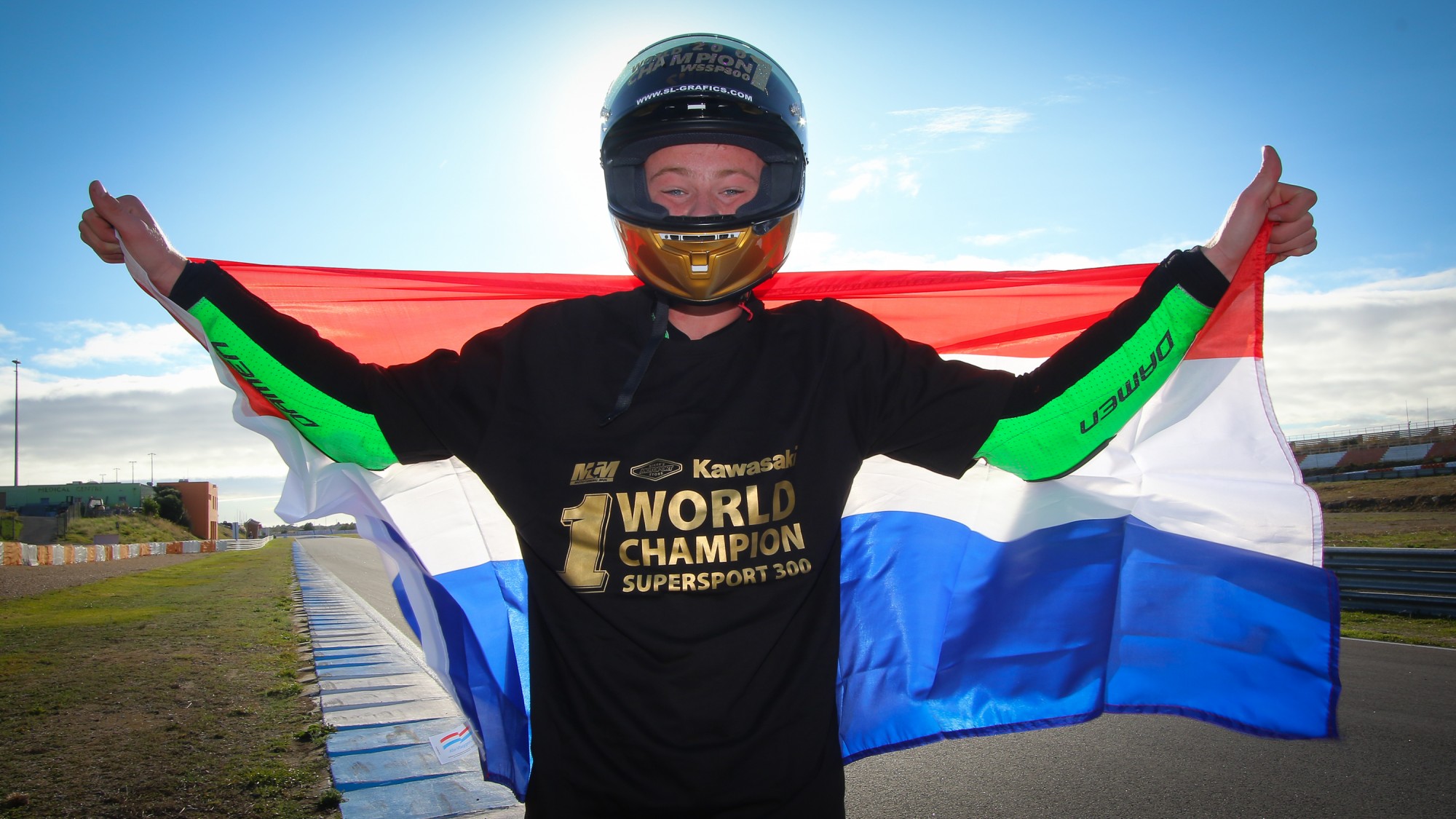 Following the double Dutch shoot-out for the title, one thing is certainly clear; the Dutch future in motorcycle racing is looking healthy again…

For the first time in the short but vibrant FIM Supersport World Championship history, there’s been a Dutch Champion. Coming into the final round of the season at the Circuito Estoril, there was guaranteed to be a Dutch Champion as Jeffrey Buis (MTM Kawasaki MOTOPORT) and teammate and fellow countryman Scott Deroue were in a two-way battle for the title, having been ahead of the game in the last couple of rounds. However, in the final metres of Race 1 at Estoril, Buis was able to pull out all the stops to take a stunning Championship victory by finishing sixth, pipping Deroue on the line.

However, The Netherlands have had plenty of success before this first title in the class; six different riders on the podium and three different winners, the Dutch have been one of the top performing countries in the class, along with Spain – which until this year, had taken every title. Deroue was the first winner for the country in the class in the first ever race in the Championship’s history, at MotorLand Aragon in 2017. In fact, he won the first two – winning at home at Assen ahead of fellow country Glenn van Straalen for the first ever Dutch 1-2, something that’s happened four more times since.

It isn’t just in WorldSSP300 where The Netherlands have had success, however. Michael van der Mark is the shining example that the northern European country can bring talent through the ranks of motorcycle racing. He was Dutch 125cc Champion back in 2008 and 2009 whilst three years later, he was STK600 Champion of Europe and from there, stepped into the world of World Supersport. In 2014, he was Champion in the class and then, in 2015, stepped up to WorldSBK as a rookie. Since 2018, he’s been a winner each season but in his trailblazing wake, he’s left a path for the next Dutch heroes to follow.

And then there’s the wider picture of successful Dutchmen in the World Championships overall, including MotoGP™. One of the household names across the last 30 years has been Wilco Zeelenberg, who took a first win in the 250cc class in 1990 and was a podium achiever throughout the 1990s before winning a WorldSSP race in the Championship’s first year at Monza, 1999. Before Zeelenberg, there was the likes of Jack Middleburg, Will Hartog – the first ever Dutch winner in the premier class in 1977 – and Boet van Dulmen.

However, whilst the history is majestic, the future is exciting and after some years away, the Dutch are getting serious again in terms of producing top class talent across the world. In WorldSSP300, Koen Meuffels (MTM Kawasaki MOTOPORT) has been a race winner and in 2020, has found good form whilst in years gone by in WorldSSP, it’s been Rob Hartog who took the Dutch flag to a strong showing. With the latest Dutch Champion in Jeffrey Buis now crowned at Estoril, who knows what the future holds for The Netherlands in the WorldSBK paddock? More wins, new Champions and historic achievements for the next generation to break? You wouldn’t bet against it…

Follow all of the off-season trials and tribulations in World Superbike with the WorldSBK VideoPass!