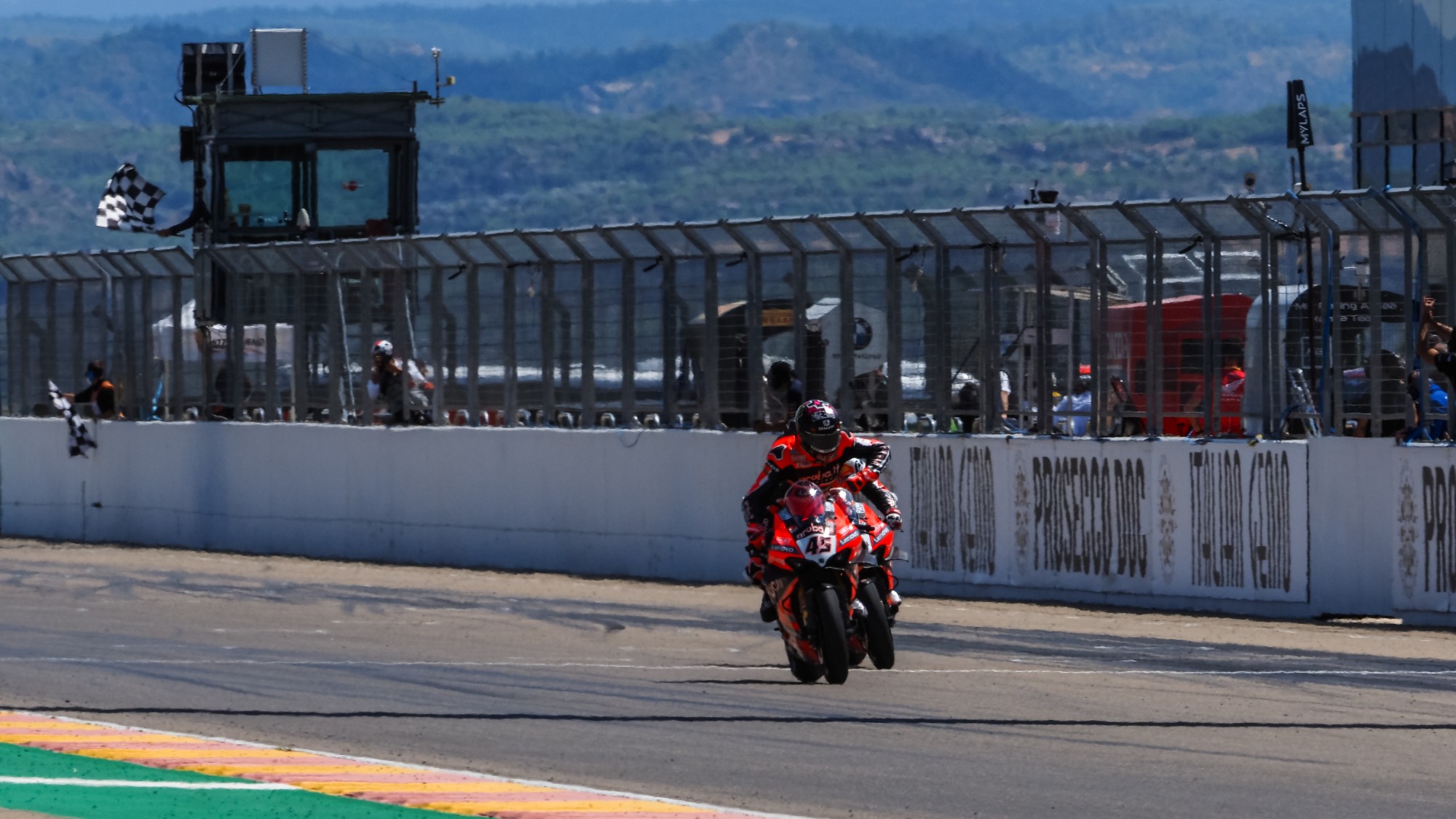 A titanic battle between the two Championship leaders ended with Scott Redding (ARUBA.IT Racing – Ducati) taking victory as well as the points lead in the MOTUL FIM Superbike World Championship after the sensational battle at the Prosecco DOC Aragon Round at MotorLand Aragon after holding off multiple challenges throughout.

Redding started the race from third place and held position in the early stages while polesitter Jonathan Rea (Kawasaki Racing Team WorldSBK) fought his way back through the field after a poor start, Rea back in the lead after just a couple of laps. Rea was passed by Redding on Lap 7 of 18 but was able to keep with Redding after the overtake although not able to make the move; the Ducati’s straight-line speed helping keep Redding ahead. As Rea continued to pressure Redding, the pair went side by side with Rea looking to make his way back into the lead but a mistake on Lap 14, where Rea went wide, allowed Redding to stay in front.

Davies was able to get by Rea just a few laps later and started to close in on Redding, finishing the race just three tenths behind Redding as they battled for the lead; the pair claiming a Ducati 1-2 finish after Davies battled through from ninth, with Rea claiming a podium on his 150th start for KRT. The result means Redding moves back into the Championship lead but with plenty of points still available to claim.

Michael Ruben Rinaldi (Team GOELEVEN) once again secured a fourth-place finish in 2020 as his impressive form continued, with the Italian rider putting on a late-race move on Michael van der Mark (PATA YAMAHA WorldSBK Official Team) finishing in fifth place. Toprak Razgatlioglu (PATA YAMAHA WorldSBK Official Team) was another rider who fought his way back through the field as he finished in sixth place, after starting outside the top 10, although finished ten seconds behind his teammate.

Loris Baz (Ten Kate Racing Yamaha) was classified in seventh place despite starting on the front row and taking the lead at the start as Baz looked for another podium in 2020. There was a battle between Baz and Xavi Fores (Kawasaki Puccetti Racing) towards the end of the race with the pair separated by just a second at the end of the race. Federico Caricasulo (GRT Yamaha WorldSBK Junior Team) finished in ninth place with Leon Haslam (Team HRC) completing the top ten.

It was a strong race performance from Leandro Mercado (Motocorsa Racing) as the Argentinian rider claimed an 11th place finished, ahead of Sylvain Barrier (Brixx Performance) in 12th. Roman Ramos (OUTDO Kawasaki TPR) marked his 100th WorldSBK start with a points finish as the Spaniard completed his first race since his return to the Championship, ahead of another mid-season returnee in Marco Melandri (Barni Racing Team). Takumi Takahashi (MIE Racing Althea Honda Team) secured his first points finish of the season with 15th in Race 1 at MotorLand Aragon and also claimed the team’s first points of 2020.

Eugene Laverty (BMW Motorrad WorldSBK Official Team) finished in 16th place after a dramatic rush to start the race; the Irish rider coming off his bike on the lap to the grid with the team fixing his machine on the grid. Laverty was given a ride-through penalty during the race but was able to finish ahead of Lorenzo Gabellini (MIE Racing Althea Honda Team).

Christophe Ponsson (Nuova M2 Racing) had a crash during the race at the corkscrew section which put the Frenchman out of the race on his Aprilia while Alex Lowes (Kawasaki Racing Team WorldSBK) also retired from the race; Lowes coming off his bike as he came over the crest of the hill. Tom Sykes (BMW Motorrad WorldSBK Team) pitted in the early stages of the race with the British rider retiring while Garrett Gerloff (GRT Yamaha WorldSBK Junior Team) also suffered a crash in the first half of the race. Alvaro Bautista (Team HRC) and Maximilian Scheib (ORELAC Racing VerdNatura) both retired from the race after separate incidents on the same lap.

You can follow more exciting WorldSBK action with the WorldSBK VideoPass! 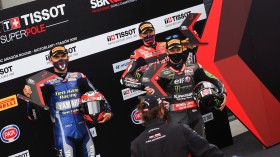