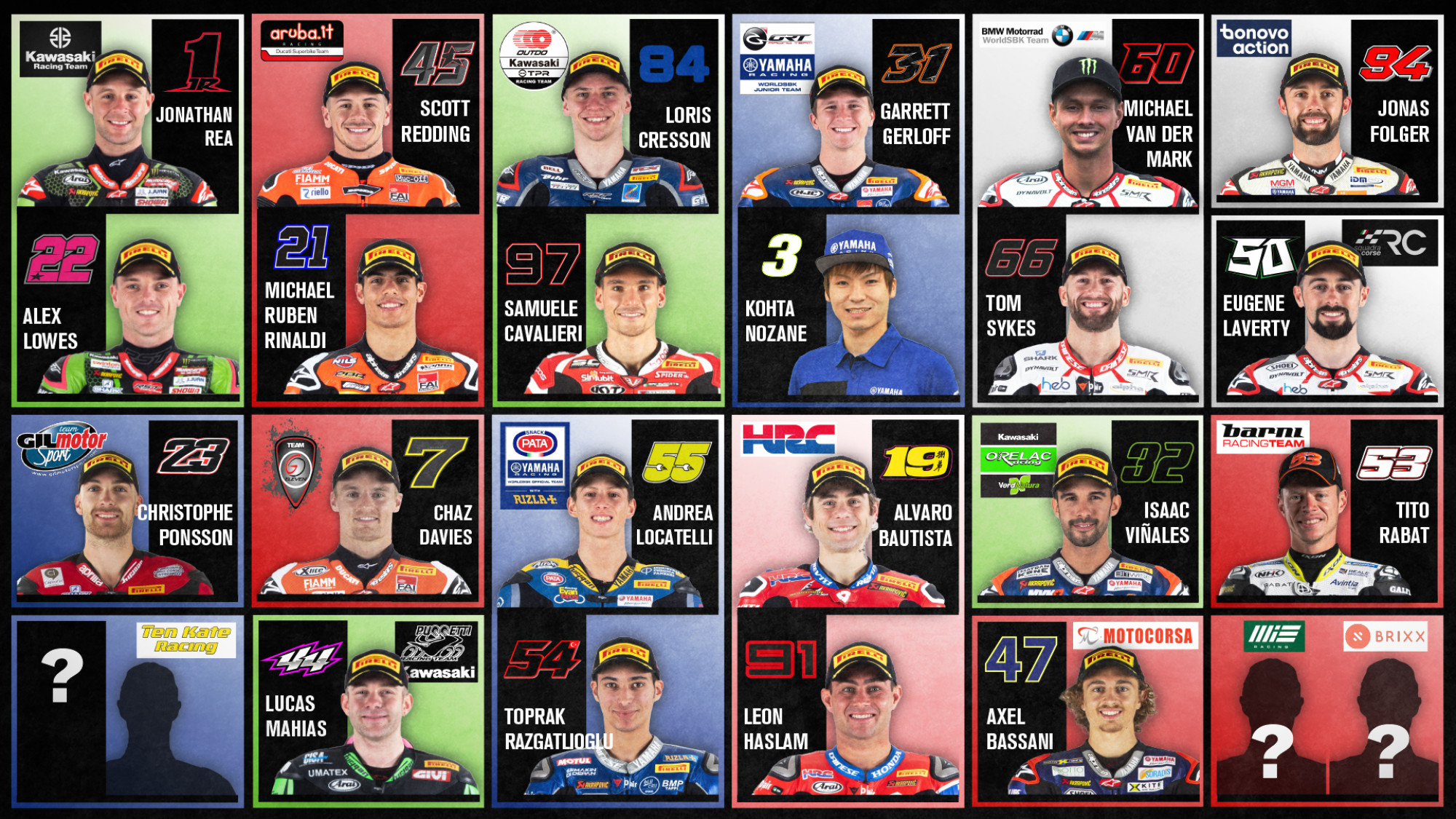 Up and down the grid, riders are preparing for 2021 and there are new teams and new faces lining up on the grid alongside familiar names...

There are just a few spots on the 2021 MOTUL FIM Superbike World Championship grid with most teams having now confirmed their riders for the upcoming season. While most seats have now been filled, there are still a few teams who have not yet confirmed their rider(s) for the 2021 season while some high-profile riders are still waiting to have their futures confirmed.

All five factory teams have confirmed their line-ups for next season with Jonathan Rea and Alex Lowes remaining at Kawasaki Racing Team WorldSBK and Alvaro Bautista and Leon Haslam staying at Team HRC; the only two manufacturers who have kept the same line-up for 2021 as they had in 2020.

The PATA YAMAHA WorldSBK Official Team has one new rider for the 2021 season with Andrea Locatelli making the step up to the factory Yamaha team after a stunning debut WorldSSP campaign; the Italian replacing Michael van der Mark who is heading to BMW Motorrad WorldSBK Team to partner Tom Sykes. There is change at ARUBA.IT Racing – Ducati too as Michael Ruben Rinaldi moves from Team GOELEVEN to replace Chaz Davies. Team GOELEVEN will be represented on the grid by WorldSBK stalwart Davies, effectively completing a straight swap with Rinaldi.

American star Garrett Gerloff will continue for a second season at GRT Yamaha WorldSBK Junior Team, joined in 2021 by a new teammate as Japanese rookie Kohta Nozane enters the WorldSBK paddock for the first time. Federico Caricasulo will return to WorldSSP action as he joins GMT94 Yamaha for a 2021 title challenge.

Locatelli is not the only rider moving up from WorldSSP after a strong 2020 season with Lucas Mahias sticking with Kawasaki Puccetti Racing for 2021 but in WorldSBK rather than WorldSSP, while Isaac Viñales graduates with ORELAC Racing VerdNatura. Another rider making the step up from WorldSSP is Axel Bassani, who will link up with the Motocorsa Racing team for the 2021 season.

There are currently three teams who entered WorldSBK full-time in 2020 who have not confirmed their line-up for the 2021 season, including Ten Kate Racing Yamaha; who duelled it out for Independent honours for both team and rider with Team GOELEVEN. While Rinaldi has his future sorted, Loris Baz, who claimed four podiums for Ten Kate Racing in 2020, is still waiting for confirmation on his future. Brixx Performance’s plans are still yet to be confirmed alongside Ten Kate. Takumi Takahashi competed for MIE Racing HONDA Team in 2020 but nothing has been confirmed about where his future will be.

The BMW satellite setup has now been confirmed with two teams competing in WorldSBK using BMW machinery alongside the factory team with Eugene Laverty competing for RC Squadra Corse and Jonas Folger with Bonovo Action after impressing during two wildcard appearances in 2020.

Fresh from competing in three wildcard appearances throughout 2020 using Aprilia machinery, Frenchman Christophe Ponsson will return to the grid but this time on a Yamaha as he joins the grid for a full-season assault with Team Gil Motor Sport.

OUTDO Kawasaki TPR will keep Loris Cresson at the team for 2021 and 2022 after the Belgian rider made his debut in WorldSBK for the team at the season-ending Estoril Round before continuing to test for the team at Jerez and MotorLand Aragon in November. The team expands to two bikes in WorldSBK as Italian Samuele Cavalieri will make his full-time debut in WorldSBK in 2021, becoming the ninth rookie on the grid. Moto2™ World Champion Tito Rabat will make his WorldSBK debut in 2021 after signing with the Barni Racing Team having competed in MotoGP™ since 2016; the Spaniard will compete on a Ducati Panigale V4 R with Barni.

Relive the incredible 2020 season and look ahead to 2021 with the WorldSBK VideoPass!