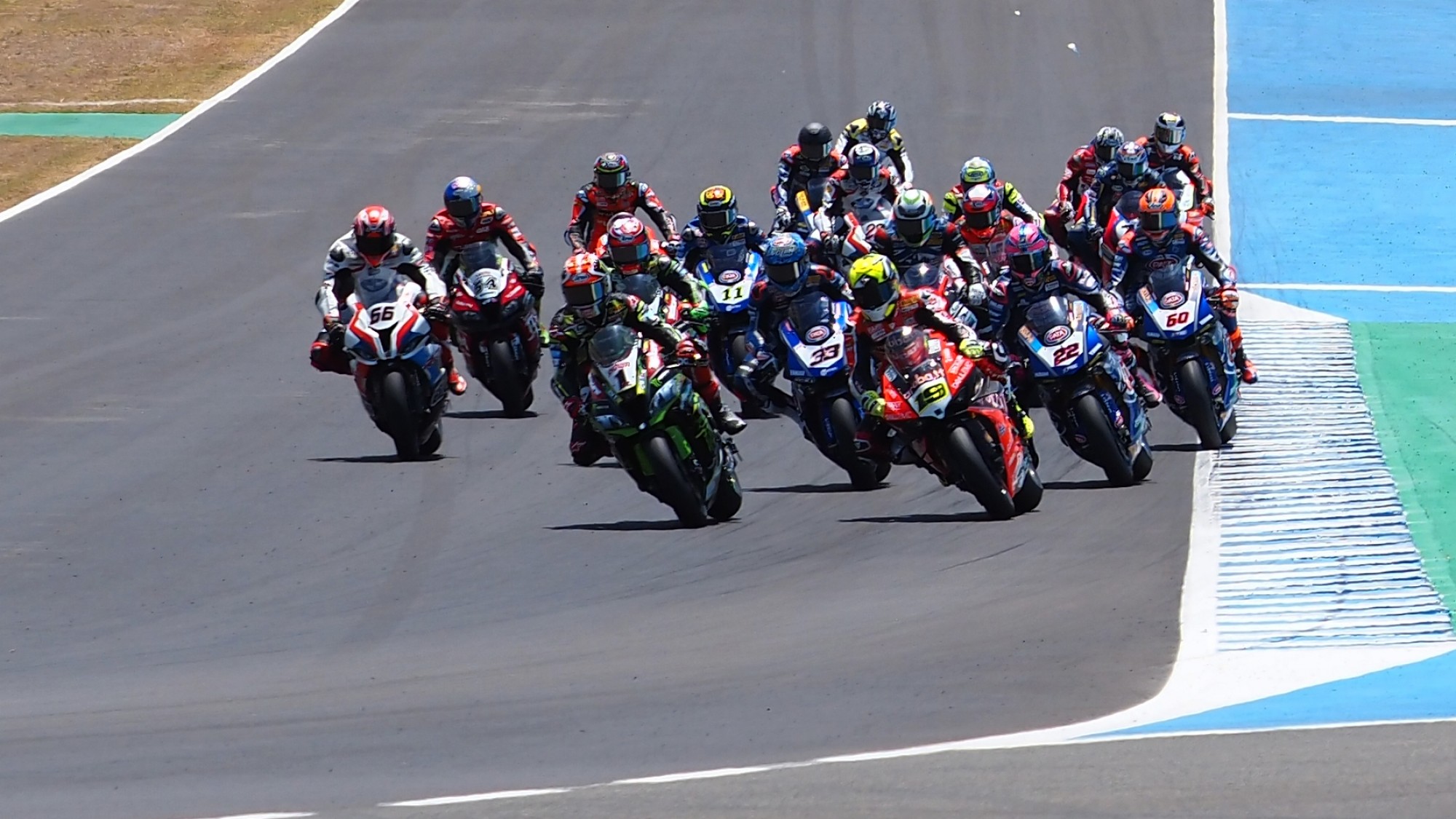 Summer solstice, 25-30 °C, blue skies, the seaside a stone’s throw away… What more can you want from a weekend, other than stunning, elbow-to-elbow racing? Well, that was also available in abundance last Round and promises to be to be par for the course at the Misano World Circuit Marco Simoncelli, a venue which is never short of sizzling on-track clashes.

The MOTUL FIM Superbike World Championship heads back to Italy for the first of three rounds inside four weeks. The season is moving forwards at breakneck pace and mistakes are becoming costlier than ever. Just ask the two championship frontrunners. Before Jerez, there were few visible cracks in Álvaro Bautista (Aruba.it Racing – Ducati) or Jonathan Rea’s (Kawasaki Racing Team WorldSBK) respective armours, as they waltzed onto the rostrum in every single race so far.

But then there was Spain. One rider crashed whilst leading, unopposed; the other was forced into an uncharacteristic mistake that very nearly ruined his weekend. Is the tension of the title race getting to the top men? Or was Jerez a one-off, a two-pronged lightning bolt which won’t strike again? They have both visited Misano more times than they can remember, but then again, that was the case for Jerez too. Continued issues and misfortune for teammates Chaz Davies (Aruba.it Racing – Ducati) and Leon Haslam (Kawasaki Racing Team WorldSBK) will be another cause for concern for both teams as we edge closer to do-or-die time.

Either way, Michael van der Mark (Pata Yamaha WorldSBK Team) was the person who profited the most from the other two’s woes, yet it would be foolish to think that he needed any assistance. The Dutchman was on another level at the Spanish circuit and broke his duck for the year, just over twelve months since his Donington double, by simply riding perfectly all weekend. The YZF R1 itself was also up for the challenge, highlighted by Alex Lowes’ (Pata Yamaha WorldSBK Team) equally admirable pace – unfortunate incidents aside. If the blue bike is capable at last of beating the Ducati and Kawasaki week in, week out… Then who said the fight for the championship will be a two-horse race come Autumn?

Conversely, after Thailand many thought that the Independent Riders’ championship would be decided between a pair Yamahas, Marco Melandri and Sandro Cortese (GRT Yamaha WorldSBK). It was a bold assumption to make and one that Toprak Razgatlioglu (Turkish Puccetti Racing) seems committed to proving wrong, as he sits just seven points behind the rider from Ravenna and twelve ahead of the German rookie. After taking third in Imola’s Race 1, the Turkish starlet stated that he needed more podiums. Well, he’s got two now, and we’re just six rounds in. At this rate, Razgatlioglu will be shifting his focus towards a greater goal very soon, perhaps as soon as this weekend.

The fact that it’s a home round for the Puccetti squad may help his case, but in fairness Misano is a home round for a large share of hungry challengers, including a long-time rival of Razgatlioglu’s: Michael Ruben Rinaldi (BARNI Racing Team). The 23-year-old scored his personal best WorldSBK result in Jerez (4th in Race 2) and is growing each and every race on the V4 R. Squad resources will be split at Misano, however, as Michele Pirro joins Rinaldi inside the BARNI squad. Experience versus youth, national champion versus world stage hopeful – another thrilling duel to look out for in Italy.

And then there’s the BMW Motorrad WorldSBK Team, who – whisper it – are edging ever closer to the top positions. Jerez was a relatively quiet weekend for Tom Sykes (BMW Motorrad WorldSBK Team), yet that was perhaps more down to other teams’ ups-and-downs and overall chaos than to the Yorkshireman’s performances themselves. In fact, Sykes scored more points than at any other Round this year, a sign that the project is chugging along according to plan. The 2013 World Champion seems happy and with more updates for the S1000 RR potentially arriving in the near future, it may become hard to rub the smile off his face.

BMW have been edging further and further away from Honda in the Manufacturer’s Championship, as the Japanese manufacturer endured a weekend of disappointment in Jerez. With Leon Camier’s (Moriwaki Althea Honda Team) status still uncertain, it could be up to Ryuichi Kiyonari (Moriwaki Althea Honda Team) to once again guide the HRC-backed outfit into the battlefield in search of a breakthrough.

It’s all about to kick off again in Italy! Summer officially starts for our Northern Hemisphere fans on June 21st and so does the Pata Riviera di Rimini Round, with FP1 and FP2 set for Friday. The Tissot Superpole will decide the grid for the next two races in Italy: Race 1 on Saturday 22nd (14:00 local time, GMT+2) and the Tissot Superpole Race on Sunday 23rd (11:00 LT), before Race 2 pulls down the curtain on Round Seven at 14:00 LT. Watch all of these sessions LIVE and OnDemand thanks to WorldSBK VideoPass!