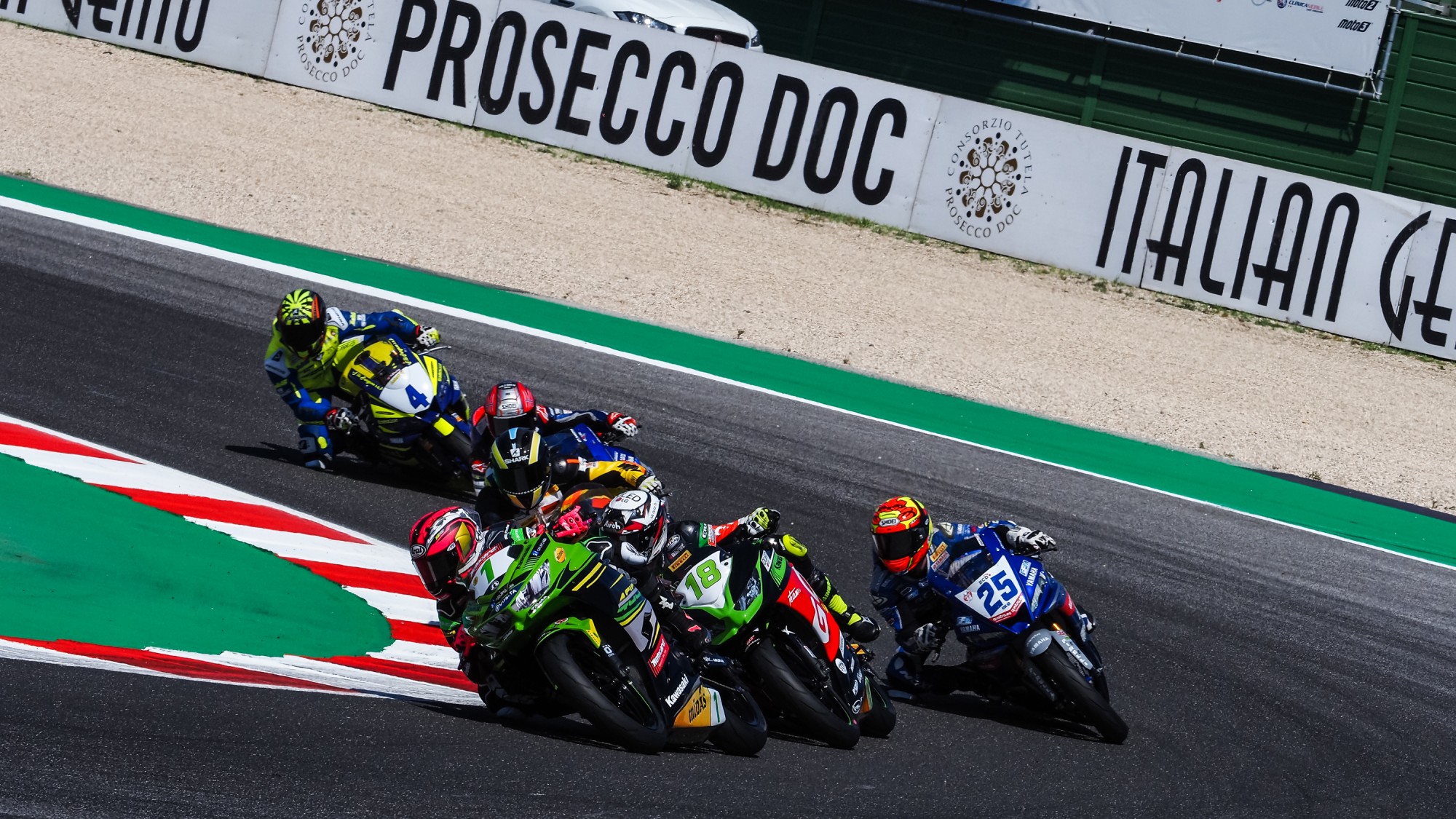 A phenomenal year of last lap battles and high-class records is already over the halfway mark, so what are the stand-out moments from 2019?

The 2019 Supersport 300 World Championship has been an amazing spectacle, with numerous winners, podium finishers and a truly international array of talent at the front of the field. With two-thirds of the season complete, it is time to look back over the drama of the class and remember some memorable moments from the season so far, and just how there is a possibility of Manuel Gonzalez (Kawasaki ParkinGO Team) wrapping the championship up at Portimao.

Gonzalez came into the season without a race win but in the opening Motocard Aragon Round, the 16-year-old Spaniard came out on top and took his first win, passing Huge De Cancellis (Team Trasimeno Yamaha) in the final corner on the final lap to edge home ahead of the Frenchman – who in-turn, took his best result of his career and a first podium, with Scott Deroue (Kawasaki MOTOPORT) completed the top three. Reigning Champion Ana Carrasco (Kawasaki Provec WorldSSP300) crashed out in the middle of the race, a disaster for her title defence.

The following round a week later at the TT Circuit Assen in The Netherlands was also a cracking race, with an all-out brawl at the front of the field taking shape. Heading into the final chicane, a resilient Gonzalez held off Scott Deroue and Jan-Ole Jahnig (Freudenberg KTM Junior Team) to take a second victory and, with a second podium, Scott Deroue emerged as the early challenger to young Gonzalez.

At Imola, the race was cancelled due to the atrocious weather on Sunday, making for a double-header at the Acerbis Spanish Round at Jerez, with more action coming the way of WorldSSP300. The first of the two races was all about the resurgence of experience, with 2017 WorldSSP300 Champion Marc Garcia (DS Junior Team) taking his first win of the year, ahead of Deroue and Ana Carrasco, who took her first podium of the year. The second race was dramatic, with Manuel Gonzalez winning it on the line ahead of Garcia and Carrasco, whilst Scott Deroue could only manage 23rd. The advantage coming into the round for Gonzalez was a slender 14 points but leaving, it was 32.

With the Misano World Circuit “Marco Simoncelli” calling, the WorldSSP300 championship was set for more action, this time with another different winner. Ana Carrasco used all her experience to good effect as she made perfectly timed passes on her opponents to break ever-so-slightly clear ahead of the final lap. She was closed up on in the final moments of the race, but not enough to be beaten. Manuel Gonzalez finished behind the reigning WorldSSP300 Champion, whilst Andy Verdoïa (BCD Yamaha MS Racing) was in third, ahead of Indonesia’s Galang Hendra Pratama (Semakin Di Depan Biblion Motoxracing). Carrasco moved second in the championship and 43 points behind Gonzalez.

The final round before the Summer break was soon upon the WorldSSP300 field, at Donington Park in the UK. Manuel Gonzalez was out of the round after a Tissot Superpole crash, whilst Scott Deroue was taken out in the Last Chance Race my wildcard Kade Verwey (Team XG Racing), meaning that it was all down to Carrasco in the main Sunday race to close the championship up. She went on to finish just 19th, meaning the gap at the front in the championship remained the same.

Kevin Sabatucci (Team Trasimeno Yamaha) took a career-first win, ahead of Andy Verdoïa and Nick Kalinin (Nutec – RT Motorsports by SKM – Kawasaki) – the Ukrainian rider taking his first podium in two years. Inside the top ten were seven personal best results and eight different nationalities, whilst for the first time in any class in the WorldSBK paddock, there was a Brazilian pole-sitter with Ton Kawakami (BCD Yamaha MS Racing). Kawakami and Verdoïa were first and second on the grid but last-minute tyre pressure check failures put them at the very back, making Verdoïa’s second place finish even more astounding.

Other highlights from the WorldSSP300 season so far include the nine different podium finishers from five different nationalities, whilst the try-hard attitude from Galang Hendra Pratama has been one of the main features of the year. Struggles for previous race winners Koen Meuffels (Freudenberg KTM WorldSSP Team) and Mika Perez (Scuderia Maranga Racing) have been notable, whilst the incredible comebacks produced each round from the likes of Bruno Ieraci (Kawasaki GP Project) have made for thrilling action. As the championship goes to Portugal, Gonzalez could well be champion with two rounds still to go: can he secure the WorldSSP300 crown with two rounds to spare?

Find out all you need to know in WorldSSP300 and the rest of the World Superbike paddock with the WorldSBK VideoPass!