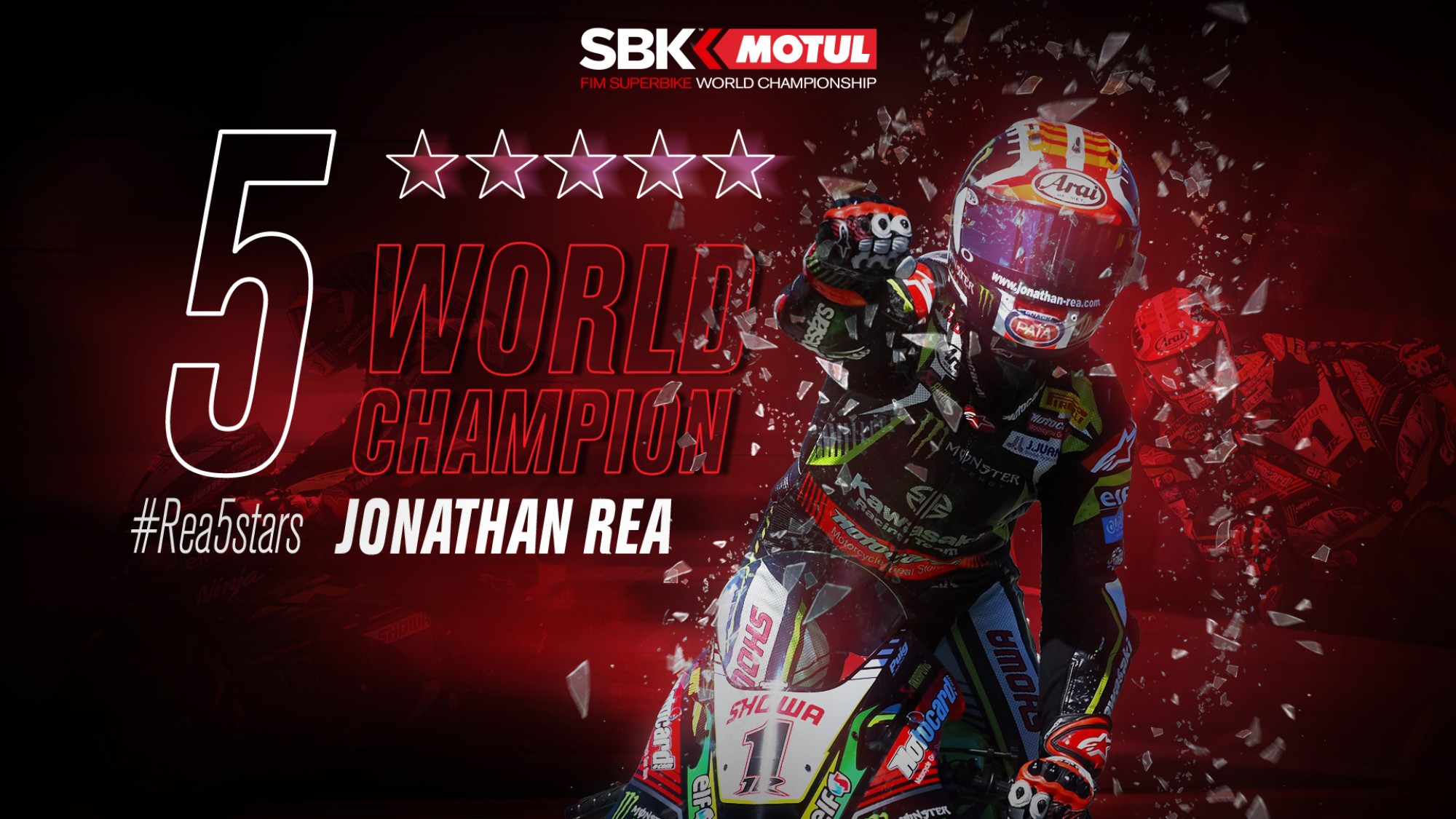 After starring in one of the most remarkable comebacks in motorcycling racing history, Jonathan Rea (Kawasaki Racing Team WorldSBK) can finally lay claim to being the first-ever five-time MOTUL FIM Superbike World Champion, securing the 2019 crown in sensational fashion at the Circuit de Nevers Magny-Cours.

The rider from Ballymena, Northern Ireland has overcome perhaps his most formidable foe to date on course to taking his fifth crown. Álvaro Bautista’s (Aruba.it Racing – Ducati) blazing introduction to the series left many onlookers startled and ready to hail the start of a new, #19-led era. But Rea faced the challenge like a true champion by biding his time, picking up podium finishes and waiting for the moment to pounce. When he did it was with razor-sharp precision, turning around a 61-point deficit in the blink of an eye and wrapping up his fifth title with two rounds to spare.

With this title win Rea becomes the undisputed king of the WorldSBK history books, holding a record number of championship wins, race wins and career points, amongst other accolades picked up in his 11-season-long WorldSBK career.

As has been the case for several other greats of two-wheel racing, Rea’s first steps in the paddock were made in WorldSSP. Taking the runner-up spot in his rookie season, he was quick to make the step up to World Superbike one season later alongside Ten Kate Honda, marking the start of a six-year-long, character-building spell onboard the Fireblade.

His performances in each one of those seasons propelled him to the factory Kawasaki bike ahead of the 2015 season. The rest, as they say, is history. No matter the circumstances, the rivals, the regulations, Rea has always managed to finish the calendar year on top.

Yet one could forgive him for rating this championship win above the others, considering how the year began. Pre-season testing had Rea as the odds-on favourite for the title, but all that changed once Phillip Island rolled around: Bautista romped through to an incredible three race wins, leaving Rea and new teammate Leon Haslam to scrap for the remaining podium positions. Buriram and Aragon confirmed that this was not a one-off, and despite Rea’s best efforts he was again forced to be content with second position.

Many of his fans set their faith on Round 4 at Assen – Rea’s favourite playground since joining WorldSBK. Yet after a stroke of misfortune in qualifying (and the Saturday snowstorm saga), he was faced with an uphill battle from eighth on the grid. Not only were the race wins just out of reach, but he was also beaten to the line in Race 2 by home hero Michael van der Mark.

Four rounds and 53 points down, a short-lived revival began at Imola with his first two wins of 2019, yet once again luck abandoned Rea with the cancellation of Race 2, denying him a possible hat-trick of wins.

Jerez followed four weeks later, and with it came perhaps the most frustrating moment of the 32-year-old’s year, if not his Kawasaki career. Riding in fourth in Race 1, he misjudged a move over Alex Lowes in the final lap, knocking the Yamaha rider into the gravel. A clearly distraught Rea was knocked off the Race 1 podium and forced to start the Tissot Superpole Race from the back of the grid – any title challenge was on its last legs.

And then Bautista crashed in Race 2. Rea finished in second place again, but little did that matter. There was hope; the comeback was on.

With Misano came the rain and with the rain came a water masterclass by Rea to reduce the gap with his Ducati rival by a further nine points. A bizarre tumble in the Superpole Race handed the momentum back to Bautista, but it ended abruptly as the Spaniard crashed out of Race 2 in identical circumstances to Jerez. This time, Rea managed to beat Toprak Razgatlioglu to the line to take his fifth win of the year.

Donington Park was next on the calendar and as rain returned to the fore, so did Rea to the championship lead: Bautista highsided out, the Kawasaki rider won unopposed, and suddenly the #1 was back on top. On Sunday, he reinforced that statement with the first hat-trick of his WorldSBK career.

The dream run continued at Laguna Seca while Bautista endured his own personal nightmare. Two wins and a runner-up spot for Rea to the Spaniard’s three DNFs meant a 57-point swing in 24 hours and one half of the championship trophy in the Northern Irishman’s hands. From 61 down to 81 up in just ten races, this was now his title to lose.

The return from the summer break saw Bautista return to winning ways at Portimao, but not before Rea had won two races of his own, leaving the gap at 91 points with three rounds remaining.

Needing a 125-point lead out of Magny-Cours to mathematically confirm his championship win, it may have seemed like a tall order to finish the fight off in Europe – but then again, so did winning the championship at all a few months earlier. France and WorldSBK title wins go hand in hand, and once again, against all odds, 2019 was no exception: Rea was crowned for the third year in succession at Magny-Cours, signing off on a five-star season with two rounds to spare.

Is anyone capable of unseating the Northern Irish legend? Congratulate Jonathan Rea via social media with the hashtag #Rea5stars and celebrate the best moments of his brilliant title win with WorldSBK VideoPass.