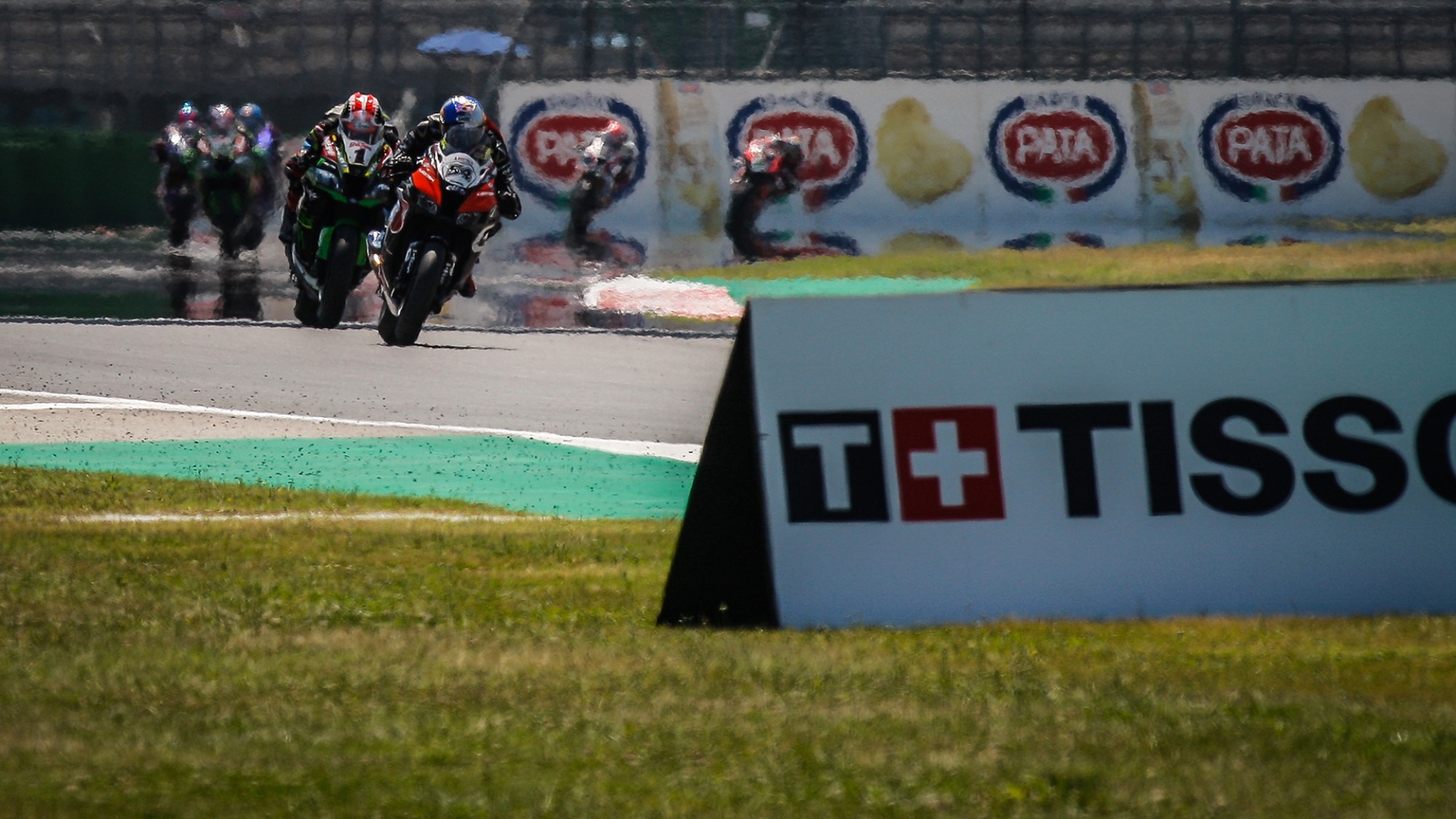 From jubilation and triumph to despondency and drama: the Misano World Circuit “Marco Simoncelli” will be remembered as a thrilling round for WorldSBK!

After Alvaro Bautista’s (ARUBA.IT Racing – Ducati) blunder back at Jerez, he came to Misano with a points lead that had been cut rather dramatically. With more inclement weather on the way, there were plenty of talking points from day one of racing. And just when we thought we’d seen it all, Sunday served up a classic head-to-head last lap duel. Thanks, Misano.

It was a phenomenal Race 1 at Misano as the heavens opened on the Italian venue. Causing an hour delay and one aborted start, it was high drama as the bike reassembled on the grid for the opening WorldSBK race of the weekend on Saturday afternoon. Following a strong start, Alex Lowes (Pata Yamaha WorldSBK Team) took the lead at the mid-way point of the race ahead of Jonathan Rea (Kawasaki Racing Team WorldSBK).

Setting a frighteningly quick pace, Lowes paid the ultimate price as he crashed at Turn 11 from the lead of the race. Jonathan Rea took a brilliant victory, ahead of Tom Sykes (BMW Motorrad WorldSBK Team) who achieved his first podium of the year. Championship leader Alvaro Bautista (ARUBA.IT Racing – Ducati) was third, giving away nine points to Rea. The wet race didn’t feature Michael van der Mark (Pata Yamaha WorldSBK Team), who suffered a violent highside after going top of FP2 on Friday. The Dutchman was declared absent from the remainder of the meeting, just two weeks after he won at Jerez.

After the highs of Race 1 at Misano, it was a turn for the worst for Jonathan Rea in the Tissot Superpole Race, as a strange accident in the last few laps saw the Ulsterman on the floor at Turn 10, having been running in a secure second place. Tucking the front as he went to make an apex, the bike flipped over him and left the four-time WorldSBK unceremoniously upside down in the Italian heat. However, showing his determination, Rea remounted and managed to finish fifth, but handed Alvaro Bautista more points than the Spaniard needed. Finishing fifth also meant that Rea had work to do in Race 2, as he went from the middle of row two.

After a Tissot Superpole Race win, Alvaro Bautista started from pole position for Race 2 and soon enough, he breezed into the lead before looking to try and break away from the chasing pack. With one lap complete, nobody was able to show the 34-year-old rookie a wheel, as he looked to be back to his dominant self and on course for a 15th win of the season. However, at Turn 4 on Lap 2, he crashed again and cited that a full fuel tank contributed to a strange feeling with the Ducati Panigale V4 R. Bautista recovered to 14th but it would prove to be a very costly mistake.

As Race 2 continued on without the then-championship leader, Toprak Razgatlioglu (Turkish Puccetti Racing) barged his way through the order and, for the first time in WorldSBK history, a Turkish rider had the lead of a WorldSBK race. But reigning champion Jonathan Rea wasn’t done yet and with four laps left to go, he got ahead of the Turkish rider at Turn 1. However, despite him trying to break away, Razgatlioglu would not be done-down and stayed with Rea, making for one incredible final lap. An initial attempt to pass Rea at Turn 4 was closed down but at Turn 8, Razgatlioglu made his move to the roar of the crowd. Rea fought back on the exit and held the lead to the finish line, with a spectacular end to a special, season-defining race.

Watch more thrilling action in 2019 with the WorldSBK VideoPass!