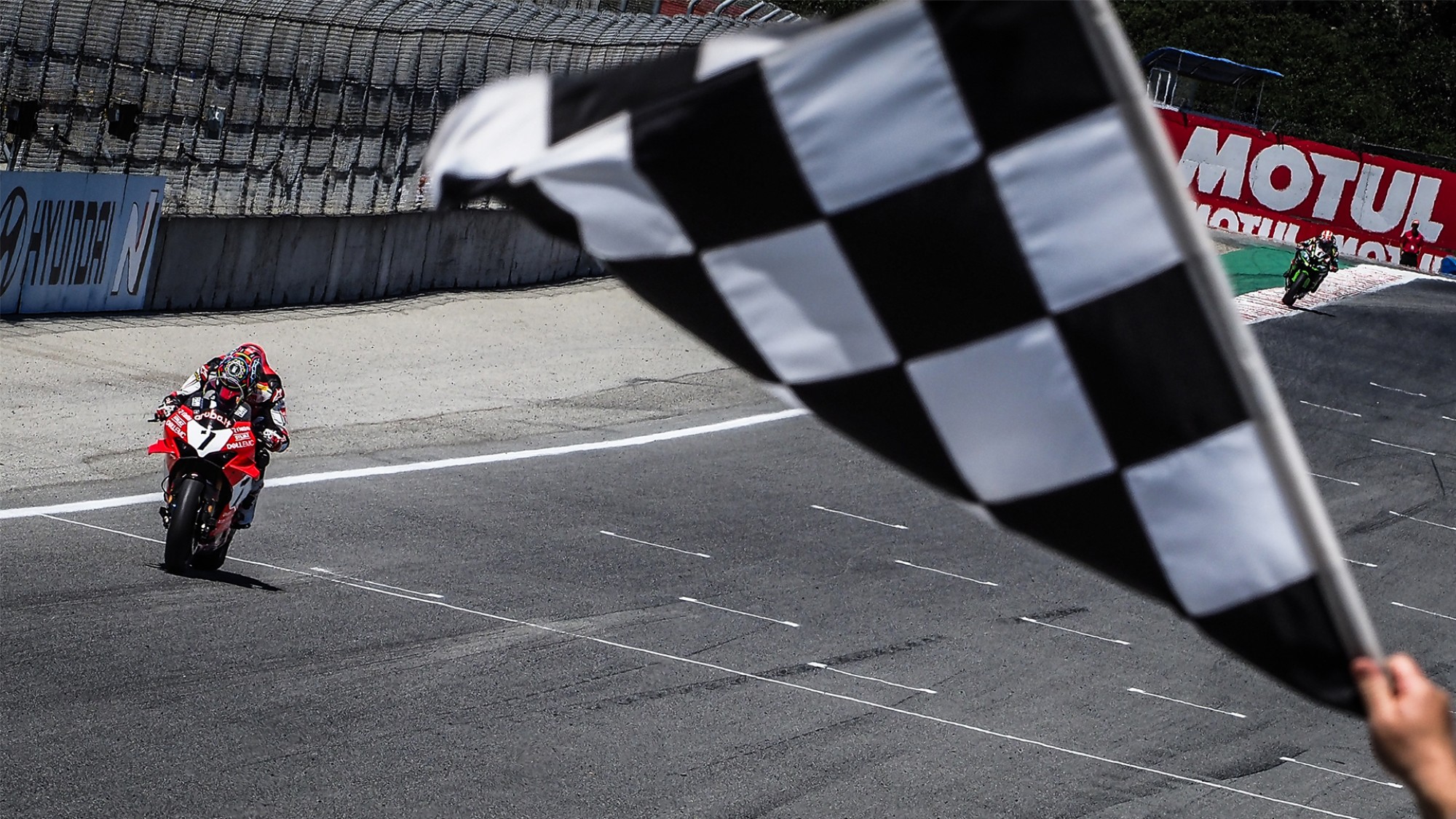 Memories made at the Laguna Seca venue make for the perfect end to the Summer break, with battles all the way through the field!

It has been nearly 16 months since Chaz Davies (ARUBA.IT Racing – Ducati) took his last win, but the determined Welshman put in an inspired ride to return to the top step of the podium in Race 2 at Laguna Seca. Davies’ 2019 season had been difficult and with a few podiums coming, he’d not looked as strong as his formidable self in previous seasons. However, a race win was a timely reminder that Davies should never be discounted and, in his words, “you do not forget – but people do.” The 32-year-old British rider will now look to maintain this form into the next portion of the season, on tracks he has enjoyed plenty of success on. Whilst the WorldSBK title may be done for another year, he could still play a pivotal role in the eventual outcome.

Having completed his first WorldSBK hat-trick at home at Donington Park, Jonathan Rea’s (Kawasaki Racing Team WorldSBK) relentlessness and determination boarded his plane to the United States. The Ulsterman breezed to two victories at Laguna Seca, with Race 1 and the Tissot Superpole Race going his way in dominant fashion. To add on to his success, Rea’s lead at the top of the championship tree is now at 81, the fruit of a remarkable 142-point swing in just ten races – the highest ever in the WorldSBK championship’s illustrious and decorated history. If his rivals stand any chance, they must shut down Rea at every possible. He’s been ruthless with this advantage before and 2019 is not going to be a year of exception.

If Alvaro Bautista (ARUBA.IT Racing – Ducati) was a duck, he’d drown; such is the luck of the Spaniard in recent rounds. His championship lead was 61 points to the good and now, he is 81 points in arears. It is the biggest swing of points in the history of motorcycle racing World Championships. At Laguna Seca, Bautista failed to notch up a single point. A Race 1 front-end crash at Turn 5 sent the 34-year-old into the gravel, whilst he was taken out by Toprak Razgatlioglu (Turkish Puccetti Racing) at Turn 2 on the opening lap of the Tissot Superpole Race. This resulted in a shoulder injury and, subsequently, the early retirement from Race 2 due to pain. We’ve seen him build a 61-point lead over Rea before, but can he do it again and – this time – find 20 more?

Each round has shown different riders to come good in 2019: Eugene Laverty (Team Goeleven) was full of promise and potential at MotorLand Aragon, Markus Reiterberger (BMW Motorrad WorldSBK) shone at Assen, whilst at Jerez, it was all about Toprak Razgatlioglu, Michael Ruben Rinaldi (BARNI Racing Team) and Sandro Cortese (GRT Yamaha WorldSBK). At Laguna Seca, Jordi Torres (Team Pedercini Racing) was the rider who enjoyed time at the front – where some would argue he belongs. The ‘Spanish Elvis’ rode hard all weekend, for his top six of the year in Race 1, backing it up with two more eighth-places in the remaining encounters. Torres made a big step forward on his Kawasaki ZX-10RR and looks like a force to be reckoned with in the rest of the season.

In the Tissot Superpole Race at Laguna Seca, there were some big numbers achieved by British riders. Jonathan Rea’s victory meant that is was the 250th win for the United Kingdom, with the Union Jack flying high. But it was also flying high above second and third on the podium, with the 50th all-British podium in WorldSBK history. 16 years since the first one, the UK found form in the USA and made it a remarkable achievement at the iconic WeatherTech Raceway Laguna Seca circuit. One nation’s dominance in WorldSBK has certainly made a mark on the championship, with other countries and riders now eager to go in pursuit and reach the level of British riders.

Watch more thrilling WorldSBK action in 2019 with the WorldSBK VideoPass!