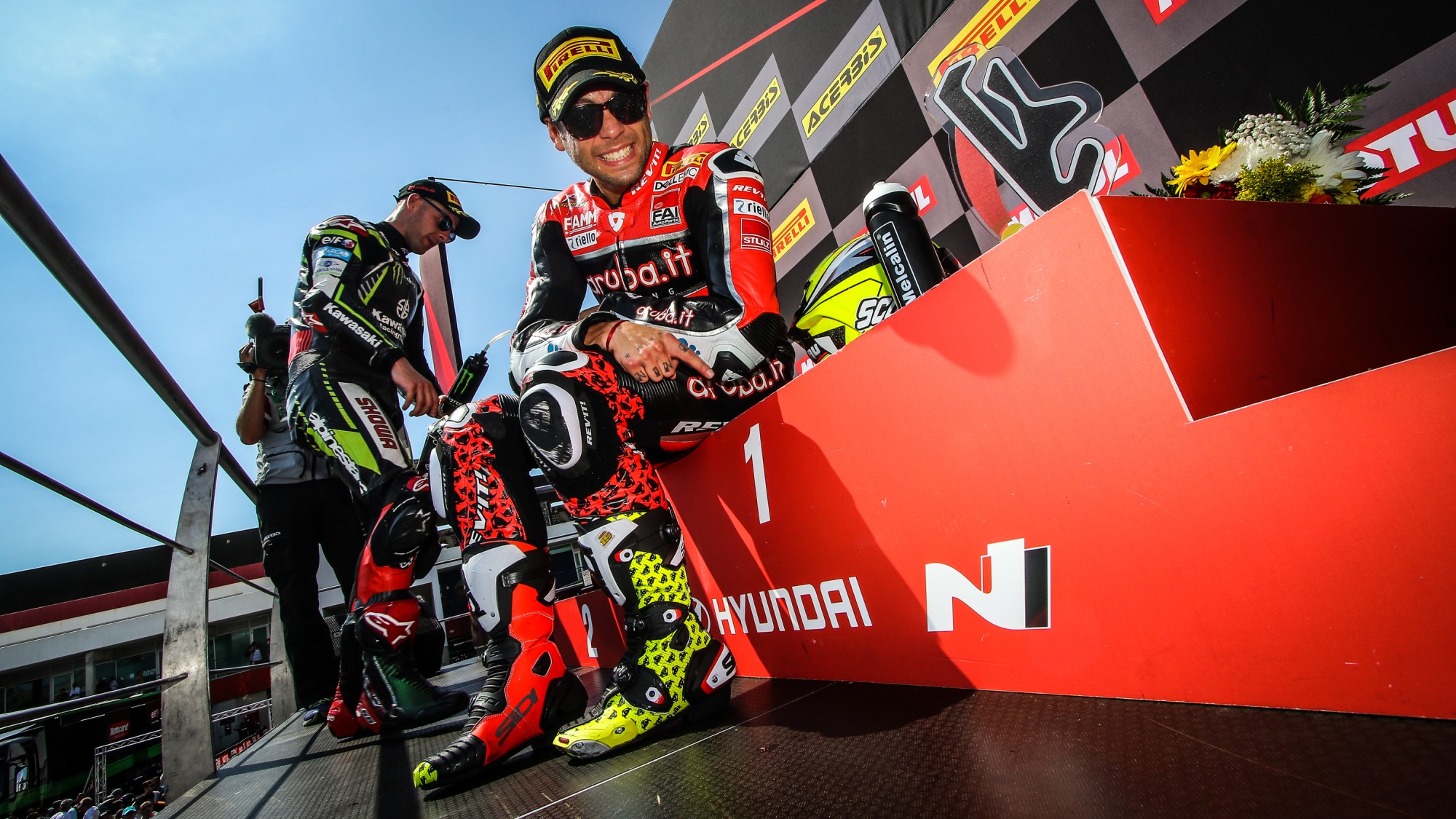 Relive five key moments from the first WorldSBK round for 2019 after the Summer Break!

The 2019 MOTUL FIM Superbike World Championship headed into a long Summer Break after the GEICO U.S. Round and returned into action in September with the ACERBIS Portuguese Round first on the calendar after the break. With the race venue having hosted the two-day of Official WorldSBK Test a few weeks before, riders were eager to finally restart their championship battles and provide the best of their performances after having recharged they batteries during the Summer. Autodromo Internacional do Algarve in Portimao welcomed them again ready to celebrate the first champions awards winners for 2019. Manuel Gonzalez (Kawasaki ParkinGO Team) had his first match point in Portugal, and lots more were expected at Portimao! Find out the best moments from a thrilling eleventh round of 2019 WorldSBK season!

Davies and Bautista clash at Turn 1 in Race 1!

The first round after the Summer break at Autodromo Internacional do Algarve in Portimao started literally with a bang for the Aruba.IT Racing – Ducati team! With Bautista showing promise on a race track he had never raced before and Chaz Davies back into his best shape after his first win for 2019 at Laguna Seca, both riders returned on the tarmac eager to add more trophies into their respective cabinets. Race 1 got underway on Saturday with both riders starting their race from the back of the grid. Bautista qualified sixth in the Tissot Superpole session, while Davies had to start only twelfth. When the lights went out, the British rider had a strong start and at Turn 1 he was able to set himself into 4th position, but at the same time, it was drama for the Aruba.IT – Ducati Team. In taking the spot, Davies barged on his teammate Bautista forcing him down to 18th place!

Alvaro Bautista’s Race 1 comeback: from 18th on Lap 1 to 4th under the flag!

It was a weekend to forget for Alvaro Bautista in the United States. The Geico U.S. Round sent him into the Summer break with no added points to his championship position and even a painful shoulder. But the Spaniard returned strong on the tarmac at the ACERBIS Portuguese Round, a race track where he had only tested before. Bautista was eager to return on the higher step of the podium, but his intention seemed vanished after that an accident at Turn 1 with his teammate sent him straight out onto the gravel. The Spaniard rejoined the competition and didn’t lose his fighting spirit. Dropped down in 18th position, Bautista managed to recover quickly, and by the end of lap 15, he was already sitting in sixth position chasing Razgatlioglu (Turkish Puccetti Racing) and Haslam (Kawasaki Racing Team WorldSBK) for the battle for 4th. The Spaniard cleared Razgatlioglu easily and tried to pass Haslam too, but the Brit didn’t let him through, and it was a big battle between the two. With three laps to go, Bautista finally managed to overtake Haslam to finish into the top 4!

The first part of the 2019 season didn’t precisely match Davies’ expectations, but with the Geico U.S. Round, the British rider humour was lifted by his first victory of the year, and the ACERBIS Portuguese Round confirmed that finally, Davies was back! Qualified just 12th on the grid, the Ducati rider had a strong start, and despite a small accident at Turn 1 that saw him colliding with his teammate Bautista, he managed to keep the position. Soon it was a battle for the second spot of the podium between Davies and van der Mark. Unfortunately, when he finally managed to settle in second position, Jonathan Rea (Kawasaki Racing Team WorldSBK) had already put enough ground between himself and the rest of the pack, but for Davies the back-to-back podium was a right way to start his second part of his 2019 campaign.

Bautista’s back to winning ways

After stealing the headlines on Saturday with his incredible comeback, the spotlight returned on Alvaro Bautista on Sunday as the Ducati rider was finally able to climb on the higher step of the podium again! After having secured a spot on the front row of the grid with a second position in the Tissot Superpole Race, Bautista was back strong on the tarmac also for the final battle for the ACERBIS Portuguese Round.
After a great start it was reigning World Champion Jonathan Rea to take the lead, but this time Razgatlioglu and Bautista remained closed behind him. At Lap 6 Bautista took the front of the group with the Northern Irishman dropping back in third behind the Turkish rider. Rea continued to lap faster than Bautista, and after getting back into second position, he started to hunt down the Spaniard. The five-time World Champion got closer and closer to Bautista, but in the end, it was the Ducati rider to come home first under the chequered flag. It was the closest end of a WorldSBK race for 2019 with Bautista’s back to winning style just 0.111 s ahead of Rea! Will he be able to keep the championship alive till the final round in Qatar?

Krummenacher vs Caricasulo. Another chapter of the teammates’ battle

After a two-month break, the WorldSSP Championship returned into action at the ACERBIS Portuguese Round, and the battle for the championship raged on again with teammates Federico Caricasulo and Randy Krummenacher reopening their head-to-head title scrap. Both qualified on the front row of the grid the BARDAHL Evan Bros. WorldSSP team duo resumed from where they left off before the break. Caricasulo took the lead right from the start of the race, while Krummenacher dropped down into fifth position on the first lap. The Swiss rider couldn’t let his main rival for the title go away with the victory, and by the end of Lap 7, he was back on second position chasing Caricasulo close behind. The battle raged on again, but the drama was about to happen. On lap 13 the race was suspended when Krummenacher was finally in the lead, but as Caricasulo was first when the red flag was brought out, he resulted as the winner as per the FIM Superbike Championship Regulations. For Krummenacher it wasn’t time yet to celebrate the World Title, but having both their riders on the podium, the BARDAHL Evan Bros. WorldSSP Team secured the 2019 Teams’ World Title with still three races left on the WorldSSP calendar.

Relive the ACERBIS Portuguese Round and all the outstanding battles of the 2019 MOTUL FIM Superbike World Championship with the WorldSBK VideoPass.