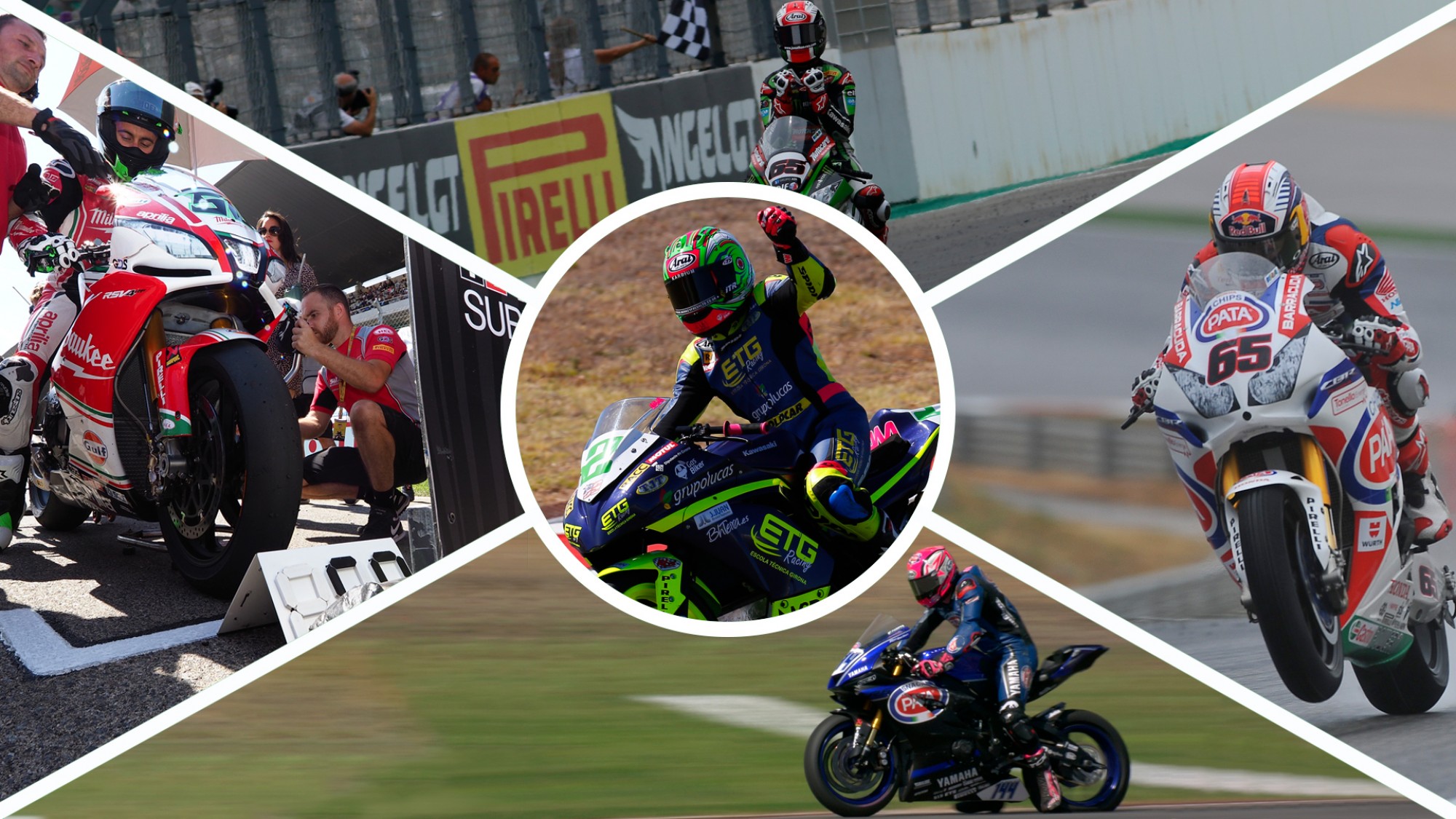 The thrilling Portimao circuit in Portugal is next up on the calendar for WorldSBK, where history and drama are always nearby!

The Algarve International Circuit made its first appearance on the MOTUL FIM Superbike World Championship back in 2008 and since then, has provided the WorldSBK championship with plenty of memories, from agonising heartache, feisty duels, inclement weather, history-making winners and goodbyes. Steeped in history for such a young circuit, Portimao beckons again this weekend, so what more could happen? Cast your mind back to these sensational Portimao moments!

One last Honda victory for Rea

2014 was a year to remember in Portugal for numerous reasons. The drama of Race 2 was just rising with each lap, as Jonathan Rea on his Pata Ten Kate Honda took the lead and began to edge clear in the early stages. Taking advantage of the wet conditions, the Northern Irishman romped off into the lead, but it wasn’t over, as the Aprilias of Marco Melandri and Sylvain Guintoli began to close down the Honda rider.

Drama was in the offing and despite being 1.5s a lap quicker than race leader Rea, disaster struck the Aprilia pair. With five laps left to go and both Melandri and Guintoli primed to make their move on Rea, Guintoli lurched up the inside at Turn 5, tucked the front and skittled Melandri. Both Aprilias were on the floor after looking certain for a one-two finish. Jonathan Rea took his final win for Honda, but things could’ve been very different…

Having come into the round with a 101-point advantage over his rivals, Jonathan Rea was eager for a return to winning ways in Portugal. However, the rain had other ideas and whilst he and teammate Tom Sykes duelled at the front with six laps to go, unpredicted rain began to fall. Everyone came into the pit lane, except for Tom Sykes, who stayed out. It would prove to be a battle royal at the front, as Sykes pitted a lap later and went head-to-head in the rain. Crashes down field, heavy winds and a titanic battle at the front, it would eventually be Rea who came out on top, as Sykes faded in the closing stages. A performance to remember in Portimao.

History made in motorcycle racing…

The WorldSSP300 class was in its inaugural season back in 2017, and Portimao’s return to the calendar witnessed one of the most historic achievements in the entire motorcycle racing world. Ana Carrasco came out on top of the WorldSSP300 duel, becoming the first woman to win a solo FIM World Championship race. This achievement was just the start of the Spaniard’s success in the new class, with more wins following in 2018 before she clinched the WorldSSP300 championship. What will be in store for 2019?

The 2018 World Supersport race at Portimao will go down in history as one of the most dramatic races seen in the class, with action and drama right from the green lights. Leading from row two, Jules Cluzel’s bright start was ended at Turn 5 with 17 laps to go, when championship rival Sandro Cortese wiped out the Frenchman.

However, it wasn’t all over and despite a huge lead, Lucas Mahias wasn’t out of trouble yet. The Frenchman suffered a rear tyre puncture at the start of the final lap, leaving him out of the race and for teammate Federico Caricasulo to take the win. But it wasn’t that simple, as a red flag came out, meaning that despite Caricasulo leading, if Mahias could get back to the pits with his bike within five minutes, he would win.

Mahias rode the bike back knowing that he had a chance, but would he make it in time? Mahias fell from his machine with just a quarter of the lap left but still, he refused to give in. He crashed again on the run to the final corner and then took a shorter service road but made it back to pit lane to a massive roar from the crowd. But had he got back soon enough? Yes, he had! After much debate, Lucas Mahias was the winner after all of his extra effort. Simply astonishing.

It was a welcome return to top-spot for Eugene Laverty, as the Irishman blasted to pole position at Portimao in 2018; his first in World Superbike since re-joining the paddock in 2017. However, the high of Saturday’s pole position would be extremely short-lived. After a poor start, things went from bad to worse for the Irishman, as Xavi Fores’ out of control BARNI Racing Ducati slammed into the rear-end of his Aprilia, taking them both out at Turn 3. It would be the end of the race for both and Laverty’s pole position meant nothing. It is his last to-date…

Watch the Acerbis Portuguese Round with the WorldSBK VideoPass, now at 72% off!