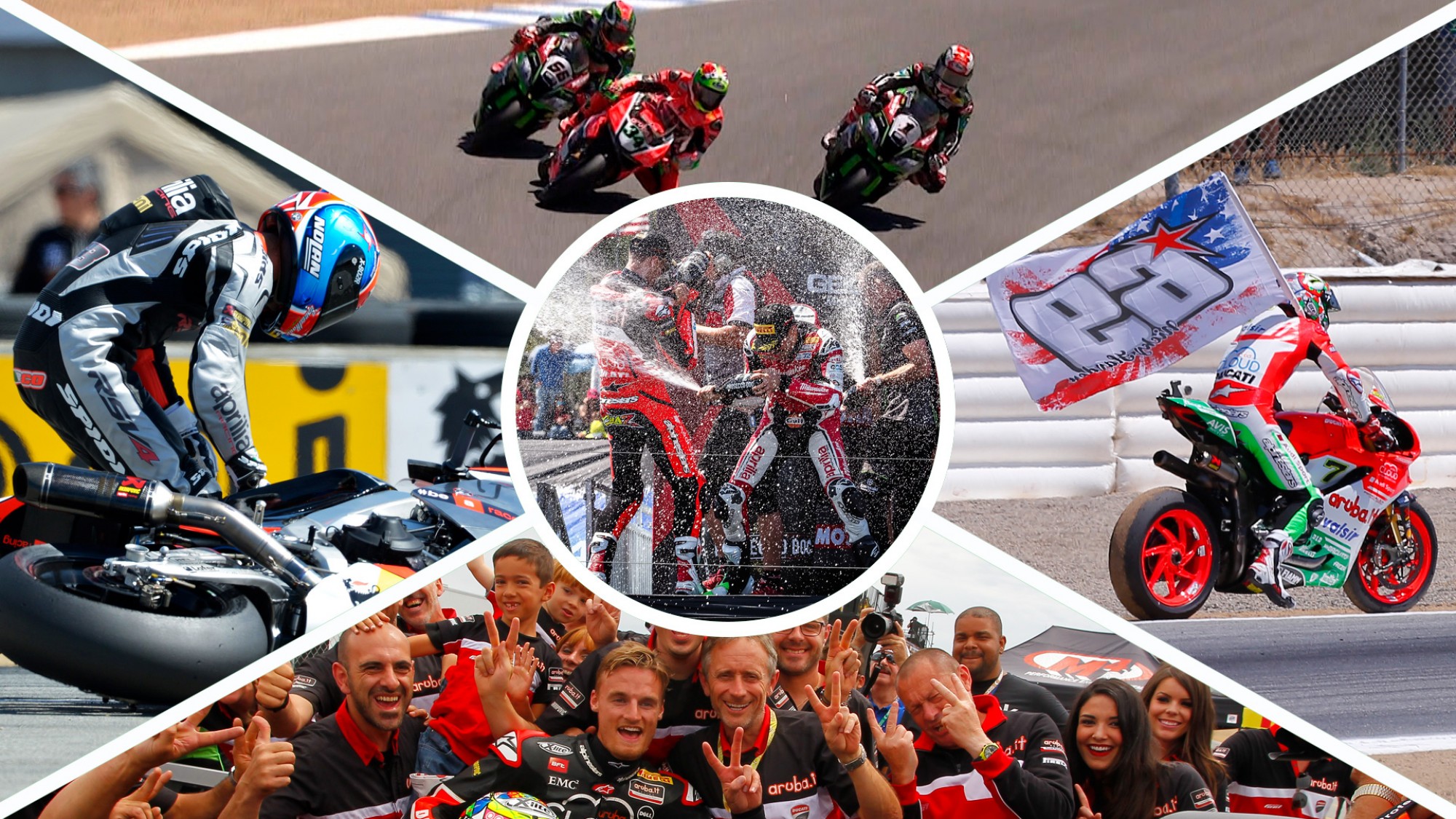 California never fails to deliver, but what’s your favourite US race?

The MOTUL FIM Superbike World Championship makes its way back to the WeatherTech Raceway Laguna Seca, home to 32 full WorldSBK races and more than its share of thrills and spills. Kawasaki and Ducati shared the spoils in the inaugural Laguna Seca event back in 1995 and that has been the dynamic in recent years too. Not that has spared us from drama and exciting racing. Far from it in fact, and below is the proof. VideoPass hosts all the races from the past five full seasons of WorldSBK, so here are the key moments from the US to get you started.

Marco Melandri’s return to Aprilia proved to be trickier than he might have originally envisioned. After eight rounds he was fifth in the championship standings, just two wins at Sepang to his name, and over 100 points behind then leader Tom Sykes. If Round 1 was the optimal time to mount a championship challenge, Laguna Seca was the eleventh hour – and in fairness, Melandri was far from waving the white flag.

Race 1 went the Italian’s way, and then, in Race 2, after two red flags the 250cc World Champion was back in control, pushing ahead in the second restart. Alas, the dream of an improbable title fight lasted all of two laps, as TV viewers saw Melandri slip out at the final turn from Sykes’ onboard camera. Amazingly he took 95 of the next 100 points in play – team orders denying him the other 5 – but it was a matter of too little, too late.

While the Panigale 1199 R failed to bring the WorldSBK crown back to the factory in Bologna, it did leave many magnificent memories along the way. From the bike’s first podium in 2013 under private hands to a first win in 2015, before this crowning achievement: Chaz Davies’ fantastic Californian double, the first of its kind for the new red machine. Seven more would follow from the Welshman (plus one by Melandri), but this kickstarted all, as Davies left the two factory Kawasakis to scramble amongst themselves for second place.

Attempting a pass at the Corkscrew: bravery or foolishness? Probably a bit of both, with boatloads of skill mixed in if you want to make it stick. It may not even be all that surprising that Jonathan Rea, one of the keenest passers in WorldSBK history, would try it at one point or another. But no one in their right mind would dream to do it over two riders at the same time… Would they?

Think again. Or better yet, just see this masterful, quite bonkers manoeuvre for yourself. Yes, Sykes powered back through on the exit. And yes, a mistake at T7 and posterior mechanical failure meant that he left the race empty-handed. But still… Where on earth did that move come from?

Chaz Davies’ accident in the final lap of the Misano Race 1 was one of those that could make one’s blood run cold. With nowhere to go for Rea, the fallen Davies took the full brunt of the Kawasaki over his back, only adrenaline allowing him to momentarily make it to his feet. But this was a serious injury, and there were serious questions over whether the Ducati rider could – or should – even make it to the US.

Davies did much more than “just turn up”. Starting from third, the Welshman assumed the Race 1 lead half way through, pulling away shortly after to his fourth win of the year. From a hospital bed with a fractured L3 vertebrae to sipping Prosecco in California 20 days later. Impossible? Not if you’re “Ironman” Chaz Davies.

It was a good weekend for fans on both sides of the Irish border in 2018. While Jonathan Rea pulverised the opposition in both races to score his first US double, Eugene Laverty made an emotional return to the rostrum, his first in four years. With the reverse grid format, started Race 2 from pole, and one holeshot later took control of the race lead. Rea took little time to catch up; Davies followed a few laps later. Few would have blamed the Aprilia rider if the pressure had gotten to him as the pair of Pata Yamahas grew closer… But this was his moment to shine. Third place for the ecstatic Irishman, who would back it up with another two weeks later.

What surprises await us in this year’s Geico US Round? Find out as the action gets underway on WorldSBK VideoPass!