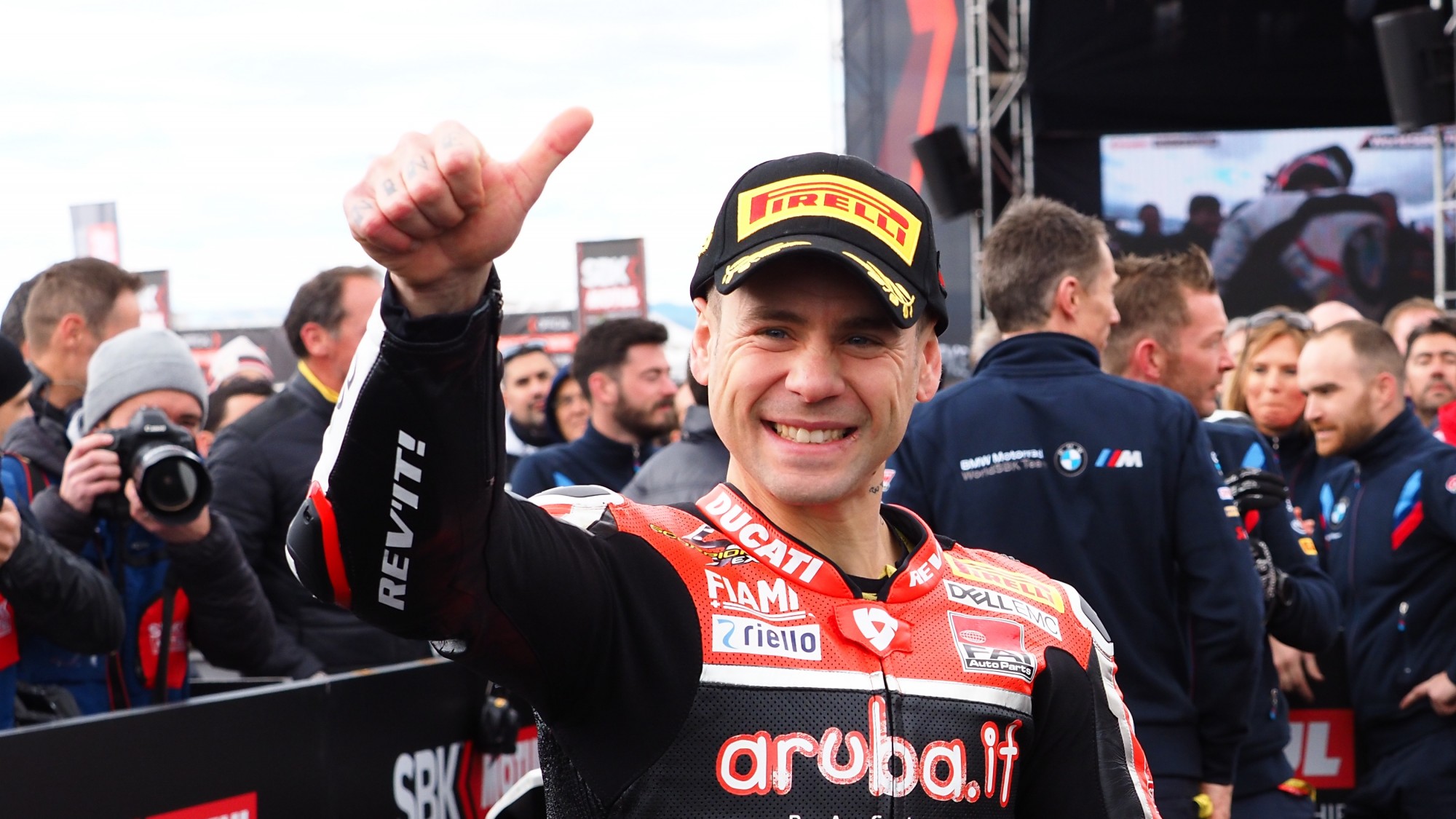 An action-packed opening WorldSBK encounter saw Alvaro Bautista take a seventh win of the 2019 MOTUL FIM Superbike World Championship season. It was a thrilling battle for second position though, as a seven-bike train soon began to frantically swap places, resulting in a thrilling final few laps.

Bautista got a dream start, blasting clear into the lead by Turn 1. However, there was drama behind as Jonathan Rea (Kawasaki Racing Team WorldSBK) and Markus Reiterberger (BMW Motorrad WorldSBK Team) collided on the line, leaving the German rider on the floor in the middle of the pack. He was able to get up, but his race was certainly over.

Tom Sykes (BMW Motorrad WorldSBK Team) was able to give some positivity to the German manufacturer, as he got into second position, ahead of Alex Lowes (Pata Yamaha WorldSBK Team). There was more carnage on the opening lap, as Leandro ‘Tati’ Mercado (Orelac Racing Verdnatura) and Alessandro Delbianco (Althea Mie Racing Team) crashed at Turn 12.

Chaz Davies (ARUBA.IT Racing – Ducati) was moving up the order very quickly, into fourth by Lap 2, racing up from eighth on the grid. Jonathan Rea had also made a great start, up to fifth position, whilst the rider who had suffered the most in the opening laps was German, Sandro Cortese (GRT Yamaha WorldSBK), who was now down to seventh as Michael van der Mark (Pata Yamaha WorldSBK Team) moved through on his Yamaha compatriot.

As the race progressed, a mistake from Alex Lowes at the final corner allowed Jonathan Rea and Tom Sykes to come through, whilst Chaz Davies also got in on the action. Four riders, representing four manufacturers, side-by-side down the straight for second position. Meanwhile, way out in the lead, Bautista achieved a new lap record, with 1’49.755 cementing his position as the rider to beat in WorldSBK.

Tom Sykes soon dropped back behind the main protagonists but Eugene Laverty (Team Goeleven) was right in the mix, picking up places and soon, was amongst the leading group. The Irishman made it into fifth position in the final third of the race, before also making a bold move with three laps to go on Lowes at Turn 12. The Irishman was now fourth and looking good for a podium.

Jonathan Rea was looking good for second place and continuously hounded Chaz Davies through Turns 3, 4 and 5. Rea led the battle going on to the final lap, with Davies all over the rear-end of the reigning four-time champion. Eugene Laverty was able to make his way to the back of the duo, looking hard for a way ahead of Davies. Into Turn 14, Davies was lining Rea up for a move down the back straight before Eugene Laverty clipped him and crashed out. Davies stayed aboard but the damage had been done.

Completing the race without any such drama, Alvaro Bautista took a seventh win, whilst Jonathan Rea took a seventh second position and Chaz Davies in third place – his first podium of the 2019 season. Laverty’s crash promoted Alex Lowes to fourth and a resurgent Tom Sykes, who picked off Cortese and van der Mark in the closing laps. With Sykes fifth with the Dutch and German stars behind, eighth place was taken by Toprak Razgatlioglu (Turkish Puccetti Racing), ahead of a disappointing Leon Haslam (Kawasaki Racing Team WorldSBK) in ninth and top Kawasaki after Tissot Superpole, Jordi Torres (Team Pedercini Racing); the 31-year-old Spaniard taking his first back-to-back top tens of the season.

Bautista’s win makes it 348 for Ducati, meaning an iconic 350 at Aragon this weekend can still happen. It is his seventh consecutive win and Spain’s first at a Spanish circuit since Ruben Xaus in Race 1, at Valencia in 2007 – also riding a Ducati. Chaz Davies’ podium means it is the first time two Ducati riders have been on the same podium in almost an entire year: MotorLand Aragon Race 2.

Find out if Bautista will make it eight straight wins on Sunday with the WorldSBK VideoPass!