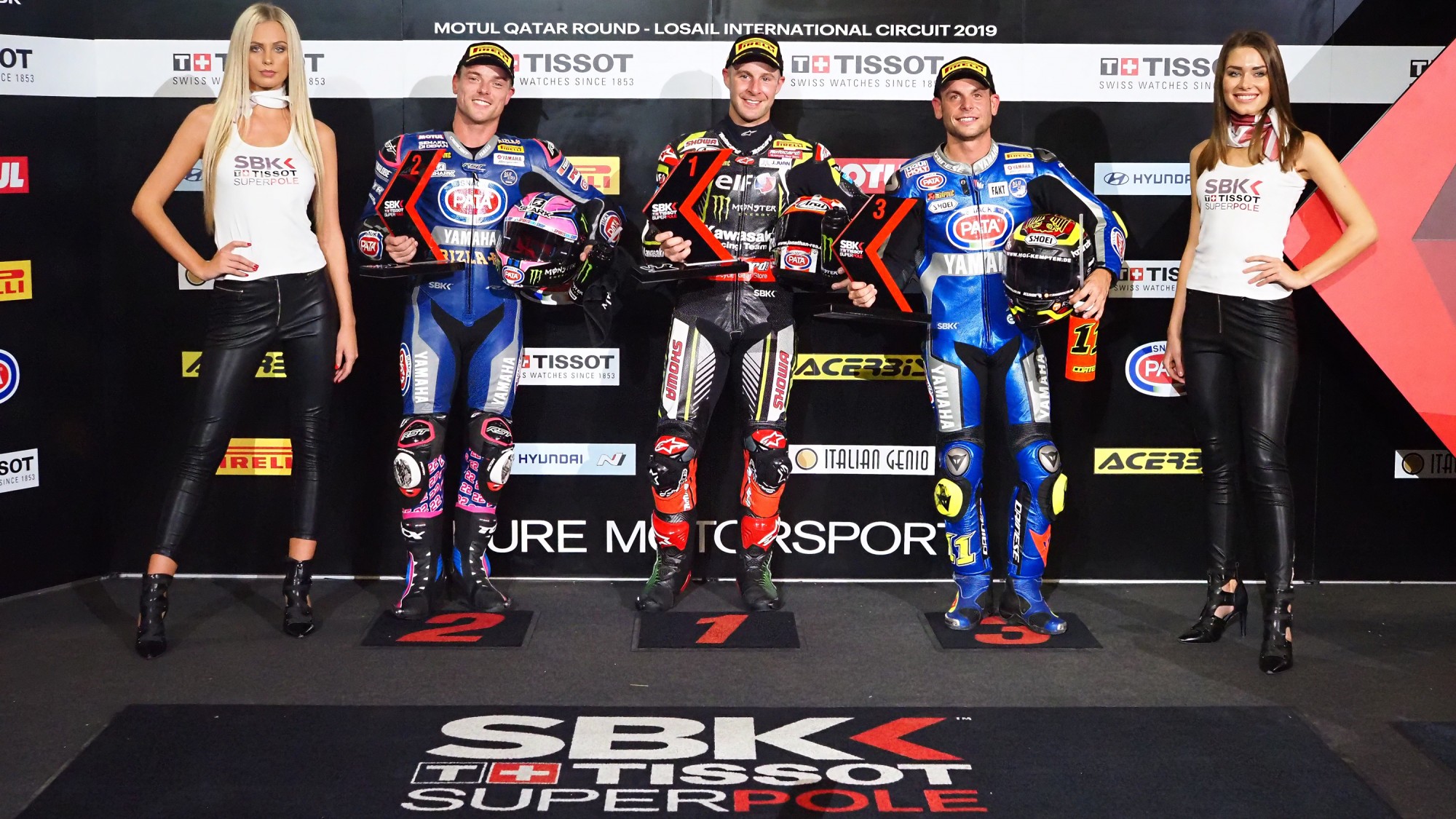 The final Tissot Superpole session of the 2019 MOTUL FIM Superbike World Championship season kicked-off in Qatar at the Losail International Circuit. The 25-minute session determined the grid for Race 1 later on and for the Tissot Superpole Race on Saturday. Romping to pole position, a magnificent lap from Jonathan Rea (Kawasaki Racing Team WorldSBK) saw the Ulsterman rack up a 23rd career pole.

@jonathanrea is already pushing hard to improve his time!

With the opening laps piling in, Alex Lowes (Pata Yamaha WorldSBK Team) was the man to beat after the first three laps of the session. The Yamahas were looking strong, with Sandro Cortese (GRT Yamaha WorldSBK) up in third with 16 minutes to go, whilst Michael van der Mark (Pata Yamaha WorldSBK Team) was initially fifth, with Loris Baz (Ten Kate Racing – Yamaha) in sixth. The only non-Yamaha riders in the top six were Jonathan Rea in second and Toprak Razgatlioglu (Turkish Puccetti Racing) in fourth.

As the clock ticked down to enter the final 15 minutes of the session, there were plenty of movers and shakers. Cortese jumped ahead of Jonathan Rea into second, whilst fastest on Thursday Chaz Davies (ARUBA.IT Racing – Ducati) moved into contention up to tenth. Markus Reiterberger (BMW Motorrad WorldSBK Team) was continuing his strong pace and leapt up to sixth place.

Strong start for @alexlowes22! @PataYamahaWSBK sits first after the first with 1'57.217

With 10 minutes to go, Tom Sykes (BMW Motorrad WorldSBK Team), Leon Haslam (Kawasaki Racing Team WorldSBK), Marco Melandri (GRT Yamaha WorldSBK) and Leon Camier (Moriwaki Althea Honda Team) were outside the top ten. However, improvements were coming all the time and the Q tyres began to come into play, having an interesting effect on the grid.

Jonathan Rea was the first to fit the Q tyre and set a scintillating 1’56.246, 0.9s quicker than Alex Lowes. But everyone else had the chance to respond to the five-time WorldSBK Champion. Alex Lowes confirmed his second-place pace and Sandro Cortese secured his third place on the grid, making for a third front row in 2019 and becoming the first German rider to start from the front row at Losail since Max Neukirchner in 2008.

Elevating himself up the order from outside the top ten, Tom Sykes was back on the second row in fourth, just fractionally ahead of his former teammate, Loris Baz. Baz in fifth place set a good lap time in the closing stages which initially put him on the front row before other riders improved. Leon Haslam completed the top six, also improving from outside the top ten to end up on the second row.

Amazing job for the rookie @Sandrissimo11 who improves his lap and sits second of the timesheets before the last flying laps! #QATWorldSBK pic.twitter.com/hVBGCtSIPY

The third row sees the first Ducati of Alvaro Bautista (ARUBA.IT Racing – Ducati), who had a relatively quiet session, finishing further down than he’d have liked at a circuit he knows well. Michael van der Mark (Pata Yamaha WorldSBK Team) slipped to eighth whilst Markus Reiterberger was back inside the top ten after Tissot Superpole for the first time since Portimao, in ninth. Toprak Razgatlioglu completed the top ten, 1.3s off Rea at the top and also the last of the riders in the battle for third overall in the Championship.

Watch the Motul Qatar Round and all of the incredible WorldSBK action with the WorldSBK VideoPass!