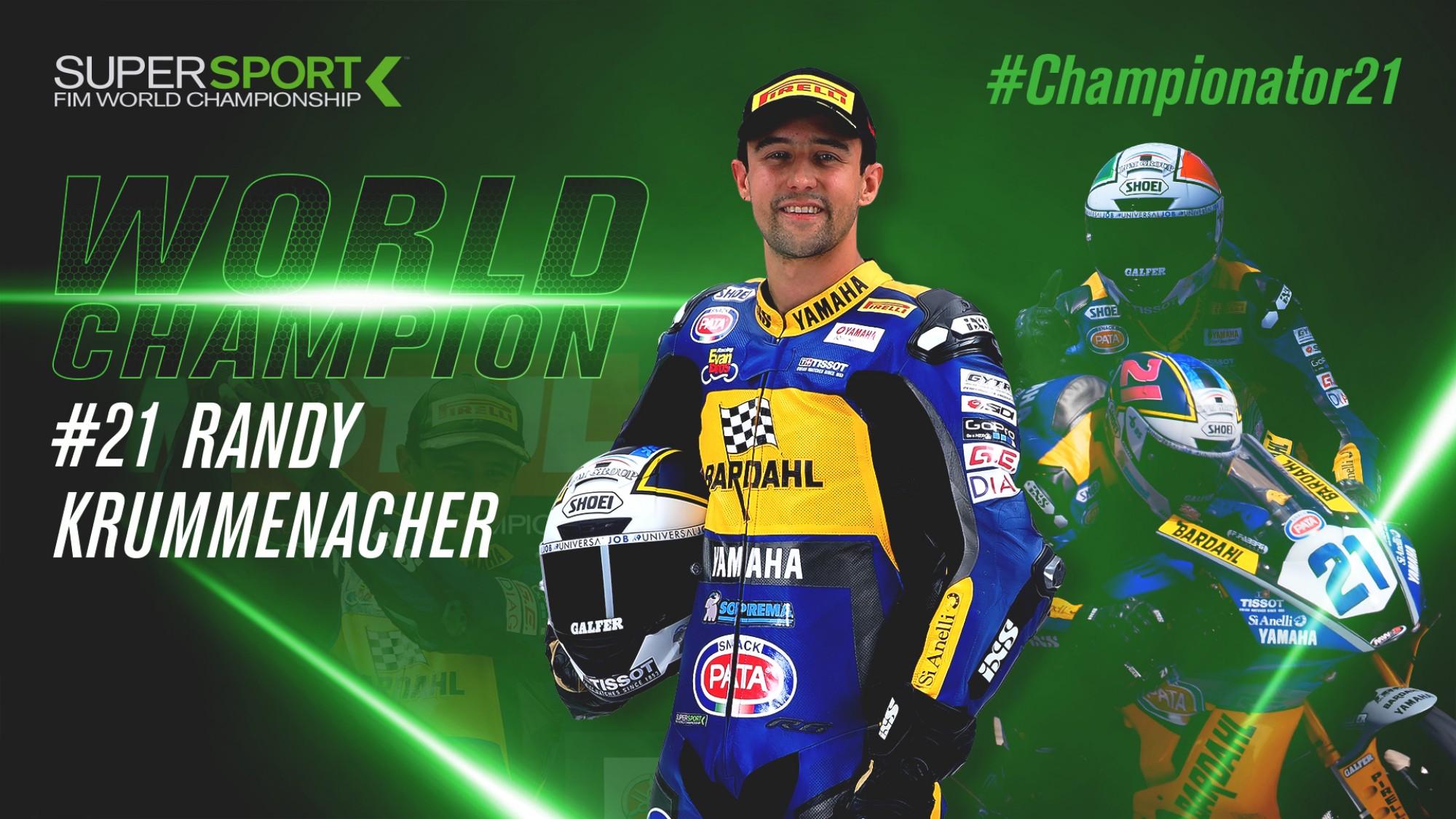 Randy Krummenacher (BARDAHL Evan Bros. WorldSSP Team) is the new king of the FIM Supersport World Championship, after holding on to his advantage over teammate Federico Caricasulo and Jules Cluzel (GMT94 YAMAHA) in the final race of the year.

The middleweight class thus crowns another German-speaking Champion one year after Sandro Cortese’s fantastic achievement as a rookie. Krummenacher is the first Swiss rider to become World Champion in the World Superbike paddock and only the fourth if adding MotoGP™ (joining Luigi Taveri and Thomas Luthi, 125cc Champions, and Stefan Dörflinger, 50cc and 80cc Champion).

2019 was the year that Krummenacher added consistency to his undeniable talent. After promising yet uneven spells in the 125cc World Championship and Moto2™, the man from Zurich landed in WorldSSP with a bang in 2016, winning his first race in the series. It would be his only win that year, but several more promising results gave him the chance to step up to WorldSBK in 2017 alongside Puccetti Racing.

Krummenacher was back in WorldSSP for 2018 and, in similar fashion to his rookie season, made another instant impact by winning the second race of the year. The BARDAHL Evan Bros. rider starred in an unbelievable comeback at Assen one month later, yet the pieces never quite fell into place for the rest of the year, having to settle for fourth in the standings.

Facing his third year in the class, Krummenacher remained with the BARDAHL outfit as they expanded to a two-rider lineup and the payoff was immediate. The Swiss rider dominated in Phillip Island as he did in his rookie season, leading every single lap, before adding a hard-fought second position in Thailand after battling through from eighth.

Yet again, Krummenacher headed into the European rounds as the WorldSSP championship leader. In previous years this was where his championship challenge would start to unravel – but not this time. A brave last-lap move over Raffaele De Rosa handed him a second victory in three races at MotorLand Aragon, with teammate Caricasulo behind in third after leading most of the event.

The tables were turned in Assen seven days later, when the Italian youngster caught Krummenacher off-guard in the last lap to take his first victory of the campaign by just 0.032 seconds, in what was the first true head-to-head battle between the pair in 2019. It would be far from the last.

Embittered by that late defeat at Assen, Krummenacher repaid the favour four weeks later at Imola by snatching his third victory of the year with just five turns remaining, increasing his championship lead to 22 points in the process.

Yet his teammate would not be one to give up so easily either, and in Jerez, once again we saw Caricasulo besting Krummenacher by the finest of margins to snatch back five points from his championship lead. The pair, clearly driven by each other’s success, not to mention the prospect of a first World Championship medal, put on a clinic in Misano two weeks after, rubbing shoulders right through the final corners. This time, once again, Krummenacher prevailed.

Donington Park broke the streak of BARDAHL one-two finishes with a Jules Cluzel victory (his second of the campaign), and for the first time in 2019 Krummenacher did not feature on the podium. Yet the Swiss star still managed to show his excellent form, climbing his way through the field from an unfortunate fourth row start to finish fourth and less than a second behind the eventual race-winner.

Still, Caricasulo was back on his trail and in Portimao, on the other side of the summer break, the Italian closed the gap to just 10 points thanks, in part, to a stroke of luck. The pair had returned to rubbing elbows throughout the race before a red flag forced an early conclusion. Final results were based on standings at the end of the last completed time-keeping point… Which was mere seconds after Caricasulo had overtaken Krummenacher for the race lead.

Momentum seemed to be slowly shifting towards the Italian rider and the first lap at Magny-Cours did little to dispute that thought, after a highside left Krummenacher down and out, his first DNF in over two years. Caricasulo cruised into the race lead at the same time and everything was in place for him to become the new championship leader.

And then the 23-year-old crashed. Twice. The crisis had been temporarily averted, Krummenacher was back in control and with a first match point set for Argentina. Here, the tension reached a boiling point with the teammates clashing inside the final laps and Krummenacher lamenting a lack of power. Neither man was on the podium and with Cluzel’s win this became a three-fight for the floodlit final round.

Yet Krummenacher remained with an 8-point advantage over Caricasulo and 22 over Cluzel. Not a single point more was needed: the Swiss reverted his late misfortune and powered through to a career-defining title win. Strength of attitude, a crisp-cool personality and overtakes for days: World Supersport has a Champion to be proud of.

The Krummenator is Champion! Congratulate King Krummi on social media with the #Championator21 hashtag and relive the best moments of his title-winning campaign thanks to WorldSBK VideoPass.