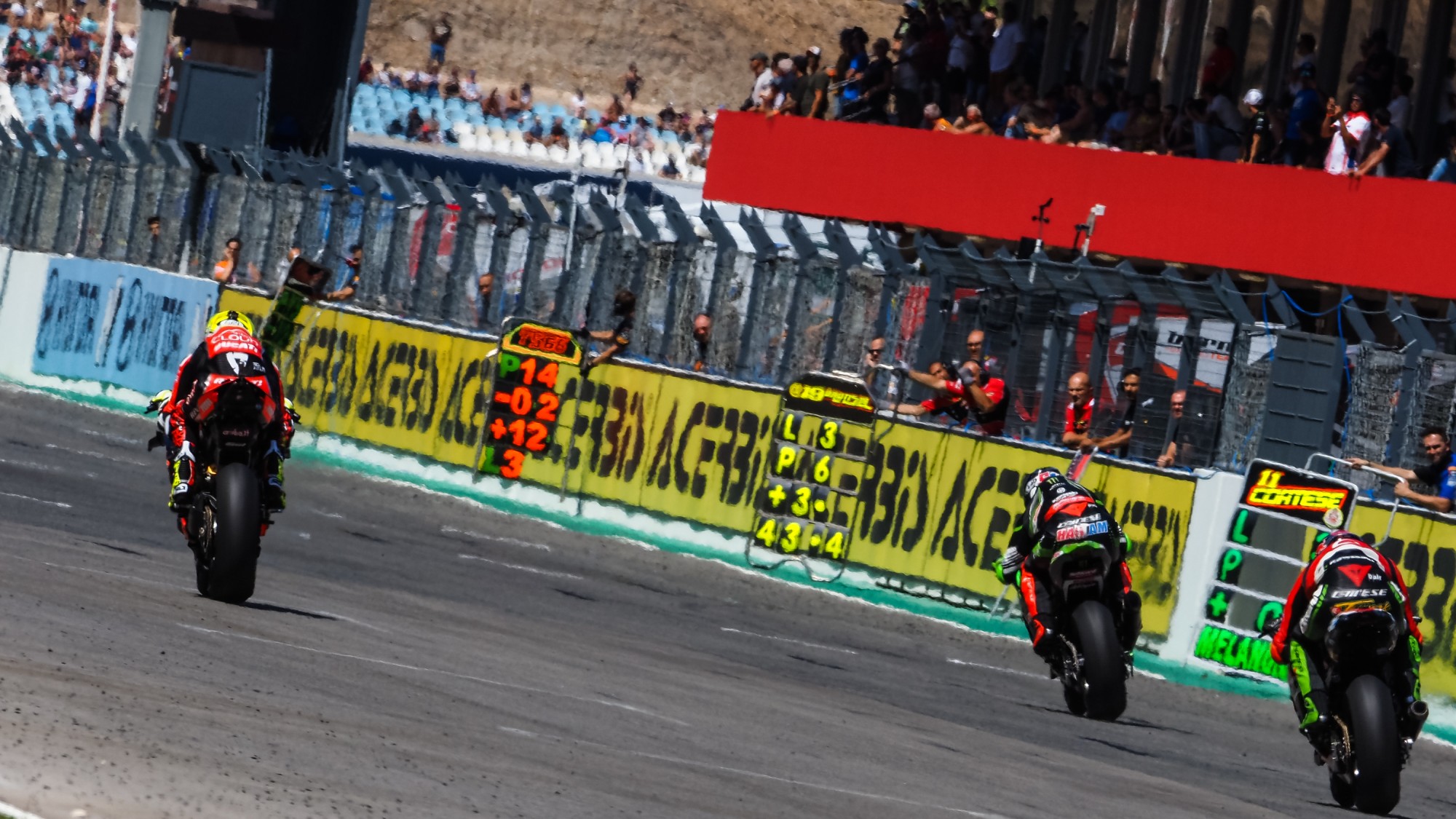 With many of the top six having to come from far down, there were plenty of fireworks in the opening WorldSBK encounter!

It was a race of comebacks in Race 1 at Portimao, Portugal, as WorldSBK returned to action after seven weeks off from racing. Beside the race winner, the podium consisted of riders who made up more than seven positions and there was also comeback rides all the way through the order, as well as some riders who lost out massively, with crashes or starting from higher up the grid than their race pace indicated. Add on to that Turn 1 collisions and riders being pushed back, there were some relentless charges back through the field.

Starting with Chaz Davies (ARUBA.IT Racing – Ducati), the Welshman took victory at Laguna Seca in Race 2 but found himself down in 12th after Tissot Superpole on Saturday morning. However, an aggressive start saw him push his own teammate Alvaro Bautista out of the way the first turn, whilst at the end of Lap 1, he was inside the top four, making up an incredible eight positions in the opening four-and-a-half kilometres of the race. Discarding Tom Sykes (BMW Motorrad WorldSBK Team) and fending off a challenge from Michael van der Mark (Pata Yamaha WorldSBK Team), Davies took second all the way from 12th in an inspired ride.

Dutchman Michael van der Mark (Pata Yamaha WorldSBK Team) similarly found himself needing to rampage through the field early on, starting from tenth on the grid. The 26-year-old, who has been on the last three podiums at Portimao, was determined to extend that streak and make it four and by the end of an eventful first lap, he was already into fifth. He kept his nose clean and followed Davies through the pack by first, passing Leon Haslam (Kawasaki Racing Team WorldSBK) and then Sykes, van der Mark momentarily took second from Davies at the final corner but would have to settle for third overall.

Having been known as a bit of a comeback king, Toprak Razgatliolgu (Turkish Puccetti Racing) once again gave himself work to do, this time from 13th on the grid, his worst starting position at the Portuguese venue. Carving his way through and making short work of the opposition, Razgatliolgu was in the battle for the podium until he faded in the middle of the race. Coming back to life as the battle for fourth intensified, the 22-year-old finished in sixth, making up seven positions on his way to his best finish at Portimao in World Superbike. Watch out for him in the shorter Tissot Superpole Race on Sunday morning.

It was an unexpected comeback for Alvaro Bautista (ARUBA.IT Racing – Ducati), who was forced off at Turn 1 on the opening lap by his teammate, Chaz Davies. Dropping down to as low as 18th, Bautista had to settle down before picking his way through the pack. Gifted a couple of places due to crashes for Loris Baz (Ten Kate Racing – Yamaha) and Tom Sykes (BMW Motorrad WorldSBK Team), Bautista was able to clamber up to fourth with two laps to spare. A great comeback but one he didn’t expect. With strong pace, he is a podium contender ahead of Sunday’s races.

Besides Bautista, all of the aforementioned riders will need to do the same again in the Tissot Superpole Race and with an even shorter amount of time to get the job done. Will they be able to bring the fight to Jonathan Rea (Kawasaki Racing Team WorldSBK) at the very front of the WorldSBK field?

Find out more from the Acerbis Portuguese Round with the WorldSBK VideoPass!