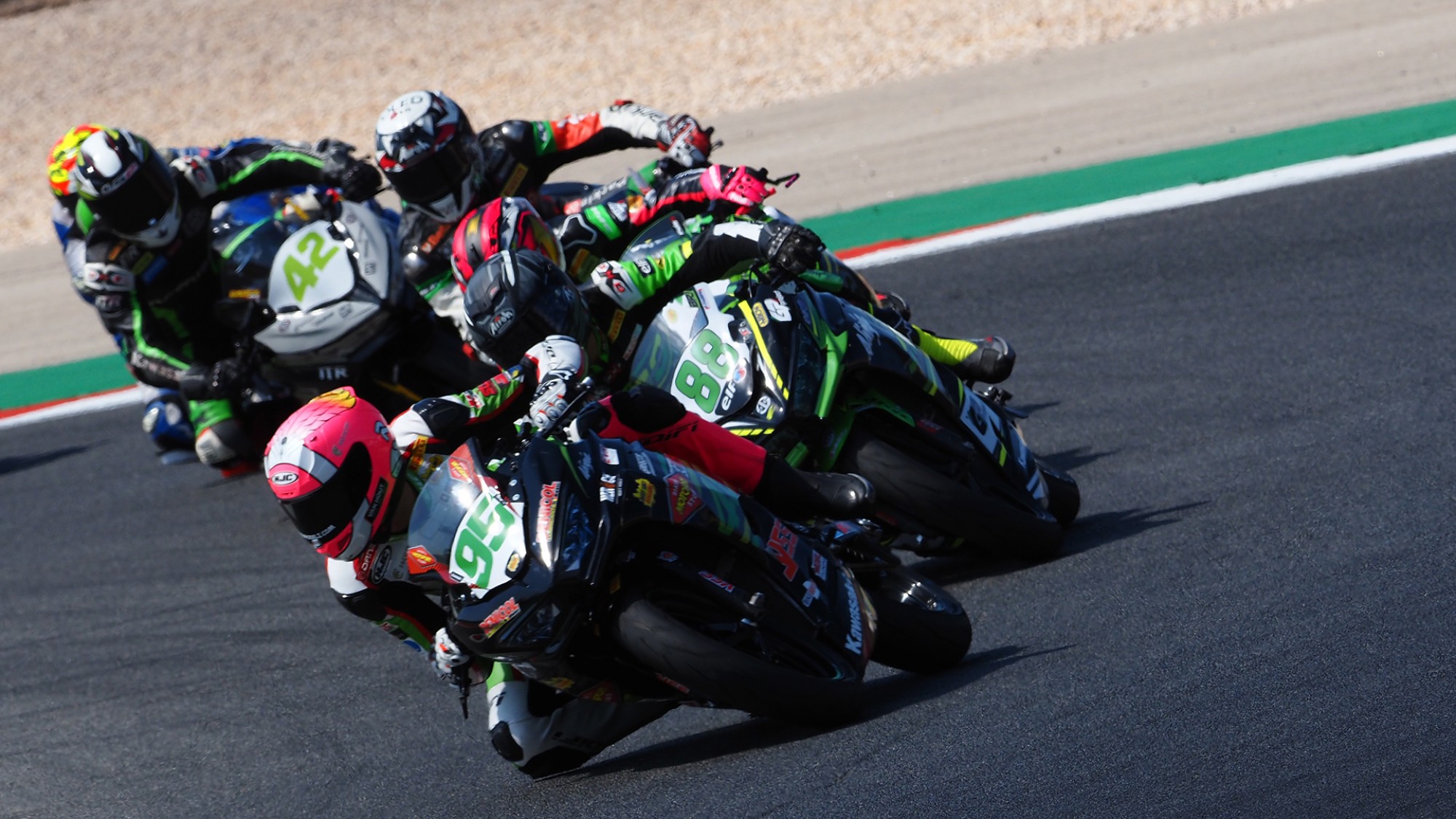 After six wins and remaining on the podium all season, Kawasaki have taken the WorldSSP300 manufacturers’ title with two rounds to spare

Kawasaki have clinched the manufacturers championship in the WorldSSP300 class for a second consecutive season, as the Japanese manufacturer’s prowess in the class has led to them building an unassailable lead over Yamaha and KTM. Six race wins and never once being off the podium, the manufacturer has comfortably wrapped the championship up with two rounds to spare.

Starting with their dominance in at the Motocard Aragon Round at the MotorLand Aragon circuit, where Manuel Gonzalez (Kawasaki ParkinGO Team) left it until the penultimate corner on the final lap to take his first ever WorldSSP300 victory. Fellow Kawasaki rider Scott Deroue (Kawasaki MOTOPORT) joined him on the podium, whilst Bruno Ieraci (Kawasaki GP Project) made it three Kawasakis inside the top ten.

Moving onto the Motul Dutch Round at the TT Circuit Assen, and it was a Kawasaki 1-2, with Gonzalez winning and home-hero Deroue pinching second place in a last lap, last chicane shoot-out. There were three other Kawasakis inside the top ten too, including the first points of the season for defending WorldSSP300 champion, Ana Carrasco (Kawasaki Provec WorldSSP300).

With the round at Imola cancelled due to weather, it was double-header at Circuito de Jerez – Angel Nieto, where Kawasaki proved to be the manufacturer to beat. Kawasaki locked-out the podium in both races, with Marc Garcia (DS Junior Team) heading home Deroue and Ana Carrasco in Race 1, whilst Manuel Gonzalez took a third win of the season in Race 2, ahead of Garcia and Carrasco. By this point, Kawasaki were starting to make their mark on the championship.

It was a Kawasaki 1-2 once more at the Pata Riviera di Rimini Round at the Misano World Circuit “Marco Simoncelli” but this time, it was the first win of the season for Ana Carrasco, ahead of championship rival Manuel Gonzalez. Two more Kawasakis inside the top ten made them a strong force, although they wouldn’t be able to wrap the title up just yet.

Heading to Donington Park and the Prosecco DOC UK Round, Kawasaki were looking like the team to beat. However, after not securing pole position, the race would see them drop points for the first time all year. A third was the best they could hope for, delivered to them by Ukrainian rider Nick Kalinin (Nutec – RT Motorsports by SKM – Kawasaki).

The Japanese manufacturer wrapped up the championship in fine style with a 1-2-3-4 at the Algarve International Circuit. Scott Deroue secured the win ahead of Manuel Gonzalez and Ana Carrasco – meaning that not only have they wrapped the manufacturers’ championship, but the riders’ championship will also go the way of Kawasaki.

Find out what Kawasaki rider will take the WorldSSP300 crown with the WorldSBK VideoPass!