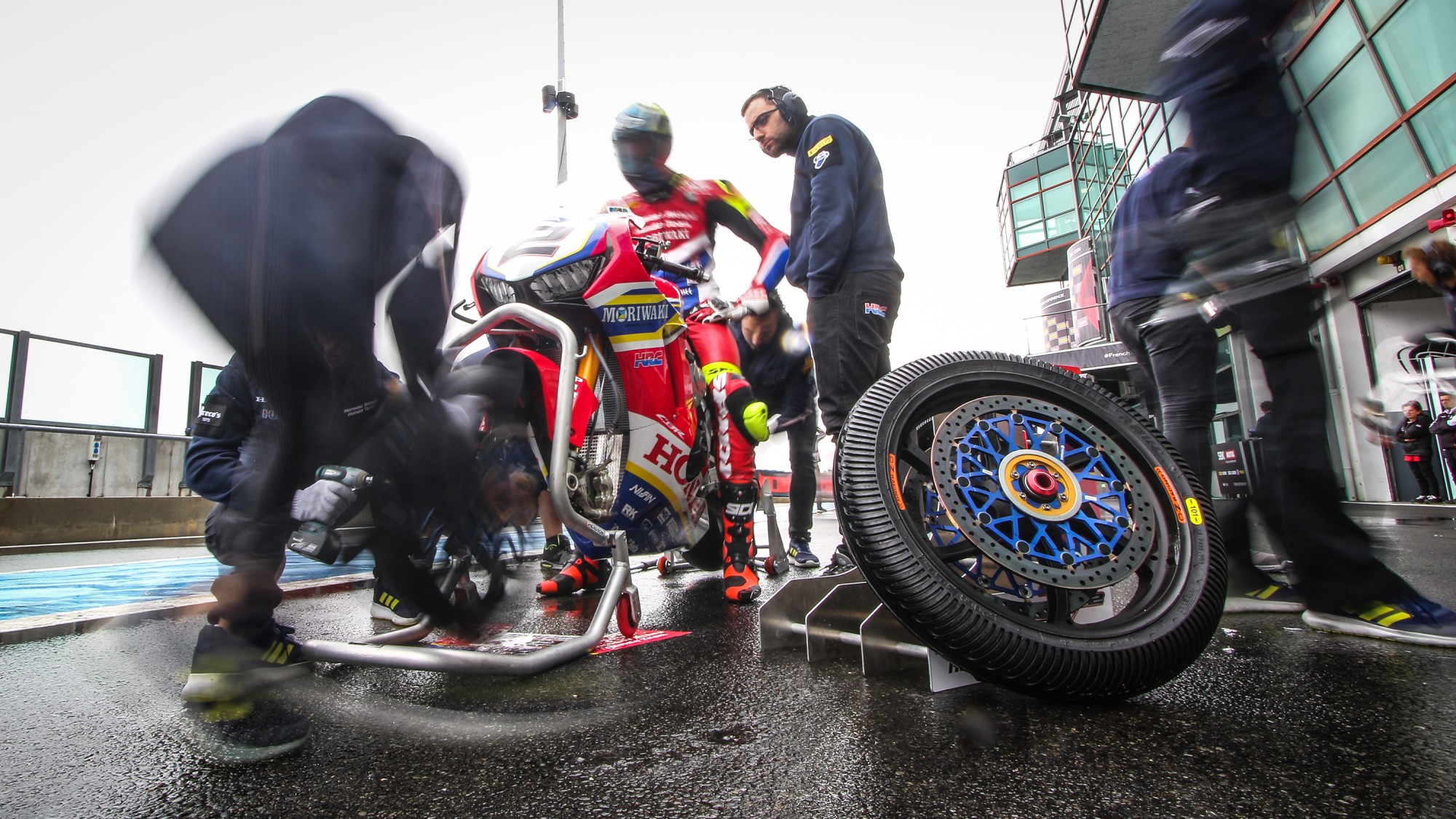 The Japanese manufacturer looks strong in the inclement weather conditions, with Alessandro Delbianco showing top six capabilities for the weekend ahead

It was a strong day at the office for both Honda outfits, as the Moriwaki Althea Honda Team and the Althea Mie Racing Team featured consistently in the top positions. Moriwaki Althea Honda Team’s Leon Camier and Ryuichi Kiyonari both showed good pace in the top three at times, before finishing 11th and 15th respectively. However, there was another Honda who proved to have strong pace once again in the inclement weather.

Alessandro Delbianco excelled at Donington Park during Race 1 to take his best result of the 2019 season and once again, the rain gave the Italian to show his WorldSBK prowess. Running strong inside the top ten all session, a flurry of late lap times in drying FP1 conditions left Delbianco outside of the leading positions. However, a determined Delbianco popped up to sixth overall and finished the day as top Honda.

Delbianco reviewed the opening day of action at Magny-Cours, saying: “This is my best day in World Superbike as I am sixth in Free Practice. With the rain, I have a great feeling. However, today in FP2, I don’t improve my feeling because when I exit the corner, I don’t have the grip and I am sliding.

“In FP1, when there is no rain, but the track is not dry, I have a very good feeling. Step by step and lap by lap, I improve, and this is my first step. I want to improve tomorrow. I hope for wet races, but this weather is not good for me tomorrow, as it looks sunny!”

Over at the Moriwaki Althea Honda Team garage, they too were positive of their wet weather pace, with Ryuichi Kiyonari shining brightly in fourth in FP2, which was far wetter than the opening session of the weekend in the morning. Camier too was looking good, back from a shoulder injury that has kept him out for four months before finishing FP2 in sixth.

Midori Moriwaki spoke of her team’s strength in the wet, saying: “It has taken Leon a long time to come back from injury but to be straight up there is very positive. Both guys are full gas now and hopefully, they can make a very good weekend. Both riders are making improvements with every lap.

Commenting on the riders’ work throughout the season, Midori said: “I am happy with the work they’ve done in the season, they are wonderful and although the results weren’t very good in some races, they have stayed strong. It is hard to keep a high motivation in this difficult time but still, they are gentlemen and great riders; I appreciate it!”

It has been a positive week for Honda, who have signed Alvaro Bautista from the ARUBA.IT Racing – Ducati to spearhead their new HRC effort in 2020.