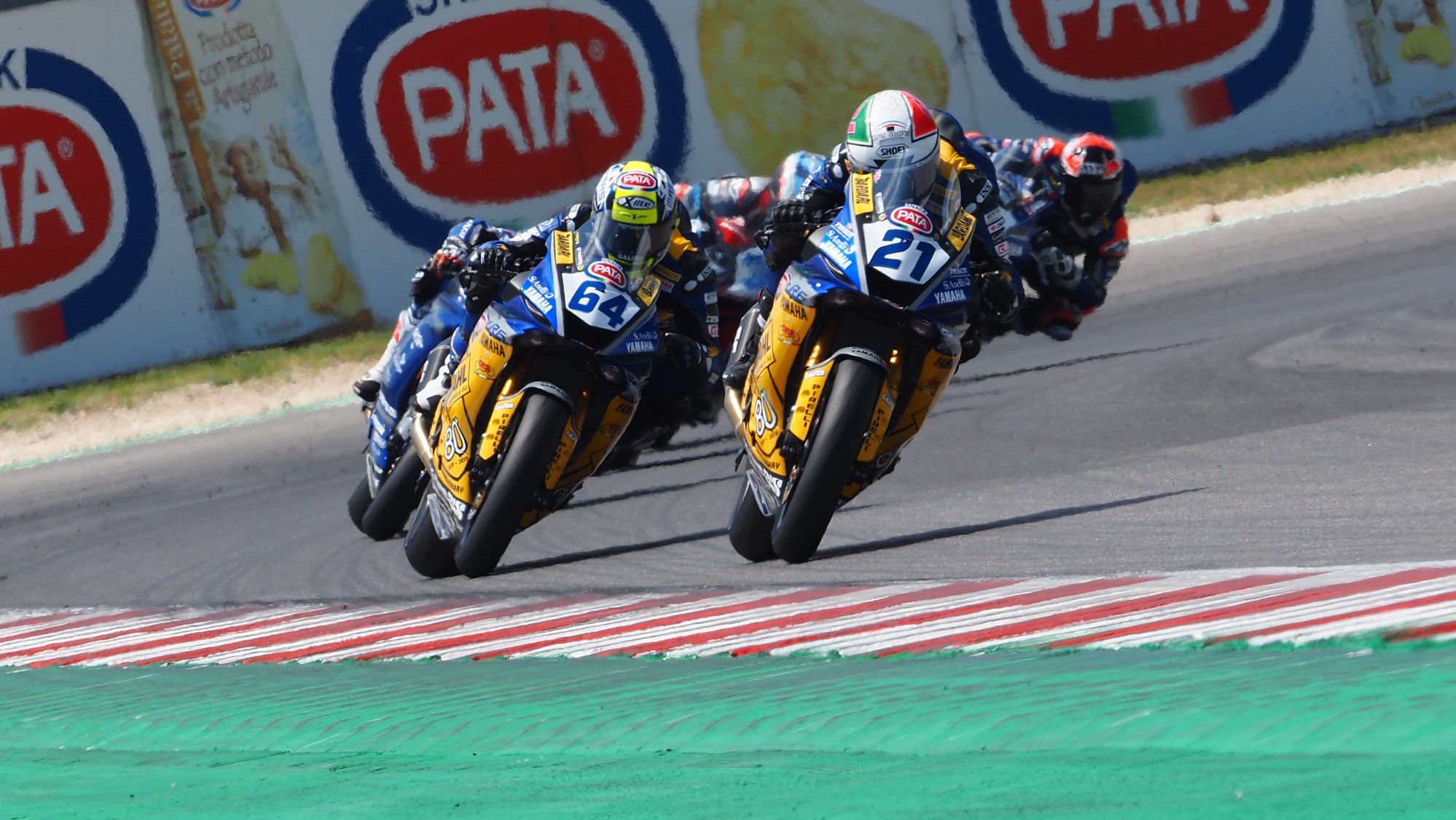 The 2019 WorldSSP season is proving to be one of the most intense in recent years, with BARDAHL Evan Bros. WorldSSP Team riders Randy Krummenacher and Federico Caricasulo literally going head-to-head for World Supersport supremacy. The championship lead at 22 points and other riders set to interfere, the final round at Donington Park before a lengthy Summer break will be pivotal in who carries confidence forward.

29-year-old Randy Krummenacher hasn’t put a foot wrong so far in 2019, as he continues to rack-up big points. The Swiss rider has finished first or second in every WorldSSP race this season, with one of his best wins coming at the Misano World Circuit “Marco Simoncelli” last time out. Barging his way to victory with just two corners remaining, the WorldSSP title pendulum swung in favour of Krummenacher, but now he heads to a circuit of which he has just one podium at – back in 2016. Can he remount the rostrum in 2019?

Chasing his teammate as hard as possible, Federico Caricasulo came close to reducing the points gap at the top to just 12 points at Misano but was beaten in the dying moments of the WorldSSP encounter. Now, he turns his attention to Donington Park – a track at which the Italian has yet to feature highly at, with a best result of sixth coming in 2018, whilst he suffered a DNF in 2017. Caricasulo must take points away from Krummenacher, to go into the mid-season break with the momentum.

With another race passing without a win, Jules Cluzel (GMT94 YAMAHA) has seen his championship hopes decrease a little bit more, as the Frenchman has struggled to keep on the pace of Krummenacher and Caricasulo. Scheduled to make his 77th WorldSSP start, the 30-year-old has a stunning record at Donington Park despite having never won, with three second-place finishes and two third-places to his name. Just five races remain and Cluzel will be eager for a first Donington Park win to shrink the points gap to the top from 53 points.

It was another impressive performance by Hikari Okubo (Kawasaki Puccetti Racing) at Misano, with the Japanese star taking fifth – his second-best result of the season. Okubo has finished every single race in 2019 and will look to see the streak carry on in the United Kingdom. Donington Park has yielded just one top ten for the 25-year-old, with ninth in 2017. The last Japanese WorldSSP podium came on British soil at Silverstone in 2007 with Katsuaki Fujiwara. Can Okubo end the 12 year wait for another Japanese rostrum?

Okubo isn’t the only Kawasaki who has shone in recent events, as Lucas Mahias (Kawasaki Puccetti Racing) has been a strong contender for the leading positions. The Frenchman gave the manufacturer their first pole since 2017 at Misano before achieving his first podium of the season. Mahias’ form at Donington Park is mixed, with a fifth last season but a second in 2017. He will be hoping for a second consecutive podium of the season at the famed British venue.

Completing the top half-dozen in the championship is Austria’s Thomas Gradinger (Kallio Racing). It was a difficult Misano for Gradinger – who has been a revelation in 2019. Having only qualified in 12th, he salvaged a ninth-place finish; his worst finish in a race since he was 12th at Imola last year. Achieving an eighth place at Donington Park, the 22-year-old will be eager to return to the podium in WorldSSP and close the gap on those ahead of him.

There’s an array of other riders to keep an eye out for, with Raffaele De Rosa (MV AGUSTA Reparto Corse) eager to make up for his Misano mistake. Isaac Viñales (Kallio Racing) showed more promise in Misano until a crash ended his race prematurely, whilst Hannes Soomer (MPM WILSport Racedays) aims to repeat his top seven finish for a second consecutive race, not to mention wildcards from British Supersport; Jack Kennedy and Brad Jones, on their Appleyard Macadam Integro Yamahas.

Watch the 2019 WorldSSP season continue with the WorldSBK VideoPass!