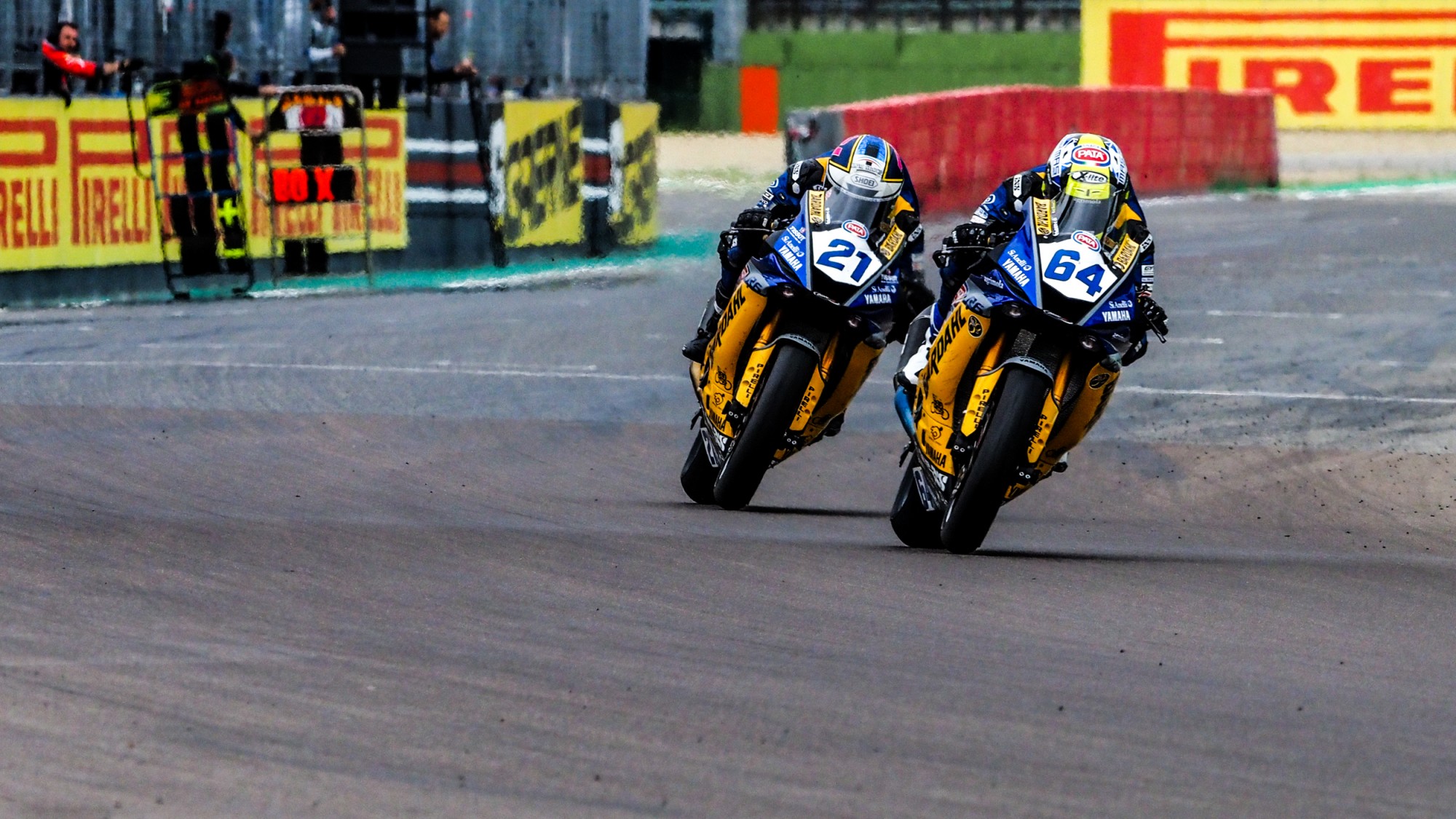 Krummenacher and Caricasulo have thus far dominated the series, but a BARDAHL Evan Bros one-two is far from guaranteed…

Rossi/Lorenzo, Senna/Prost, Rea/Sykes… Some of motorsport’s fiercest rivalries have originated between the confined walls of a single team garage; two riders wearing the same colours but leaving camaraderie aside for the greater goal of a world championship.

It’s not often that fans get the opportunity to witness two, evenly matched teammates face off for a world title, yet that has been the one consistent feature of this season’s FIM Supersport World Championship. Five rounds in, five podiums with both BARDAHL Evan Bros riders on it; an utter domination of both the Team and Riders’ Standings.

Randy Krummenacher currently leads Federico Caricasulo by 22 points, with pit-lane and technical complications at Phillip Island and Imola, respectively, slightly tilting the balance in the Swiss rider’s favour. In the last two rounds both men have traded the race lead in the final lap, while the average distance between both men at the chequered flag (Phillip Island not included) is of barely 0.2s in Krummenacher’s favour.

This budding rivalry is quite unlike anything seen in World Supersport in the past decade, yet it is far from the first time two members of the same squad have topped the standings. Back in 2008, a young Northern Irishman named Jonathan Rea entered the paddock in a deceivingly timid fashion. Winless after seven races while his teammate Andrew Pitt dominated the series, they sat 46 points apart; four rounds and three Rea wins later, that gap had dropped to 11.

While Rea’s championship aspirations were dashed through no fault of his own in the penultimate race of 2008 (while Pitt romped on to his second WorldSSP title), the pair did share some extraordinary on-track battles through the year. Two to highlight: a frantic last lap duel at Assen, won by the Australian by 0.014s; and an equally tight tussle at Brno, 0.020s separating the rookie and the veteran for Rea’s first WorldSSP win.

Flash back four years for a similar double Ten Kate encounter at the top of the standings, although on this occasion the results were slightly more lopsided. The Dutch outfit recruited an Aussie duo for 2004: Karl Muggeridge and Broc Parkes. But while the year finished with the duo in first and second position, the distance between them – 72 points – was far from thin.

In fact, it only takes a few rounds for large gaps to develop between teammates, even after an even start. Krummenacher knows this best than most. In 2016 he led the championship standings for over two months at the start of the season, with his companion in the Kawasaki Puccetti squad a solid second. But this was no ordinary teammate. Kenan Sofuoglu went on to win five of the remaining eight races (and his fifth world crown along the way), leaving his Swiss rival a full 76 points behind. To make matters worse, Krummenacher lost his runner-up spot in the last race of the season to one Jules Cluzel – the man currently sitting third in the standings. A stark reminder that the championship is far, far from a done deal for the men in yellow.

Will any of the BARDAHL Evan Bros riders slip up in Jerez, or can they continue their all-conquering ways? Find out LIVE and OnDemand with WorldSBK VideoPass!