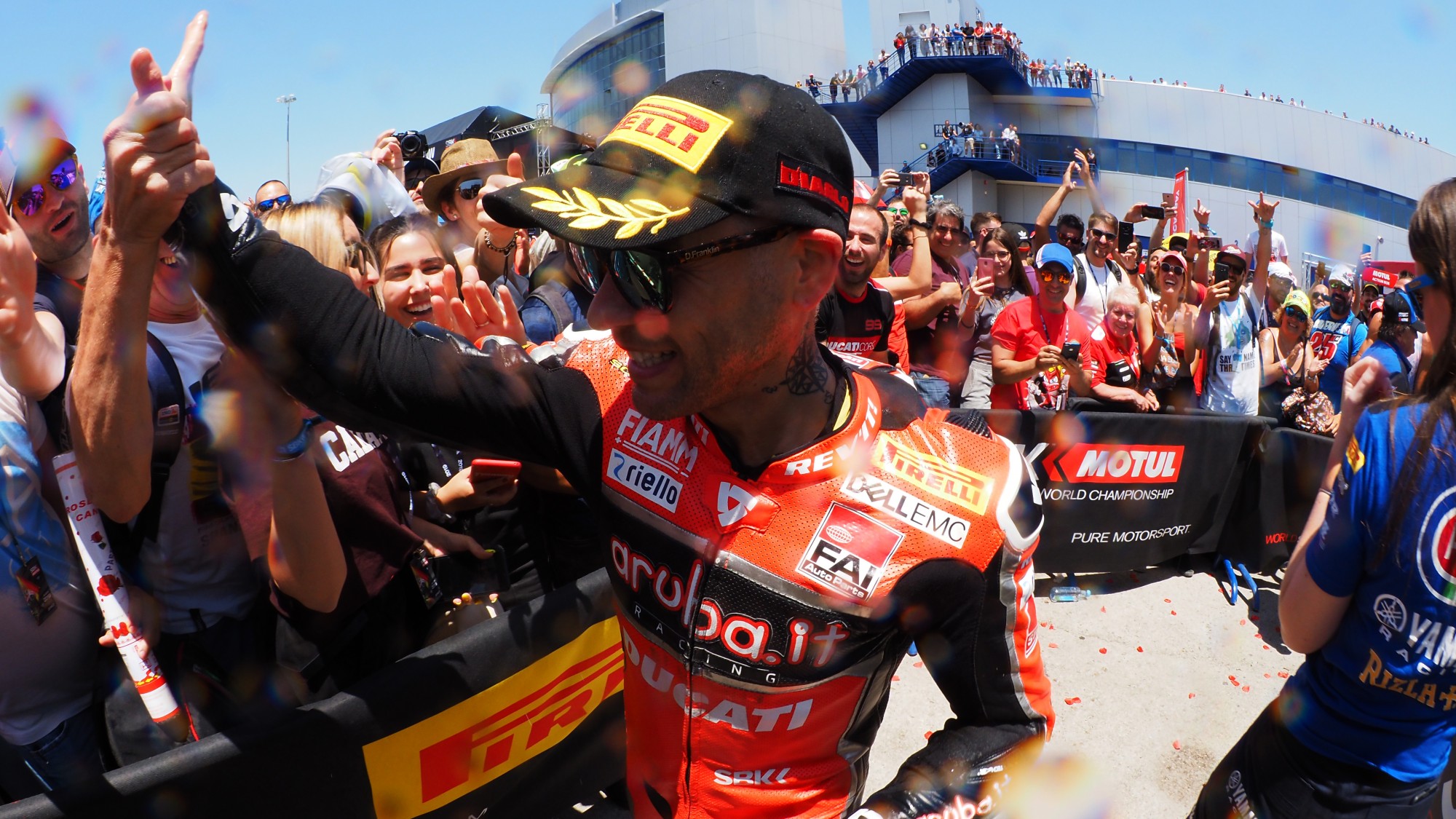 The Spaniard took the lead and never looked back, with an inspired ride and motivation from the skies above…

UPDATE: Jonathan Rea has been handed penalties following his collision with Alex Lowes on the final lap, meaning he doesn’t feature on the podium.

Taking his 12th win of the season may have had to wait until Jerez, but a hair-raising reception for Alvaro Bautista from the crowd meant that he has become a hero in Spain. Bautista dominated Race 1 in fine style to take another win in the 2019 MOTUL FIM Superbike World Championship, with nearest challenger in the title race Jonathan Rea (Kawasaki Racing Team WorldSBK) involved in a last lap-last corner fracas with Alex Lowes (Pata Yamaha WorldSBK Team).

Taking the lead between Turn 4 and 5 on the opening lap, nobody challenged Alvaro Bautista for the rest of the race, as the Spaniard set a scorching pace. Getting into a rhythm early on, Bautista never looked in doubt of winning at Jerez for the first time since his first ever World Championship victory back in 2006 in 125cc Grand Prix.

Speaking after the race, an elated Bautista said: “After seeing the practice, I expected the race to be closer. Here in this track, in these conditions with this heat, the race was different to the practice. If you make a good pace in the practice then in the race, it is difficult to replicate. Fortunately, I could make a good pace, especially in the first laps. I saw the gap was getting bigger and bigger and I decided to manage the tyres and my energy.”

Becoming the first Spanish rider to win at Jerez, Bautista made it only the fifth occasion where a Spanish rider has won on Spanish soil – of which four have been achieved by Alvaro himself. Along with this, he faces more records, as one more win will level him overall in the wins table with Eugene Laverty and Aaron Slight, whilst winning the remaining two races will see him equal the number of wins by Scott Russell, John Kocinski and Ben Spies – all of which won championships.

“I am really happy because I am the first Spanish rider to win at Jerez in WorldSBK and this is very special; in front of all my family, all my friends, my fan club and my people. For sure, it is special to me too, because I want to dedicate it to my grandfather, as he passed away a few days ago. He gave me a lot of energy from the skies, so this victory is for him.”

Can Bautista conquer the Circuito de Jerez – Angel Nieto again? Find out with the WorldSBK VideoPass!