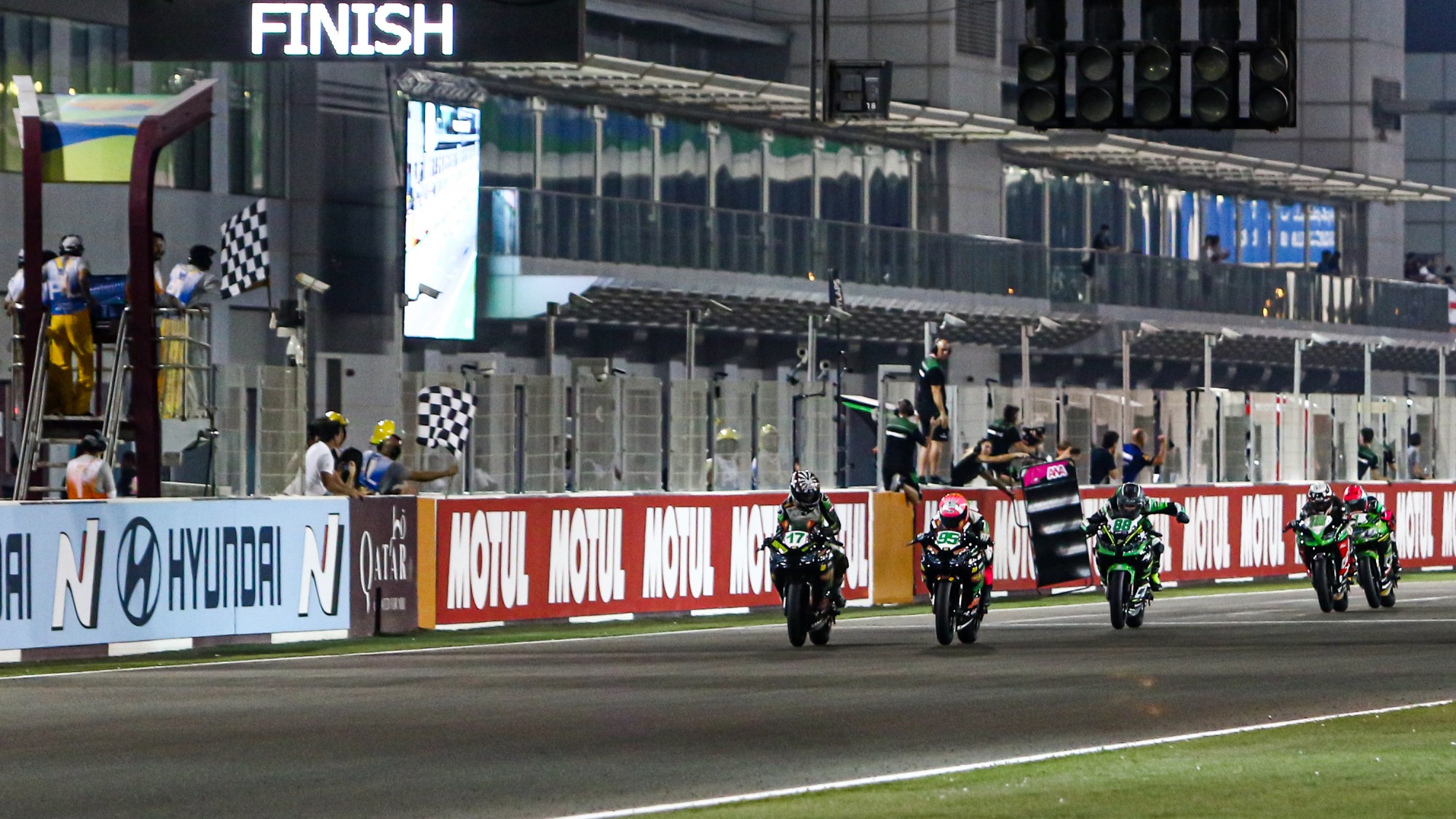 The sensationally unpredictable 2019 World Supersport 300 ended with just 0.010s splitting the first two over the line!

The final WorldSSP300 race of the 2019 season was an absolute belting spectacle, with late lunges, unexpected race leaders and a photo finish making for the usual energising fashion from the feeder class. In the end however, it would be Dutch 1-2 for the third time in WorldSSP history, as Kawasaki MOTOPORT’s Scott Deroue headed home teammate Koen Meuffels in an enthralling slipstreaming battle that went down to the very last drag race to the line.

Starting back in eighth and 16th respectively, Deroue and Meuffels had their work cut-out to get the better of the opposition, including 2019 WorldSSP300 Champion Manuel Gonzalez (Kawasaki ParkinGO Team) and Ana Carrasco (Kawasaki Provec WorldSSP300), in her final race as reigning Champion. Despite looking like the fastest rider throughout the entirety of the weekend, Carrasco couldn’t make it work in the race.

Various leaders took their chances but on the final lap, Meuffels looked like he had enough of a gap. But teammate Deroue stormed through from fifth in the final half-a-lap, before slipstreaming Meuffels to the line, taking a fifth career victory and securing second in the WorldSSP300 title, a personal best for him.

Speaking after the race, Deroue said: “To be honest, it was a very difficult weekend for me, because we hadn’t been inside the top five – only in Warm Up, as we were struggling a bit. Then, we had a solution, but I knew it was going to be very difficult, because Ana is so fast here. Sometimes she pulled a gap and I knew I had to push. I overtook Ana, I overtook Gonzalez and then I overtook Ieraci, before getting my teammate on the straight. It’s awesome to be second in the World Championship.”

Deroue’s teammate was just as pleased, as the former WorldSSP300 race winner from 2018 has had a turbulent 2019 season. Switching teams halfway through the year, he looks like he has found a bike that suits his style and that can put him back on the top step of the World Supersport 300 rostrum.

Speaking after the race, Meuffels said: “I am so happy, this weekend didn’t start so well as I had to start from 16th, but on Saturday morning in Warm Up, we found the right setting, so in the race, I could gain positions and fight for first place. I am second, my teammate is first and that means that it makes him second in the WorldSSP300 Championship, which is also great for the team.”

Deroue and Meuffels’ podium makes it the 20th podium place for The Netherlands in WorldSSP300, with only Spain ahead on 36. Meuffels also became the 11th podium finisher in 2019, the same as the inaugural season for the class back in 2017. Going into the off-season at the forefront of everyone’s minds, both Deroue and Meuffels could be the dynamic Dutch duo to keep an eye on in 2020.

Follow all of the action leading up to the 2020 WorldSBK, WorldSSP and WorldSSP300 seasons with the WorldSBK VideoPass!