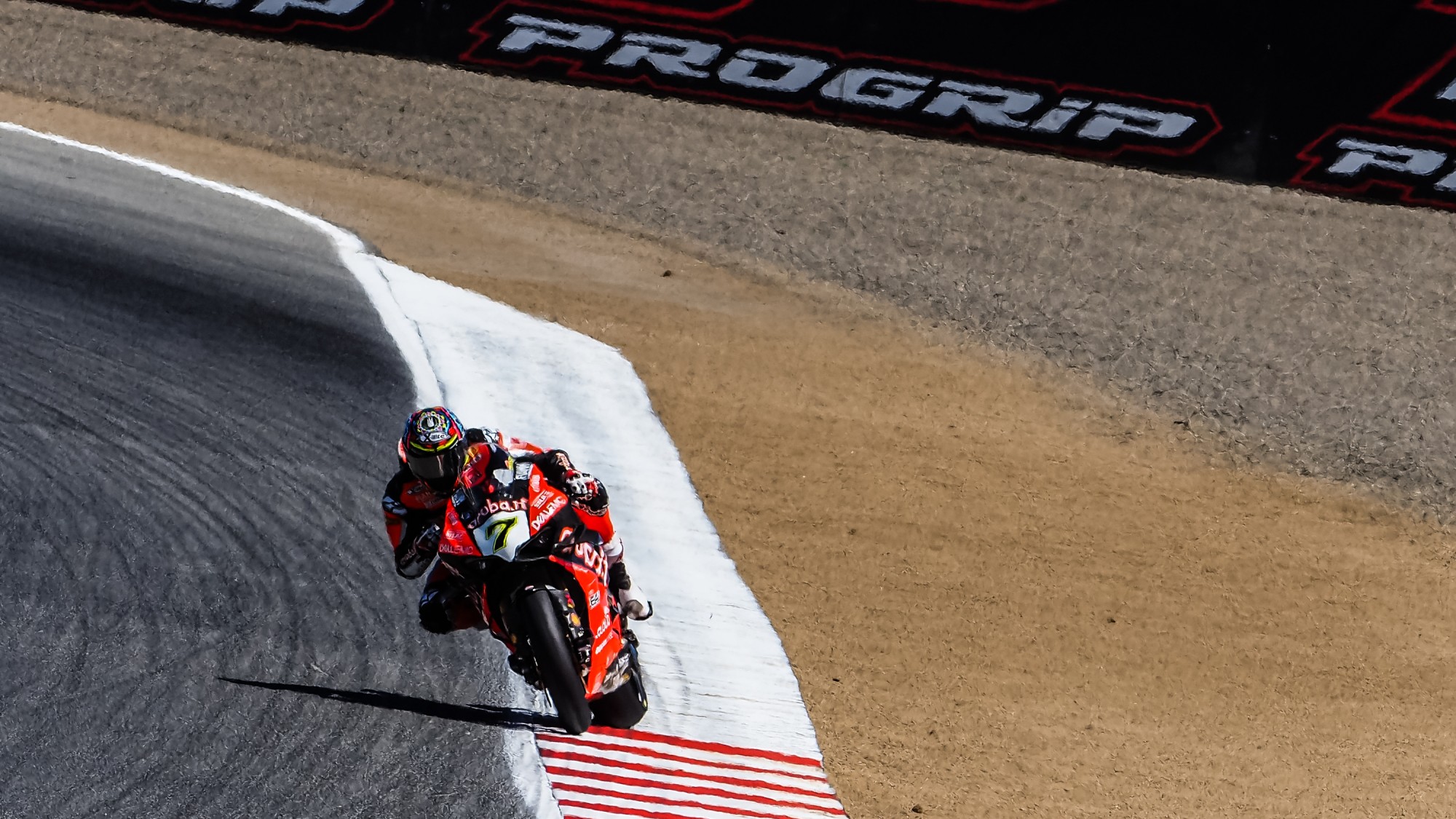 The Ducatis are coming: it is a three-way fight for supremacy at Laguna Seca, whilst four manufacturers are inside the top six!

The 2019 MOTUL FIM Superbike World Championship concluded day one at the WeatherTech Raceway Laguna Seca with plenty of talking points. Racing to the top of the timesheets, Chaz Davies (ARUBA.IT Racing – Ducati) has thrown down the gauntlet ahead of two action-packed race days, with a slender advantage over his rivals as the field tightened up at the end of day one.

Back to his best, Chaz Davies hit first position in the dying minutes of day one, making a happy return to a happy hunting ground at Laguna Seca. Davies looks like he may well be a real contender for victory this weekend, as he looks to find his mojo before the Summer break. Returning to the top three, teammate Alvaro Bautista found strong pace in FP2 to prove that Jonathan Rea wasn’t going to have it all his own way, finishing third, adding to the mouth-water title fight.

The most successful rider in the history of WorldSBK at Laguna Seca, Jonathan Rea (Kawasaki Racing Team WorldSBK) set about his business immediately in FP2, with the Ulsterman spending much of the session resting on his FP1 time as the others went in pursuit. The four-time Laguna Seca race winner looks to continue his form from Donington Park and will set about seeking an extension to his championship lead, missing out on top slot after FP2 by just 0.032s. Teammate Leon Haslam made vast improvements in FP2, finishing fifth.

It was another strong performance from 2013 WorldSBK Champion, Tom Sykes (BMW Motorrad WorldSBK Team). The 33-year-old Brit has won three-times at Laguna Seca and after more podium success at Donington Park last time out, he will go in the hunt for some success in the United States. Sykes improved his time mid-way through FP2, but his machine broke down in the final three minutes of the session, leaving him fourth overall. His returning teammate, Markus Reiterberger, was 16th after day one of his Laguna Seca debut.

Three Independent team riders made it into the top ten, with the first of them being Loris Baz (Ten Kate Racing – Yamaha) up in sixth position and was top Yamaha. The Frenchman has certainly found form in just his fourth round back in the WorldSBK paddock, with plenty still to come. Seventh place went to Toprak Razgatlioglu (Turkish Puccetti Racing), who made a solid start to his Laguna Seca weekend. Jordi Torres (Team Pedercini Racing) completed the top ten.

In eighth position, it was the first of the Pata Yamaha WorldSBK Team bikes, with Alex Lowes. The British rider had a fairly quiet session, although will have a good platform to build on as the weekend looks set to progress. His teammate – Michael van der Mark – finished FP2 down in 12th place but on combined times, was up in ninth overall. With work to do for both of the Pata Yamaha WorldSBK Team machines, Saturday and Sunday will provide the perfect opportunity for them to refine their settings.

Watch WorldSBK action from the Geico U.S. Round at Laguna Seca with the WorldSBK VideoPass!