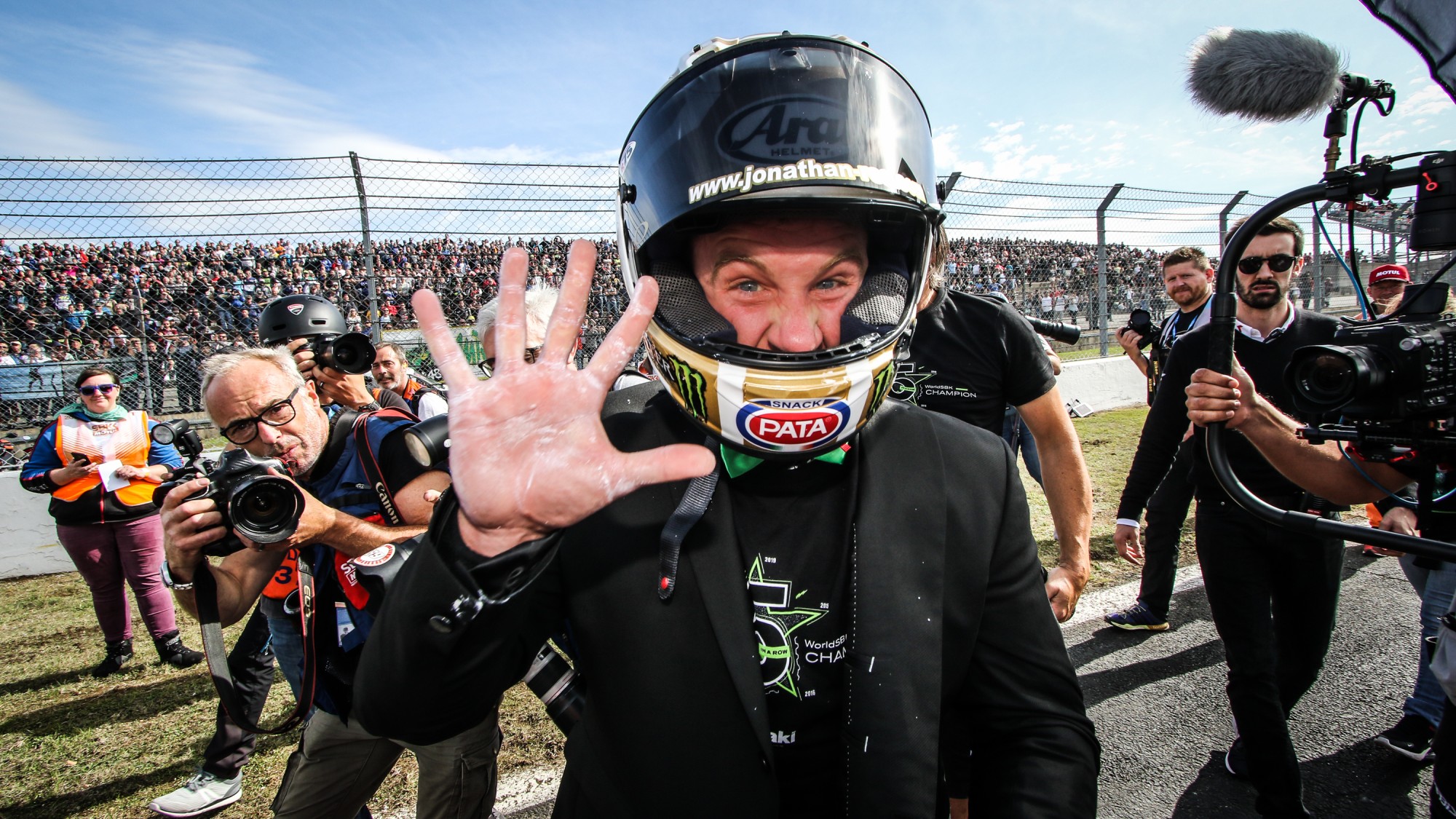 The rider with the most championships, wins and podiums in WorldSBK: Jonathan Rea’s records have been nothing short of sensational!

Not only has Jonathan Rea (Kawasaki Racing Team WorldSBK) clinched a fifth consecutive crown in the fastest production-based championship in the World, but he’s romped to the top of plenty of other standings too. This makes him statistically the best WorldSBK rider in the history of the championship. So, from hitting the most numbers of wins to being on the podium in more races than anyone else, Jonathan Rea has been nothing but admirable in terms of his form. And despite all his success already, more history could well be on the horizon…

Starting with wins, Rea is clear at the top with 83 so far, an astonishing 24 clear of his nearest challenger, Carl Fogarty. Rea only equalled ‘King Carl’ in Race 2 at Imola last season, making his achievement even more impressive. In terms of his importance to the brand that is Kawasaki, he has taken 68 wins so far in the five years he has been there, which is 48% of all of Kawasakis previous wins in WorldSBK. Rea has achieved in five seasons half of what the manufacturer achieved in 32 – his determination for winning shining through.

Moving on to podiums, Jonathan has achieved 162 thus far from his 274 starts, meaning that he has been inside the top three in a staggering 59.1% of his race appearances. And if you think that is a big number, wait until you see the stats from the five seasons in green. From 134 starts with Kawasaki, he’s been on the rostrum 120 times: as a percentage, that is 89%, the highest for a full-time WorldSBK rider with one manufacturer.

And the stats keep coming for Rea, having achieved the record number of fastest laps back in the Tissot Superpole Race at Misano this season, surpassing ‘Nitro’ Noriyuki Haga. All but 10 of those fastest laps have been with Honda. At the top of the career points standings, Rea once again has an advantage of 249, ahead of the second-placed 1996 and 2005 WorldSBK champion, Troy Corser. He is now fourth overall in the WorldSBK pole standings, with 22.

And these statistics will only get bigger and better as the Northern Irishman continues to show his prowess. Rea and Kawasaki have been a dominant force in the last five seasons and have proved resilient and immovable, even with the fierce arrival of Alvaro Bautista (ARUBA.IT Racing – Ducati) and the Ducati Panigale V4 R. Behind every great rider is a great team and Kawasaki have been able to give Rea the tools so that he can do the job. The question is, how much better will those stats look? What more records are on the horizon?

The first will be at Argentina, as he looks to surpass Sylvain Guintoli in the number of consecutive races in the points. Rea can draw level with Guintoli in Race 1 at San Juan, whilst a top nine finish at the new Argentina circuit will ensure that a new record is set – once again by Rea. This, coincidently, would also make it 200 consecutive races in the points for Kawasaki – equalling their personal best sequence.

Watch the records tumble further with the WorldSBK VideoPass!