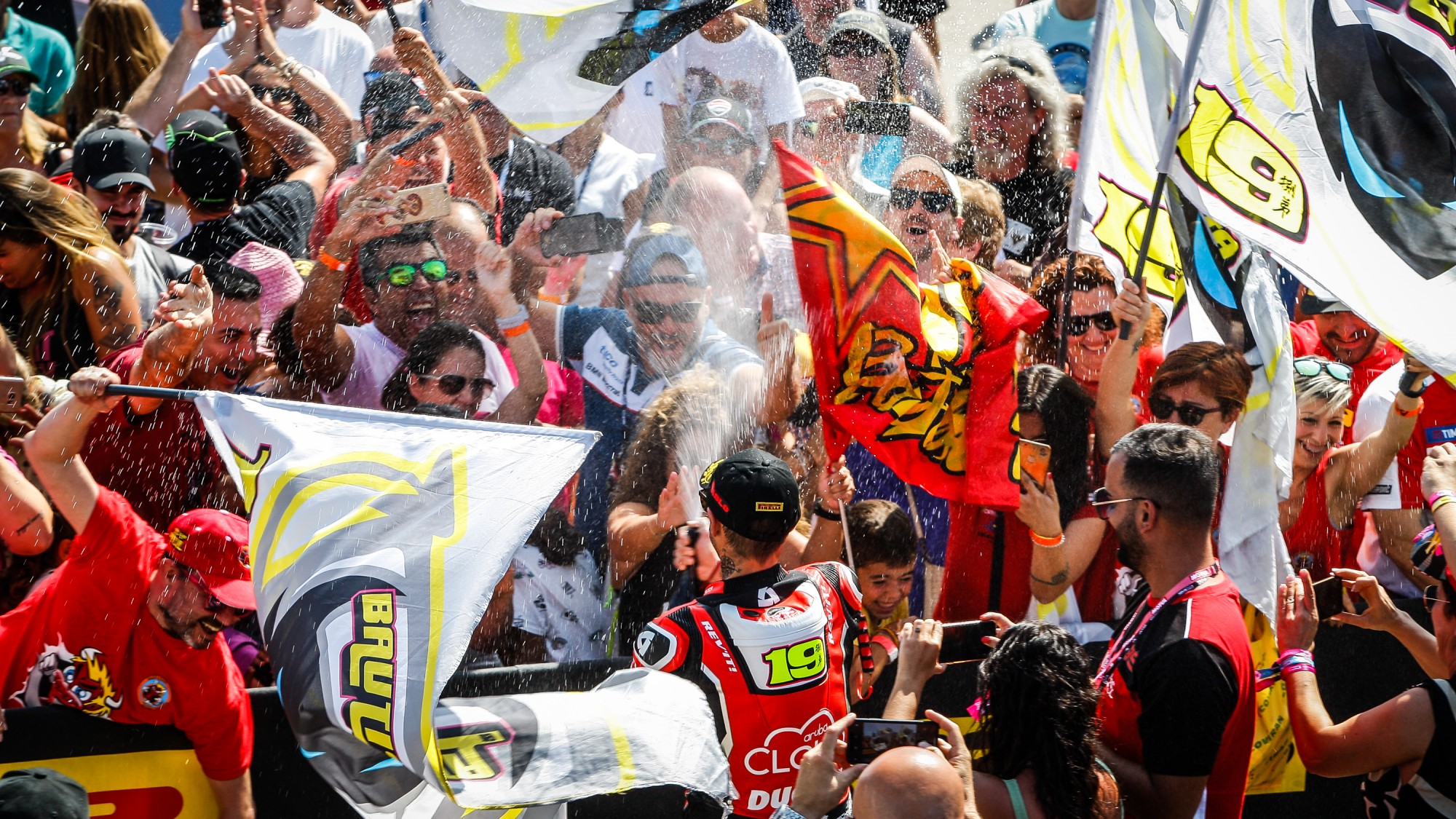 Just 0.111 separated Alvaro Bautista and Jonathan Rea at the chequered flag in Race 2, the closest finish of the 2019 season!

After a couple of rounds cost him dearly, Alvaro Bautista (ARUBA.IT Racing – Ducati) was back on top to take a win on his Portimao debut. The Spaniard gave himself plenty of work to do early on however, dropping to sixth on the opening lap before picking his way back through the order. But even then, he couldn’t give up as a motivated championship rival in Jonathan Rea (Kawasaki Racing Team WorldSBK) nearly pipped the 34-year-old on the run to the chequered flag.

Starting from second on the grid and the middle of the front row, Bautista got a terrible start, leaving him down in sixth on the opening lap. However, the recovery took no time as at the start of Lap 2 he was ahead of Michael van der Mark (Pata Yamaha WorldSBK Team). Two laps later, Alex Lowes (Pata Yamaha WorldSBK Team) was cast aside by a forcefully ruthless Bautista. On Lap 5, he got ahead of Leon Haslam (Kawasaki Racing Team WorldSBK), pickpocketing the ‘Pocket Rocket’ at Turn 1, before he blasted ahead of Rea and Toprak Razgatlioglu (Turkish Puccetti Racing) a lap later, only for the young Turk to have other ideas.

Breaking away from the chasing pack, Bautista eventually cleared Razgatlioglu, whilst Jonathan Rea dispatched of the Turkish rider in quick order too. Rea then stayed around one second behind Bautista and in the closing stages, made his way up to the rear end of the Ducati. Despite Rea’s best efforts, it was Bautista who would come out victorious in a hair-raising finish.

Speaking about his return to the top step, Bautista said: “It was a tough weekend for me, especially because of the pain in my shoulder and I do not feel 100%. Yesterday, I used up a lot of energy after the incident at the first corner, and today, in the morning, I felt a bit worse than yesterday. This afternoon, I lost a lot of positions on the start and I had to do another comeback race, but I wasn’t worried as I was in the leading group.

“In the last two laps, I felt a drop of energy and also the tyres, so I couldn’t ride as strong as I wanted. I was lucky that it was the last lap as I didn’t have any more energy, so in the end I am really happy. Until the mathematics say ‘no’ then you have to fight until the end. We will do our best and then see the final result.”

The Spaniard is now 91 points down on championship leader Jonathan Rea, with nine races to go. Will he be able to mount a bigger championship challenge at the next round in France, when WorldSBK heads to Magny-Cours?

Watch more of the championship unfold with the WorldSBK VideoPass!