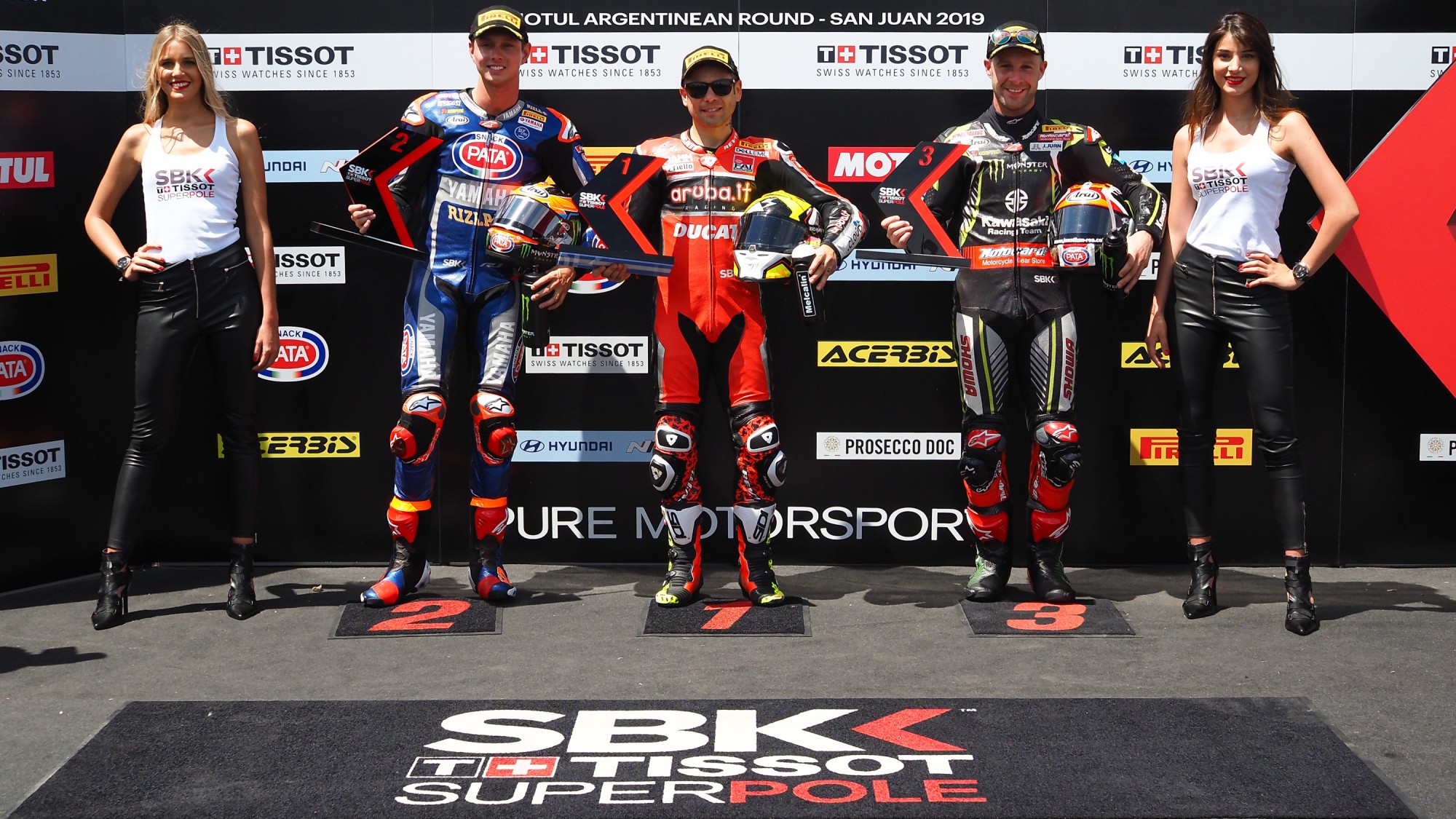 The 2019 MOTUL FIM Superbike World Championship is in its penultimate round of the year in Argentina at the Circuito San Juan Villicum. Saturday means Tissot Superpole and Race 1, with the WorldSBK class back on a good pace in the 25-minute Tissot Superpole session. With the track cleaned up and the sun beating down in the Land of Silver, it was Alvaro Bautista (ARUBA.IT Racing – Ducati) who took pole position, in a session where the qualifying tyre was not the choice of the field.

The session began in tentative fashion, with riders feeling their way into the session in a precarious fashion. It was a disaster for Loris Baz (Ten Kate Racing – Yamaha), as the Frenchman suffered a nasty highside at the final corner. Baz was up and relatively OK, but he started his Tissot Superpole session on the back foot. With the first ten minutes complete, Alvaro Bautista was the rider on top, but there were plenty of riders surprising, with the likes of Alessandro Delbianco (Althea Mie Racing Team) in sixth and Leon Camier (Moriwaki Althea Honda Team) in eighth. Home-hero Leandro Mercado (Orelac Racing VerdNatura) was marooned in pitlane with a technical issue.

And in extraordinary and perhaps unusual fashion, the order remained exactly the same, with the qualifying tyre not yielding strong lap times. Therefore, Alvaro Bautista took his first pole position since Assen on his first visit to San Juan, whilst Michael van der Mark took second place and back-to-back front rows for the first time in his career. Jonathan Rea attempted to take the pole away from Bautista on his final lap but couldn’t improve in position, cementing his third place.

It was a career-best Tissot Superpole performance for Toprak Razgatlioglu, who was confirmed in fourth place and was top Independent rider. Alex Lowes was rooted in fifth place and made it both Pata Yamahas in the top five, whilst it was a second consecutive second-row start for Michael Ruben Rinaldi (BARNI Racing Team), with the Italian securing sixth.

Chaz Davies will lead the charge from the row three from seventh, as the Welshman made a bold call to remain on the race tyre for the duration of the session. Behind him, it was the biggest surprise of the weekend, as Alessandro Delbianco (Althea Mie Racing Team) rocketed to Honda’s and his best Superpole session of the 2019 season. Delbianco is ahead of GRT Yamaha WorldSBK duo of reigning WorldSSP Champion Sandro Cortese and 2018 San Juan pole-sitter, Marco Melandri.

Big names outside the top ten include 2013 WorldSBK Champion Tom Sykes (BMW Motorrad WorldSBK Team) down in 13th, the first time he has been off the first two rows after participating in a WorldSBK Tissot Superpole session since Magny-Cours in 2015. Leon Haslam (Kawasaki Racing Team WorldSBK) was all at sea as he was down in 14th place on his first time in San Juan, whilst Loris Baz managed to get back out but was only 18th. Leandro Mercado didn’t complete a lap.