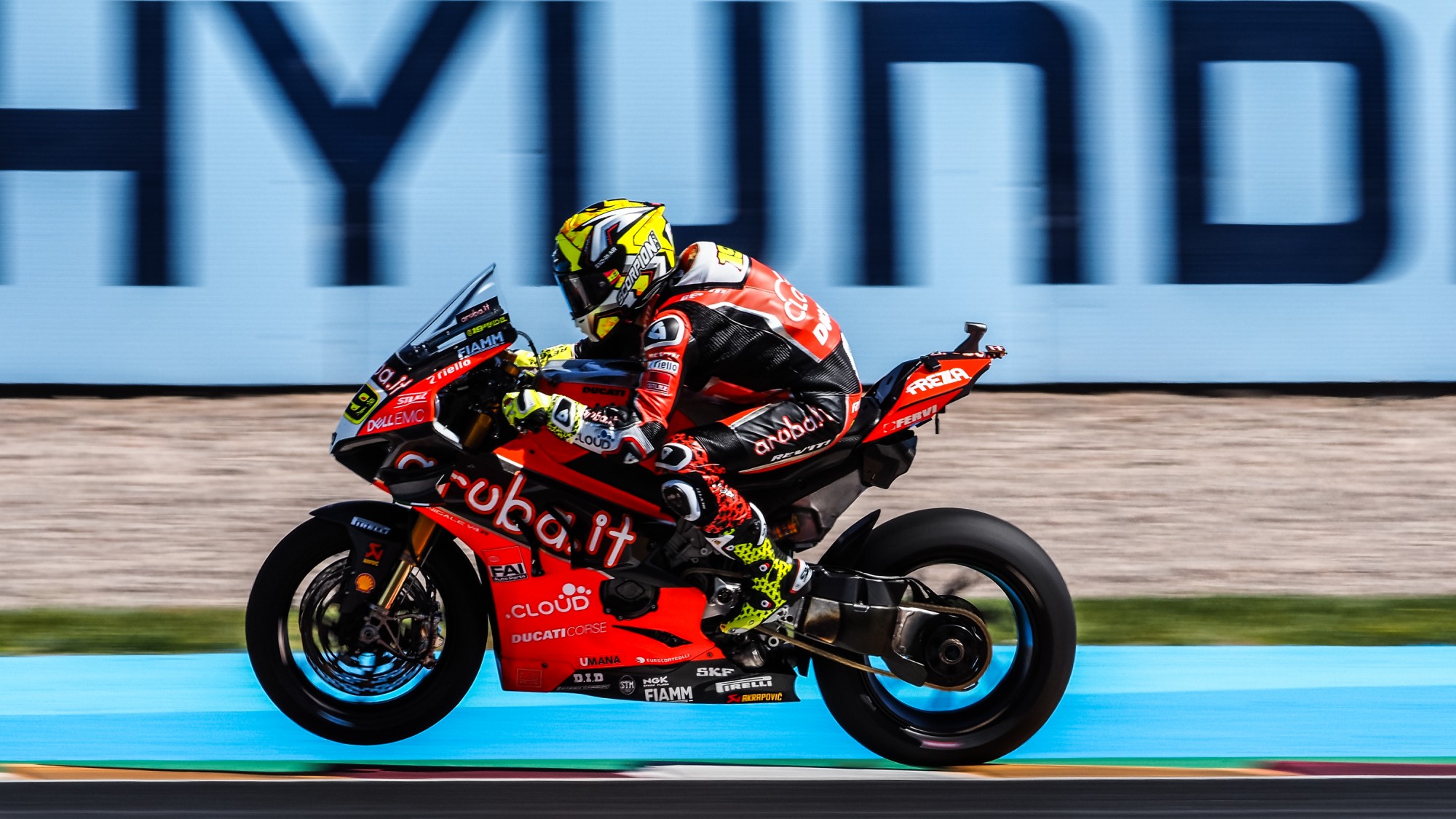 The second ever visit to Argentina for WorldSBK is looking like it will be a closely matched contest, whilst there’s plenty of surprises from third downwards too!

With the temperature rising, the WorldSBK field took to the track once again, with lap times straight away better than those achieved in the first session of the day in the morning. With the track cleaning up and the riders becoming more and more comfortable, it was Alvaro Bautista (ARUBA.IT Racing – Ducati) who leads the field into the remainder of the weekend, with his opposition playing catch up.

The long straights of San Juan provided the perfect opportunity for the Ducati Panigale V4 R to stretch its legs, with Alvaro Bautista making the most of that chance. Making his debut at the Circuito San Juan Villicum, Bautista took to the Argentina asphalt like a duck to water and having led FP1, the Spaniard was on top again in FP2. Chaz Davies (ARUBA.IT Racing – Ducati) sat out much of the morning session but came to the fore in the afternoon on the much cleaner circuit. The Welshman was fourth overall and looks to be in for a strong weekend in Western Argentina.

Crowned Champion last time out and blitzing to double success at San Juan last year, Jonathan Rea (Kawasaki Racing Team WorldSBK) opened his weekend strongly. The undulations and aggressive direction changes suited the Northern Irishman’s style and he finished the day in second overall, despite leading the session almost to the chequered flag. Teammate Leon Haslam had a much harder introduction to racing in Argentina, as he crashed heavily at Turn 15 during the first moments of FP2. The ‘Pocket Rocket’ was battered and clattered but his steely determination saw him finish in seventh overall.

Leading the Independent charge in South America, Michael Ruben Rinaldi (BARNI Racing Team) was third come the end of the day, having been third in FP1. The Italian improved his lap time late on in FP2 and then lifted himself up the order on his last flying lap, finishing inside the top three. Toprak Razgatlioglu (Turkish Puccetti Racing) was sixth on day one in San Juan. The Turkish rider, who took his first win back in France at Magny-Cours, looked in fine form and will be keen to repeat this achievement again. Sandro Cortese (GRT Yamaha WorldSBK) was two places behind in eighth.

Tom Sykes (BMW Motorrad WorldSBK Team) was once again flying the German manufacturer’s flag, as he looks to dial himself in for another strong result aboard the S 1000 RR. Sykes completed more than 25 laps despite missing much of the first session, with the track being too dirty for the Brit’s liking. Sykes completed the session strongly in fifth place, looking strong all through session. Teammate Markus Reiterberger struggled to gel with the Argentinean layout on his first appearance at the circuit and was down in 17th. The German rider managed to pull off a miraculous save at Turn 15.

Having locked out sixth to tenth in the morning session, Yamaha consolidated their pace in Argentina, albeit further down the top ten than they’d have liked. Alex Lowes (Pata Yamaha WorldSBK Team) was inside the top five for most of the session but completed proceedings in ninth position. Lowes’ top ten start to his weekend comes just hours after the British ace was announced as Jonathan Rea’s teammate for 2020. Michael van der Mark (Pata Yamaha WorldSBK Team) completed the top ten.

Outside of the top ten, Leandro Mercado (Orelac Racing VerdNatura) gave the home crowd a pleasant 12th place, whilst 2018 pole-sitter Marco Melandri (GRT Yamaha WorldSBK) was down in 14th. Top Honda honours went to his fellow countryman Alessandro Delbianco (Althea Mie Racing Team) in 15th, whilst Eugene Laverty (Team Goeleven) was off the pace at the back of the field.