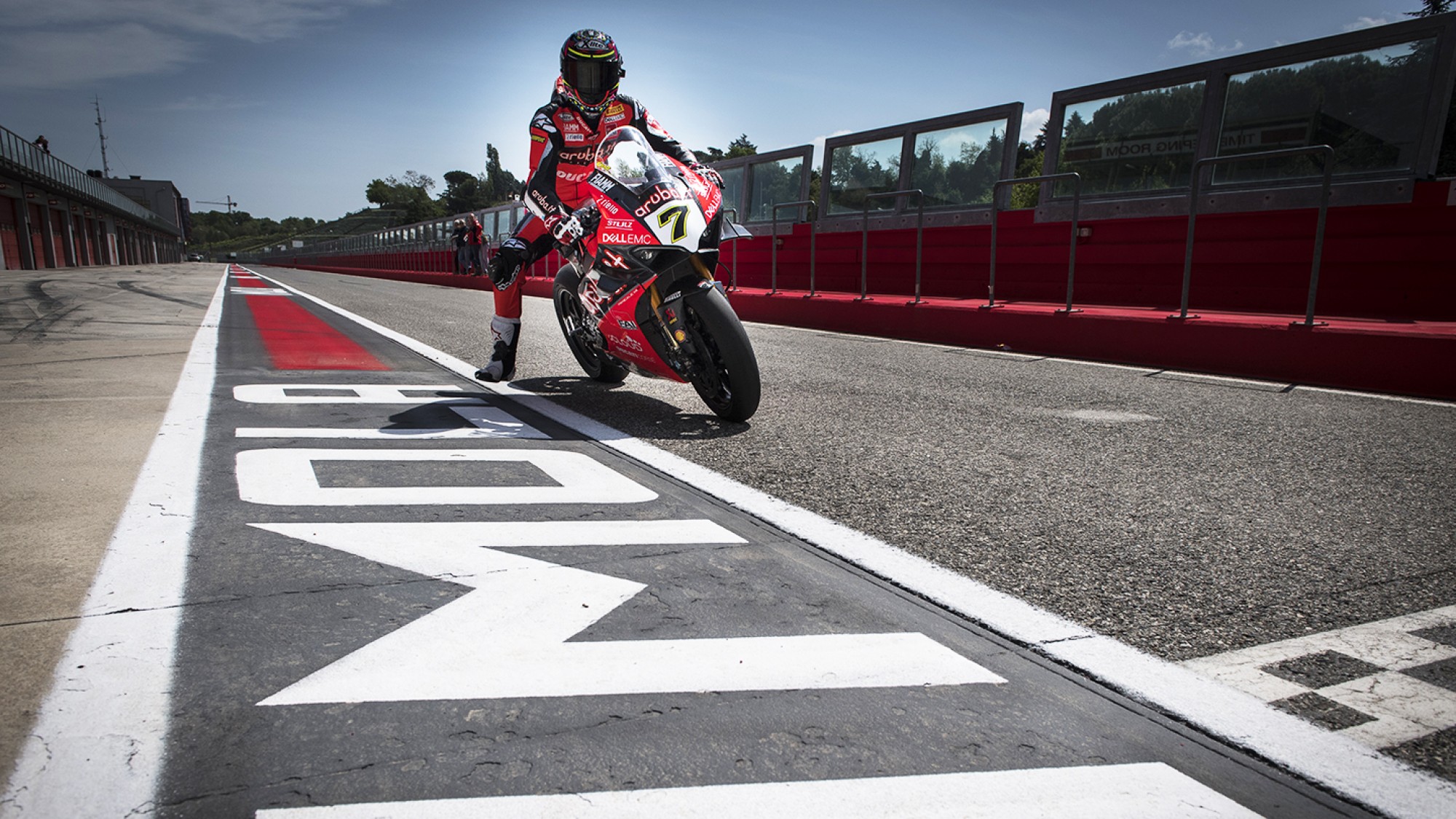 The Aruba.it Racing - Ducati riders put in some laps at the Italian race track before a sudden downpour disturbed track activity towards the end of the day

There are just two weeks left before the MOTUL FIM Superbike World Championship will return into action for Round 5 of the season at the iconic Autodromo Enzo e Dino Ferrari in Imola from 10th -12th May 2019, and the Aruba.it Racing – Ducati team is not wasting any time as they continue working in preparation for the Pirelli Italian Round.

On the 24th April the Italian based squad and their riders Alvaro Bautista and Chaz Davies took to the track at Imola Circuit for a one-day private test as they keep working on their strategies and on fine tuning their Ducati Panigale V4 R ahead of the Borgo Panigale manufacturer home round in Imola.

For championship leader Bautista this was a good opportunity to get acquainted to the demanding layout of the Italian race track, as this was the first time ever that the Spaniard had seen the historic circuit: “Today was a really positive day because I had a chance to test at Imola, a track I’ve never been to before. Now I’ve got some markers for the race weekend, which is the most important thing”.

The weather was good for part of the day allowing Bautista to put in some serious lapping on the Italian tarmac. Toward the end of the day track activity was disturbed by a sudden downpour, which give the chance to the 34-year-old to put in also a few laps on rain tyres: “I have to say that we were lucky to have the rain towards the end of the test because this allowed me to lap in the wet for the first time with this bike and these tyres. I’m very pleased because I started becoming confident with the bike also in these conditions, which are the only ones we haven’t encountered this year”.

It was a positive test also for his team-mate Chaz Davies, who kept working on improving his feeling with the V4 R before the rain interrupted his session: “Today was not so bad, we got some laps this afternoon, and we were getting some decent data. Unfortunately, the day was cut short by a bit of rain, but we still got some useful information here for the race. There are still a couple of question marks over some changes we made today, which we were looking to verify before the rain came, but overall the feeling is not so bad. I’m looking forward to racing here in front of the home crowd in a couple of weeks. Imola is always a special place, and the fans here are so enthusiastic”.

Towards the end of the day, the Aruba.it Racing – Ducati riders took the time to greet the many fans, who filled the main grandstand during the day, meeting them in front of their garages on the pit lane for an autograph session.

Follow the Aruba.it Racing – Ducati team at the Pirelli Italian Round with the WorldSBK VideoPass