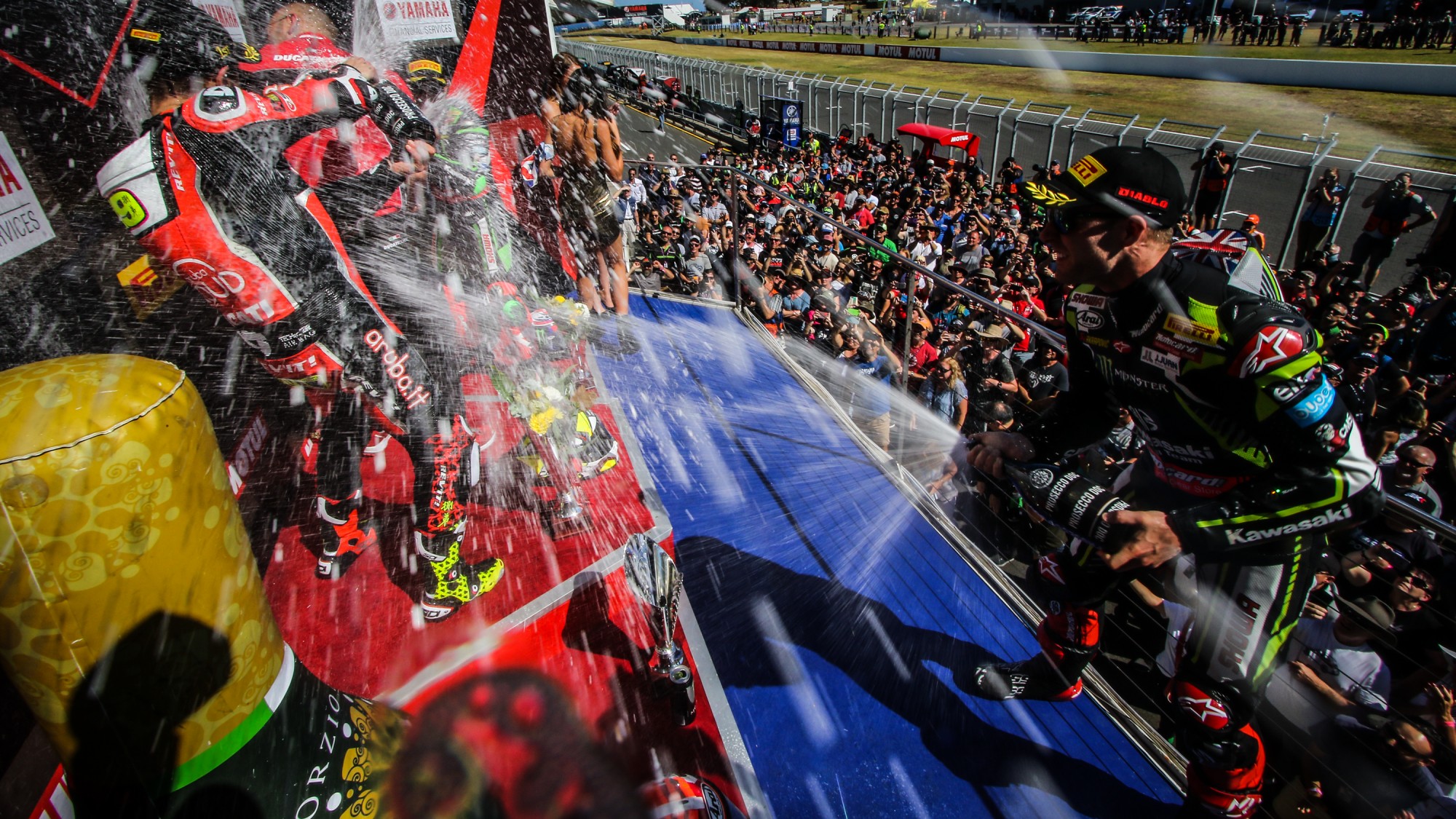 Unpredictability, success stories and smashed records: 2019 in a nutshell is what 2020 now expects

After a year of highs, records, first-time winners and resilient fightbacks, WorldSBK in 2019 had it all. Numerous final lap scraps, emerging stars and formidable rookies made it a season to remember, but there’s still more to come. The 2020 MOTUL FIM Superbike World Championship will feature new riders, new teams, new circuits and a whole new look, with some of the biggest rider line-up swaps in years making for a thrilling show. So, what more awaits in the forthcoming season?

There were countless records achieved and broken in 2019 but year after year, they keep being shattered. Both in terms of pace, country achievement and Championship success, the records relentlessly keep on breaking. In the last 11 races of 2018 and the first 11 races of 2019, the two longest winning streaks were set in back-to-back fashion by two different riders on two different bikes.

Jonathan Rea on a Kawasaki and Alvaro Bautista on a Ducati both set stand-out records from perfect performances, and then went on to achieve more throughout the year. Rea took a fifth WorldSBK title whilst Bautista set a new record for rookie wins in WorldSBK at 16. On top of all of that, Toprak Razgatlioglu made history by becoming the first ever Turkish rider to win in WorldSBK at Magny-Cours in 2019. Can he achieve more record-breaking feats throughout the 2020 season?

In the forthcoming season, there will be new tracks which will undoubtedly mean there’ll be new battles. Oschersleben returns to the calendar for the first time in 16 years, whilst the Circuit de Barcelona-Catalunya will make its debut. 13 rounds across 11 countries and four continents, WorldSBK’s spectacle will continue to be one of awe.

Both circuits have featured last lap scraps across numerous disciplines, with 2003 featuring a final lap showdown at Oschersleben in WorldSBK between Neil Hodgson and Pierfrancesco Chili. The Catalunya venue has hosted countless MotoGP™ battles, including Valentino Rossi’s famous victory over Jorge Lorenzo in 2009. Add onto this new riders and teams, the essence of unpredictability will add much spice to the races.

Speaking of new riders, there’s plenty; Scott Redding (ARUBA.IT Racing – Ducati) headlines a star-studded list of rookies and comes back onto the world scene with a point to prove. The reigning BSB champion will be in good company, as the reigning WorldSSP runner-up Federico Caricasulo (GRT Yamaha WorldSBK Junior Team) graduates, whilst double MotoAmerica Supersport champion and four-time MotoAmerica Superbike race winner Garrett Gerloff comes to WorldSBK. All-Japan Superbike champion Takumi Takahashi (Mie Racing Team) will make his full-time WorldSBK debut and will be one to watch too.

There’s also plenty of riders returning to WorldSBK action and swapping colours, with big focus being placed on Xavi Fores (Kawasaki Puccetti Racing) to fill the boots of Toprak Razgatlioglu. Lorenzo Savadori (Team Pedercini Racing) is back in action, whilst Alex Lowes joins the Kawasaki family at KRT. Leon Haslam moves to Honda along with Alvaro Bautista, whilst Leon Camier is at BARNI and Eugene Laverty heads to BMW. One of the biggest names moving is Toprak Razgatlioglu, who heads to the Pata Yamaha WorldSBK Official Team.

Get more action ahead of 2020 and catch up on the pre-season tests and enjoy hours of content from previous seasons with the WorldSBK VideoPass!