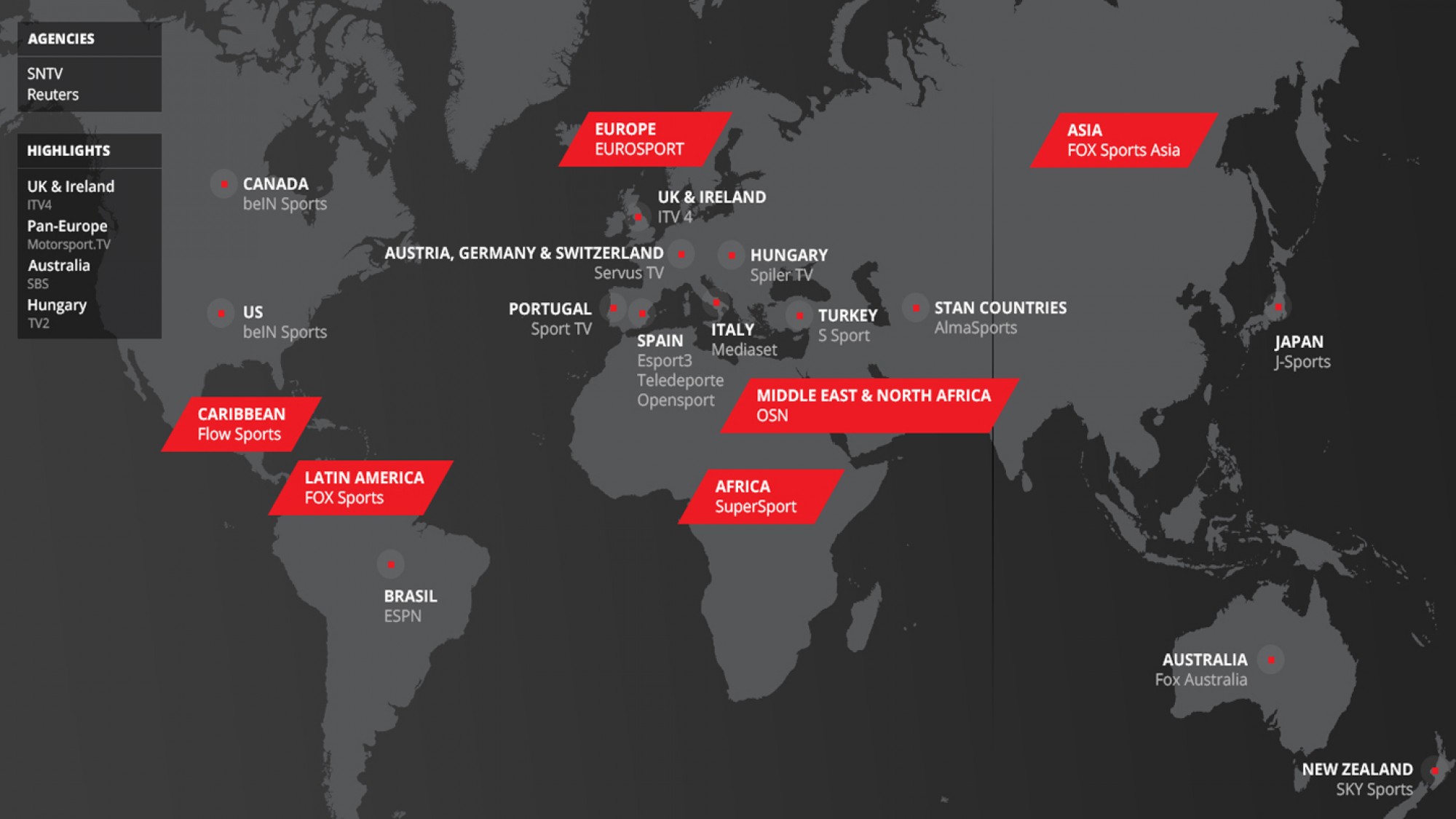 2018 welcomes another stunning season of coverage for SBK®

Dorna WSBK Organization are delighted to announce the MOTUL FIM Superbike World Championship racing action is continuing to be enjoyed by fans all over the world, with worldwide broadcasting coverage set to improve for 2018. Offering even more air time and sessions than ever before, WorldSBK is being enjoyed worldwide on over 20 networks, as interest in the world’s fastest production-based motorcycle series grows year on year.

Following the success of the historical 2017 season, which saw Jonathan Rea (Kawasaki Racing Team) become the first rider to take three back to back world titles, fans will continue to be able to enjoy WorldSBK on their screens from all 13 rounds of the season. Welcoming full access to the action from the opening day to the chequered flag, it is becoming even easier to relish a full weekend of racing action and emburse yourself in all things WorldSBK.

Eurosport continue to be a strong broadcasting partner within the WorldSBK paddock, showcasing the series to Europe. With commentary appropriate to each country, coverage will be second to none. British Eurosport will exclusively cover all Rounds with live on-site commentary and RF camera, providing the most exclusive insights from the circuit with free practise available on Eurosport Player. Mediaset provides coverage for Italian, as Ducati and Marco Melandri, Aprilia and Lorenzo Savadori, and MV Agusta are pivotal parts with full production on site for all events.  Whilst Teledeporte and Esport3 will air in Spain, fans will look to the success of Jordi Torres, Roman Ramos, and Xavi Fores for 2018. On top of this, European fans (excluding the UK and Ireland) can enjoy the HL 46 package from Motorsport on both their linear channel and OTT player.

Throughout Austria, Germany and Switzerland Servus TV will continue with their exceptional coverage of the championship, in order to keep up with WorldSBK whilst Portuguese fans can enjoy SportTV, to tickle their taste buds before the Portuguese Round of the season. S Sport will proudly host the WorldSBK championship to Turkey, meaning fans can watch home hero Kenan Sofuolgu and promising star Toprak Razgatlioglu stun the series, whilst the Stan countries will get to see racing action through AlmaSports. Hungary once again broadcast throughout SpilerTV live on race day, and TV2 will host the HL 46 on their free to air station.

Continuing with a strong presence in the MENA countries, OSN will have a vital role in the WorldSBK coverage, whilst SuperSport will keep coverage high in Pan Africa, to ensure fans don’t miss a minute of the action on track.

FOX Sports Asia will be continue offering Superpole and both races to broadcast to more than 25 countries – including Indonesia, to follow their three WorldSSP300 riders - live on the home of Asian two-wheeled motorsport before WorldSBK takes to the Thai destination of speed at Chang International Circuit. JSPORTS will maintain their coverage of WorldSBK racing action in Japan, as they continue to have a strong presence around the circuits.

Broadcasting to the eastern corner of the world, Fox Sport Australia will continue to show the stunning MOTUL FIM Superbike World Championship. There will be plenty for Australian’s to look out for Down Under, ahead of a scintillating 2018 season, and with SBS showing HL 46, they won’t miss a minute. Australia’s neighbour, New Zealand will be able to continue to view WorldSBK via Sky Sports – the leading pay TV platform - as they cover all series for 2018.

North America won’t be a continent to miss out on coverage of WorldSBK, as beIN Sports will continue to keep the US and Canadian fans up to date with the exhilarating action. With additions to the grid of Jake Gagne (Red Bull Honda World Superbike Team) and PJ Jacobsen (TripleM Honda World Superbike Team) appealing to the fans. Latin America gains the third Fox Sports coverage, as the countries get to see their riders Yonny Hernandez (Pedercini Racing) and Leandro Mercado (Orelac VerdNatura) in all their glory with action either live or later on the same day; whilst ESPN will provide coverage to Brazil.

WorldSBK’s social media presence is also worth noting, as Facebook, Twitter and YouTube followers have improved by over ten percent on the following season. Social Media is now vital element and the fastest way to keep up with all things WorldSBK. Over 1,700,000 people are able to follow our official channels and with the formats ever changing, it will only continue to improve.

Access to the MOTUL FIM Superbike World Championship continues to improve, and wherever you are in the world the unmissable action will always be at your fingertips. Ensure you never miss a lap of what is set to be a spine tingling WorldSBK season by connecting with the free WorldSBK App, which includes live timing a tracking all thanks to Tissot.