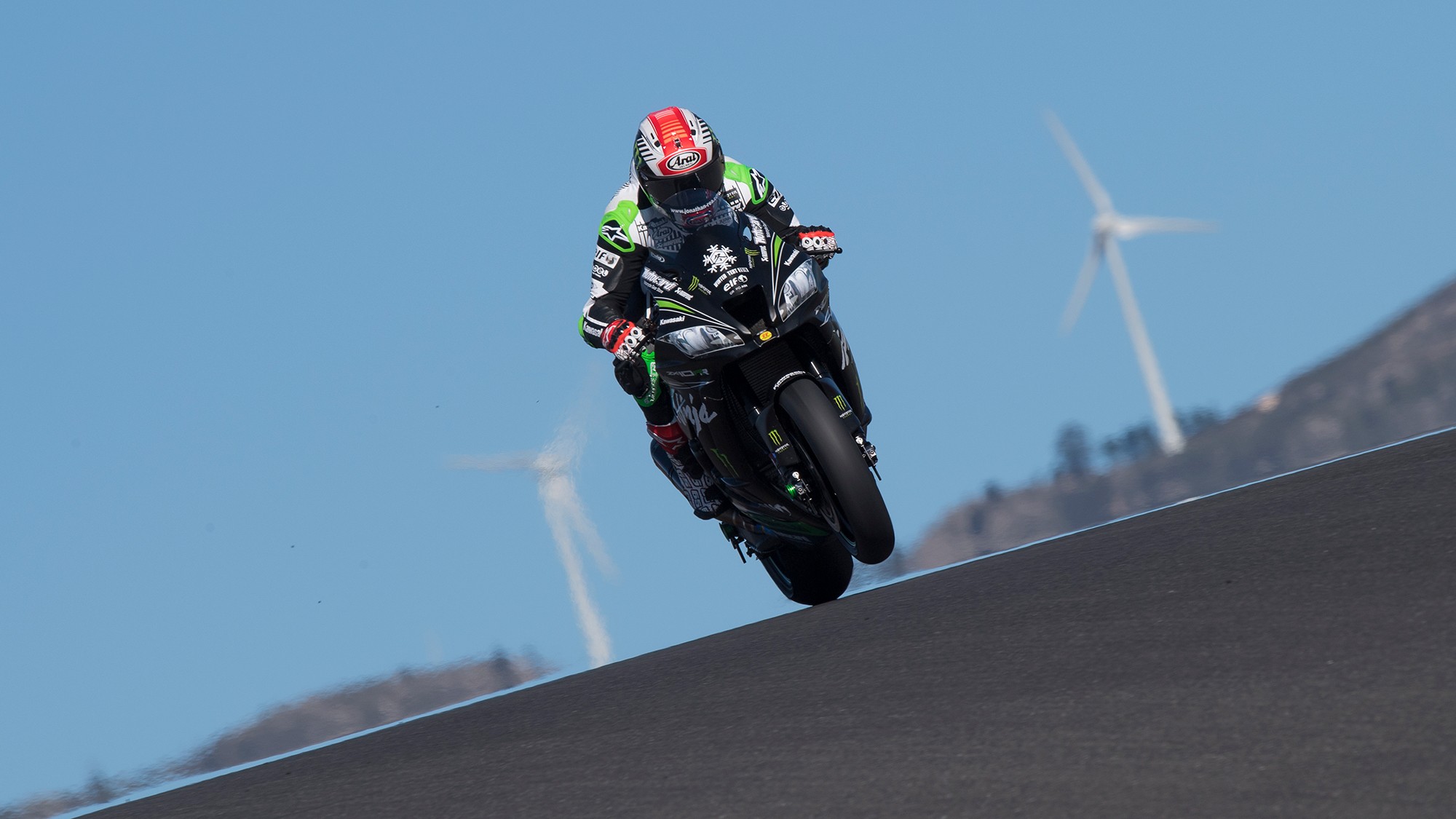 Riders took to the European track for the last time before heading to Phillip Island Grand Prix Circuit in February, for the second and final day of testing action around Autodromo Internacional do Algarve. Aware of the importance of the time they have out on track, as they continue to work on the new regulations for 2018 and the timing screens were lit up all day. But it was Jonathan Rea (Kawasaki Racing Team) who took the honours in Europe, with a time of 1.41.485.

Stronger winds did not scare off the riders, and Rea finished 0.138 ahead of his rivals, as the Northern Irish rider put in his longest stint at the start of the day. On the other side of the garage, Tom Sykes (Kawasaki Racing Team) finished in fifth overall, taking a similar outlook to Rea as he spent more time out on track in the morning. The British rider was able to set a time of 1.42.312.

In the Aruba.it Racing- Ducati garage, Chaz Davies and Marco Melandri have continued to work on the setting of their Panigale R’s, as they work with the 2018 regulations, following on from the work in Jerez. Spending time focusing on their set-up, they prioritised this ahead of testing the Pirelli’s or the lap times.

Just over half the day’s testing completed in Portimao & @PataYamahaWSBK’s @alexlowes22 is working hard on his race pace! The 27-year-old is currently in P8 with a 1:42.828 after putting in a number of long runs once again on Monday! #YamahaRacing #WorldSBK #WeR1 pic.twitter.com/i7Jo5YUR8G

Michael van der Mark (Pata Yamaha Official WorldSBK Team) and Toprak Razglatioglu (Kawasaki Puccetti Racing) both impressed on day two in Portugal, with the Dutchman sitting in the top three positions, and the Turkish debutant also sat towards the top of the timing screens. However, Razgatlioglu was one of the riders who crashed on Monday, losing control of his ZX 10RR in the early afternoon. Whilst Pata Yamaha Official WorldSBK Team-mate Alex Lowes shot up to the top of the timing screens in the closing half an hour, finishing in second with a lap time of 1.41.633.

Leon Camier (Red Bull Honda World Superbike Team) continued the positive feelings with the Honda from the opening day of testing, stunning at the end of the day with a lap time of 1.41.623, putting in over 50 laps. Team-mate Jake Gagne had a quieter day, and his team has decided to finish the test by noon.

The teams will now pack up their garages to prepare the third pre-season test which takes place next month in Australia, where two days of testing will take place before the start of the inaugural Round of 2018. Follow all the news from Portimao and the rest of the preseason with the WorldSBK VideoPass.