Markus Reiterberger (alpha Racing-Van Zon-BMW) returned to form and the highest step of the podium with a phenomenal display at Donington Park, in the fourth race of the 2018 European Superstock 1000 Championship. Making a near-unbelievably good start, it was Reiterberger’s pace in the second half of the race that proved to be unmatchable, strolling to his third win in 2018.

The German’s closest rival in the title battle and shadowing him on the grid at Donington, Roberto Tamburini (Berclaz Racing Team), had the opposite beginning to his race, falling back to fifth and facing an uphill struggle from there. The Italian managed to climb back to third following a fall by Alessandro Delbianco (GULF ALTHEA BMW Racing Team) and a mistake by Federico Sandi (MOTOCORSA Racing) at turn 11, but Maximilian Scheib (Aprilia Racing Team) proving to be a rival too many.

The Chilean was the only rider to match Reiterberger’s pace in the early stages of the races, but as laps went by Scheib’s Aprilia seemed to struggle more. In the end, however, a fantastic showing of defensive racing gave Scheib second place by 0.018 seconds over Tamburini.

Behind, Luca Vitali (Aprilia Racing Team) took his best result of the season, finishing the race in fourth. He now ties Florian Marino (URBIS Yamaha Motoxracing STK Team) in fifth place in the championship. The Frenchman, second here last year, lost the battle with Vitali both on the track and, for now, in the standings, ending the race in fifth.

Federico Sandi, repeating the Ducati woes in the WorldSBK race, couldn’t fight for his second podium of the season, and leaves Donington in sixth. Seventh went to Riccardo Russo (C.M. Racing), with Jan Buehn (alpha Racing-Van Zon-BMW) in eighth.

That closes off an epic weekend of racing at the Prosecco DOC UK Round. Watch all the reactions, highlights and much more from the Donington races thanks to the WorldSBK VideoPass. 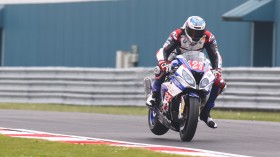