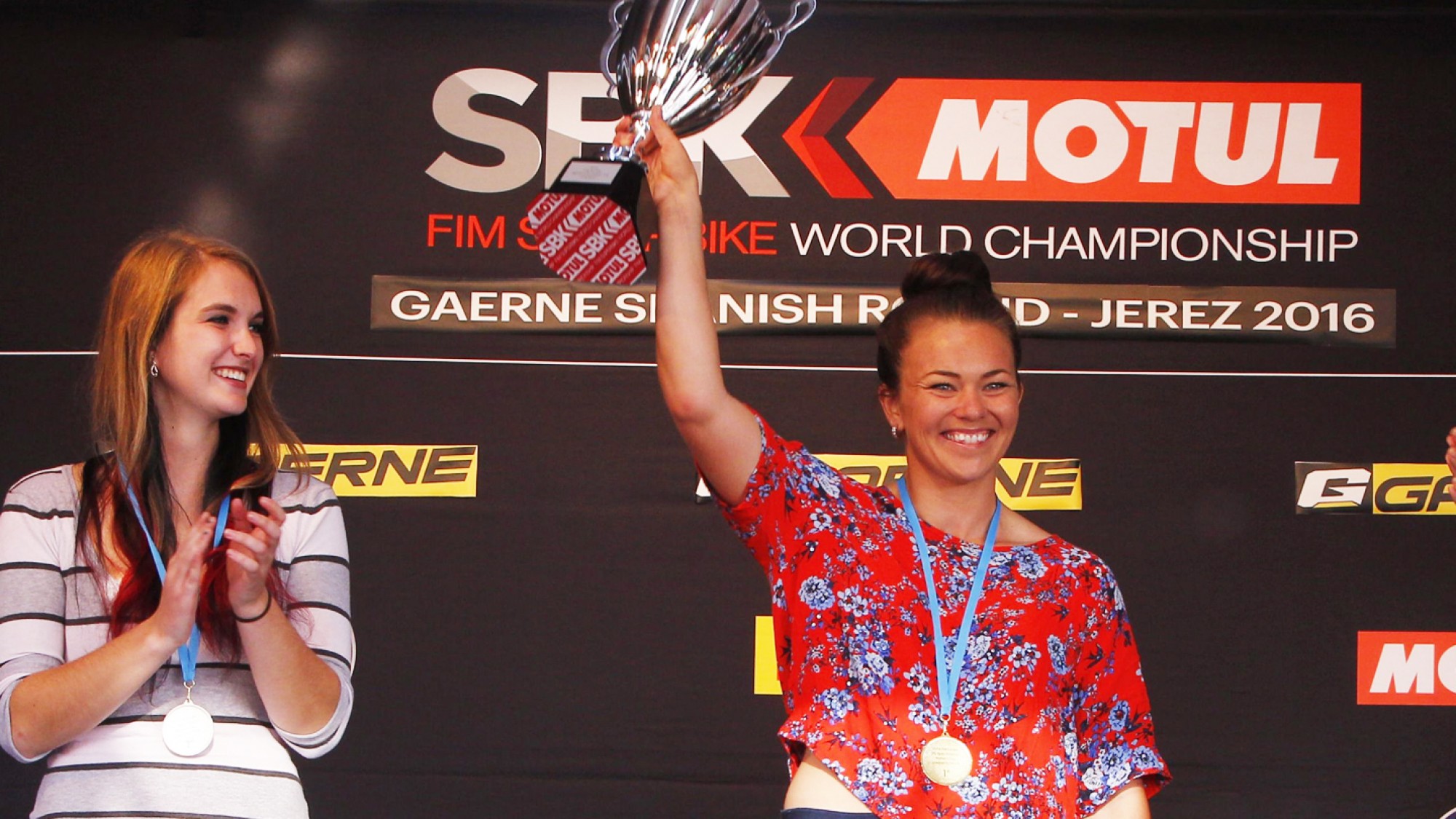 2017 will see the welcomed return of fast girls in the MOTUL FIM Superbike World Championship, as Ana Carrasco and Avalon Biddle debut in the new WorldSSP300 series.

20-year-old Ana Carrasco from Murcia will enter the WorldSBK paddock this season, competing in the inaugural FIM World Supersport 300 World Championship on a Kawasaki Ninja 300 - with ETG Racing team.

Avalon Biddle, 24, won the FIM European Women's Cup in 2015 and 2016 and will take on this season with Sourz Foods-Benjan Racing. Biddle is well-known in the WorldSBK paddock with fans and teams alike. She was the first winner in the Women’s Cup, and has never been off the podium over the past two seasons.

Discussing the entry of the two riders in the new Championship, WorldSBK Sports Director Gregorio Lavilla says: "We would like things to go well, we have seen women in other sports doing very well; I think they just need the right opportunity. WorldSSP300 is the right platform, because all the bikes will be at a good level. From the point of view of the riders - both men and women - if they do well, they will have options to reach other categories and progress. Of course two [female riders] are not enough, but it's a starting point. "

The arrival of Carrasco and Biddle in this category reminds us that WorldSBK has been littered with female riders in the past, which can be easy to forget.  Among the illustrious former riders, many will remember the American Melissa Paris – who was the first female rider to participate in the Supersport World Championship. She rode as a Wild Card in the seventh Round of the 2009 season, at Miller Motorsports Park (USA).

Italian Paola Cazzola competed in 2010, in five rounds of World Supersport securing a total of 3 points, making her the only rider to have scored points in the series.

Before this however, German Katja Poensgen had already competed in a wild card race. At the Nurburgring in 1998 – the year before the World Supersport Series became the current Supersport World Championship. Despite being unable to score a point, the German finished that race inside the top 20. Other riders who have entered as a Wild Card in at least one WorldSSP round are; the Canadian Marie-Josée Boucher, Brit Jenny Tinmouth and Hungarian Nikolett Kovacs.

Other well-known names, such as Maria Costello, Lucy Glöckner or Poensgen have previously competed in the Superstock 1000 category. We also had female appearances in the now defunct Superstock 600 European Championship such as Rebecca Bianchi, Marketa Janakova, Ricarda Neubauer and Alessia Polita.

The outstanding British rider Maria Costello - a member of the FIM Women's Motorcycle Commission - has been a coach and mentor in the Women's European Cup. The competition ran from 2015 to 2016 and was able to bring together a good group of young women in to produce some of the brightest stars of this generation.

As the EJC class comes to an end in the WorldSBK paddock, there is no longer an exclusive competition for women, although some may find themselves a ride in the World Championship series similar to Carrasco and Biddle. This is clear from the explanations of Gregorio Lavilla on the list of entries of 2017: "This year especially in WorldSSP300 we have had a lot of requests that arrived on time, but many others that arrived outside the period. Among these requests are some girls who wanted to join the Championship"

"We wanted to delay the registration list as much as possible so that the teams can secure all the resources,” reveals the sports manager of WorldSBK. “But by November at the latest we needed to define which teams and riders we will have next season. We cannot accommodate them all - especially in a new category - and maybe we've left real talents out, but this is the procedure. I'm sure next year will be easier and everyone will have the opportunity to say whether they want to be there or not. "

Women are starting to become noticed in motorcycle racing, and are beginning to make an impact in the traditionally male territory of speed. There are still not many in comparison to other sports, but they have come to stay. The young and experienced Avalon Biddle and Ana Carrasco lead the way – along with other women competing in national series – for a generation that aspires to improve on the success of their predecessors.