Luke Stapleford (Profile Racing) turned his Friday fortunes around to take pole position on Saturday for his first time, after graduating from Tissot-Superpole 1 earlier in the evening. The Brit finished 17th overall on Friday and was able to completely turn things around in the second session to secure the front row start.

Reigning Champion Kenan Sofuoglu (Kawasaki Puccetti Racing) qualified in second, while his teammate Randy Krummenacher finishing in third, after also having set the fastest pace on Friday. The Swiss rider was the quickest of his rivals for the overall runner-up spot to qualify, giving him the advantage heading into the final race on Sunday.

With track temperatures at a prime 32 degrees at the beginning of the session, WorldSSP riders were able to set their fastest times in Superpole 2. Alex Baldolini (Race Department ATK#25) continued his good pace into Saturday evening and qualified fourth, ahead of last year's Qatar winner, Kyle Smith (CIA Landlord Insurance Honda) in fifth.

2016 runner-up contender Jules Cluzel (MV Agusta Reparto Corse) qualified in sixth, ahead of Zulfahmi Khairuddin (Orelac Racing VerdNatura) in seventh, who graduated from Superpole 1 earlier in the evening. Ayrton Badovini (GEMAR Balloons – Team Lorini) will be starting Sunday’s race from eighth on the grid, while Honda World Supersport Team’s PJ Jacobsen will have to work hard on Sunday to catch his rivals, after he qualified in ninth.

The stars of WorldSSP will be back on track for the ultimate Sunday clash on the 30th of October at 19:15 local time (GMT+3), where Krummenacher, Cluzel and Jacobsen will go wheel to wheel to finish the season in second overall. 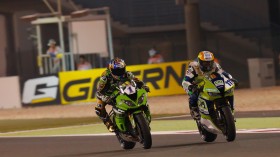 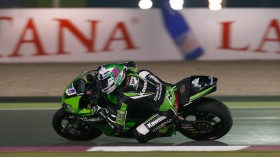 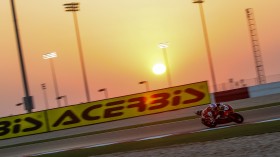