Aruba.it Racing – Ducati rider Chaz Davies took another incredible win at MotorLand Aragón in Race 2, crossing the line 6.471 seconds clear of the nearest bike on track after another sublime ride. Kawasaki riders Tom Sykes and Jonathan Rea completed the podium in Spain after being locked in another head to head.

Home rider Xavi Forés took his Barni Racing Team Panigale R into fourth once again, equaling his best career result, gained in Race 1 at MotorLand. His compatriot Jordi Torres achieved his best result of the year after joining his new team for 2016, crossing the line in fifth ahead of the Ducati of Giugliano and proving the lead BMW by an impressive margin.

Giugliano recovered from a small incident on track to hunt down Honda rider Michael van der Mark and re-pass him, putting himself into P6 by the end of the race. Van der Mark, after an uncharacteristically difficult Saturday, kept his Honda in the mix in Race 2 to grab another great haul of points, crossing the line in seventh after a good start from 11th on the grid, unable to hold off Torres and Giugliano by the end of the race.

Van der Mark’s teammate Nicky Hayden dropped down through the order with Yamaha’s Alex Lowes after an incident on track, with the 2006 MotoGP World Champion unfortunately suffering a mechanical problem later in the race and finding himself unable to see the flag.

Yamaha duo Sylvain Guintoli and Alex Lowes, after starting from the front row, finished the race in P9 and P10 respectively after a difficult start to the race, with the new YZF R1 not yet able to match its one-lap pace over race distance.

Aprilia rider Alex DeAngelis came home in 8th to make great progress after Race 1, with the San Marino rider recovering from recent surgery and surely happy with another top ten result. MV Agusta’s Leon Camier finished just outside the points, with the Italian factory hoping to get back up the grid when WorldSBK gets to Assen for the next Round. 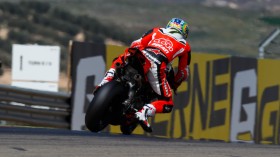 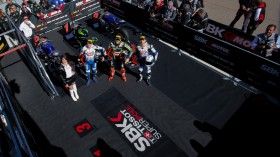 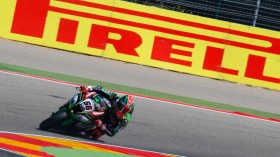