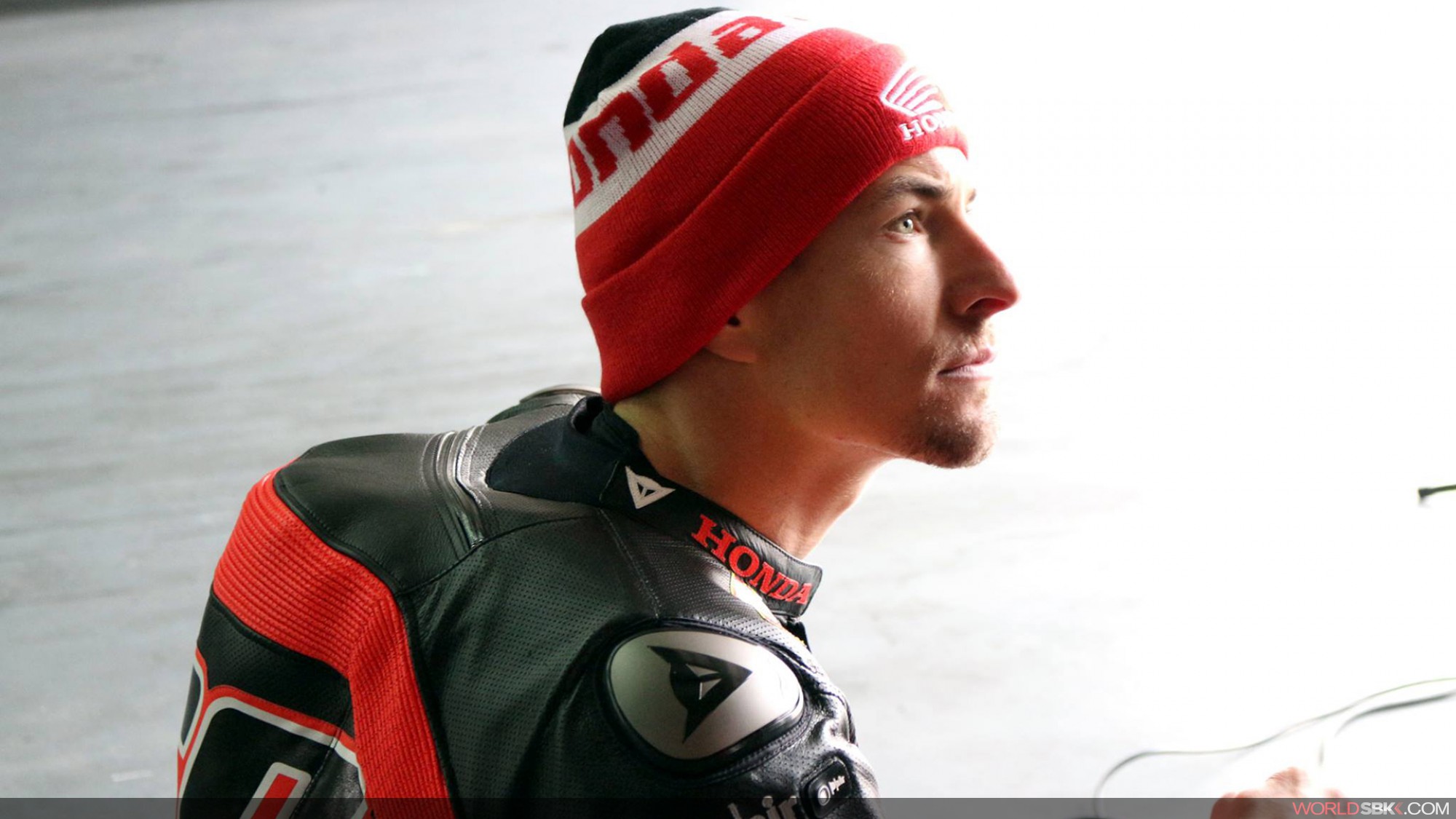 There was plenty of attention on Nicky Hayden as the 2006 MotoGP World Champion began his first WorldSBK test in Aragon on Monday. Poor weather conditions prevented any meaningful running, but that didn’t stop the ‘Kentucky Kid’ from enjoying several laps onboard his Honda CBR1000RR SP.

The test marked a return to Hayden’s Superbike roots as, ahead of his 13 years in Grand Prix racing, he was the AMA Superbike Champion of 2002. Shortly after Monday’s day of testing, Hayden caught up with WorldSBK.com for this exclusive interview in the Honda World Superbike Team garage.

Nicky, Day 1 is over here in Aragon. How did it go?
The weather didn’t help things this morning. It was a bit wet. Well, foggy more than anything…you could hardly see! In the afternoon, we started with some rain tyres and made a couple of exits to get a bit of a feeling and to set the handlebars. We did a bit of work in the afternoon, but it really was a very short time. I looked up and asked what time it was: they said, ’12 minutes to go!’ and I was like, ‘What?! I thought it was at least another hour and a half or two!’ We did 20 or 25 laps over four exits, so we got started. I know there is a long way to go, but you have to start somewhere.

The classic question: how did the Honda WorldSBK machine feel in comparison with your Honda MotoGP open bike?
The tyres are different. I started with the wet front, which was quite a strange feeling, but once we put the slicks on the tyres were fine. I’ve just got to understand them. The brakes are a bit different. The electronics are a lot different. I’m in a new team and quite a new environment, so I have just got to understand everything and find the limit with the bike. I can say these electronics - just on paper - are much more advanced that what I was using this year with the Open bike, in terms of the amount of possibilities, different options and how much more you can fine-tune them. So that will be almost like going back more to what I had when I was at Ducati in MotoGP.

Track conditions were not great, but did you feel comfortable?
There is a lot of work to do, so let’s keep going. I am happy to ride the bike to get some feeling and some work started, but let’s keep going. At the moment, I’m not braking on the limit when it comes to the front tyre. I’m not using the front to the limit and that is probably going to be something. In terms of the rear, I have a feeling and generally with my style I can understand the rear quicker than the front – I’m a dirt tracker! I need more time to understand the front, that is probably my main focus.

Does this feel like a Superbike homecoming?
It wasn’t my first time, but my first time in 13 years! Back then I was riding a twin RC51: a very different bike and very different tyres. That’s so long ago I don’t really remember, but for sure I hope the transition can be easier versus somebody who had grown up on 125 and 250 two-strokes. I know four-strokes. Let’s hope that will make the transition easier for me [laughs]!

What is it like to work with the Ten Kate team?
Everything has gone pretty smoothly. We didn’t get a full day of work, but the communication is fine. Everybody speaks very good English and that is always a very big help. It is also a new bike for the Crew Chief (Gerardo Acocella), so he has to learn the rider and the bike! But I have a very good feeling already with him and the team. We are working and starting to put out fires. It’s early days, but it’s fun to start a new project.

At least you already knew the MotorLand Aragon circuit!
Yeah, for sure, it helps a lot. It’s really nice. I have enough to learn today; I don’t also want to go and learn a track, especially a hard track like this with blind corners and so on. I was here not so long ago on a MotoGP bike, four or five races ago, so I know the track and that helps a lot. It would have been nice to make the first laps on a dry track I know but, still, we got to go out in the wet so it’s not too bad.

Hayden and Honda continue their 2016 pre-season programme in Aragon on Tuesday.