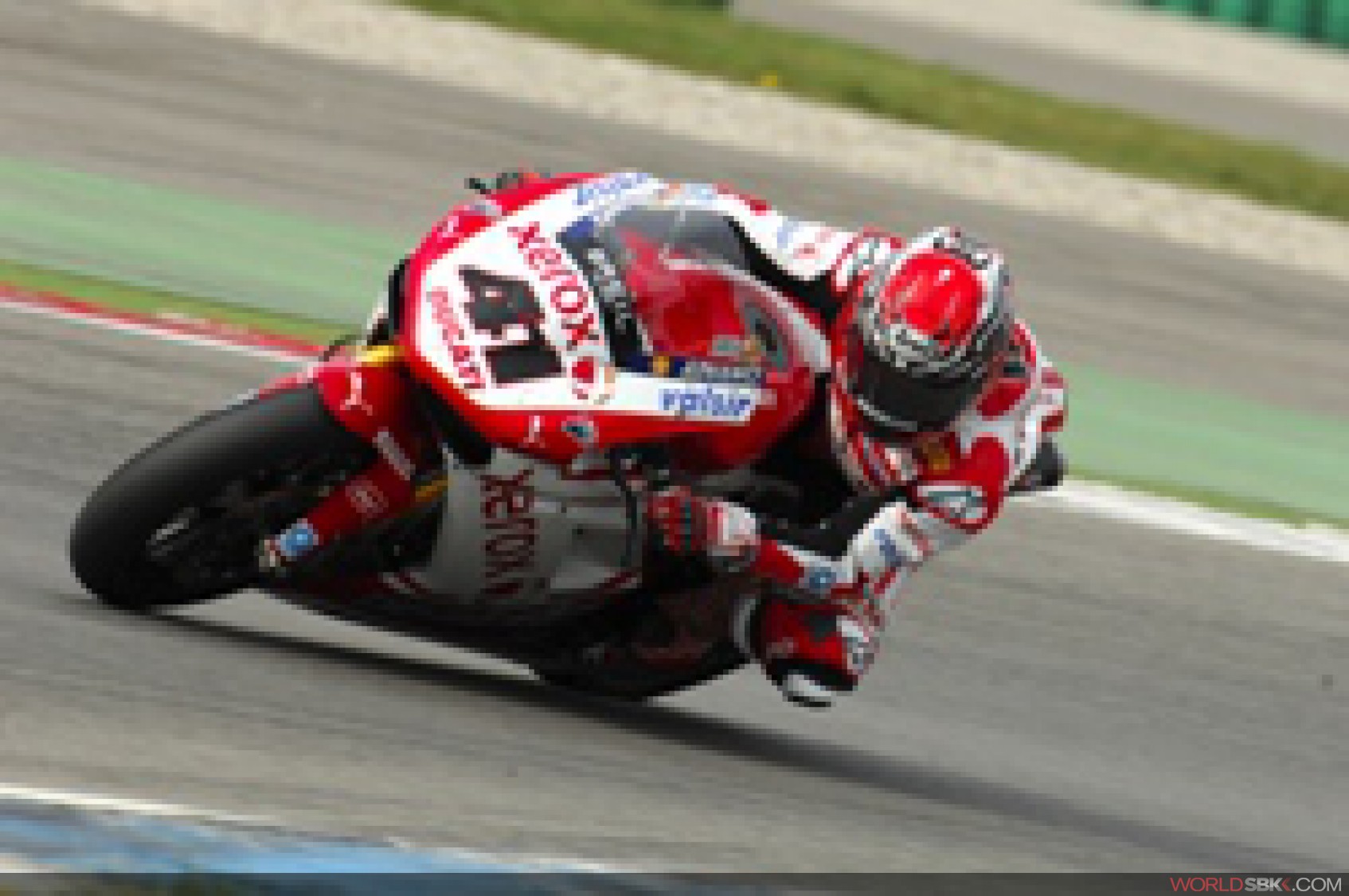 Spies and Haga share the wins in double Dutch thrillers

The Texan pulled out a fantastic pass on his Japanese rival to take a last-gasp win in the first race, but then crashed out of race 2 early on, leaving Haga the winner. Leon Haslam rode superbly to take home two podiums for the Stiggy Racing Honda team, while Jakub Smrz (Guandalini Ducati) scored his best-ever result with third in race 2. In the championship Haga now has a 60-point lead over Spies, 180 to 120.

Spies took his fourth win of the season by forcing his way past points leader Haga in a thrilling final lap. The decisive move came a couple of turns from the flag, and the Texan then closed the door on his rival to win. Third place went to Haslam, who had the satisfaction of recording a new lap record. Yamaha's good all-round performance was completed with fourth place for Tom Sykes, the British rider finishing ahead of Max Biaggi (Aprilia), well up again after struggling in qualifying. Sixth place went to Smrz, while Michel Fabrizio could only manage eighth with the second factory Ducati. Troy Corser put in a good performance on the BMW, while Max Neukirchner (Suzuki Alstare) could only finish 13th after crashing out from second place and then rejoining. Carlos Checa (Hannspree Ten Kate Honda) also crashed out while trying to catch up after a poor start.

Ben Spies: "I was trying to set a really good pace in the first few laps, but just didn't have the same feeling I had in practice with the bike, and Nori came by and I saw nobody was behind Haslam, so I just sat back and watched. When the tyres started going off we made some moves, there were some close moments with Leon but we kept it clean. I knew I had to go and I fought it out with Nori over the last two laps. Actually I didn't know where to pass Nori, but I got a good run and it was close."

Noriyuki Haga: "I am a little bit disappointed but we did a very good race. I got a good start but just at the beginning of the race Ben was quite faster and I tried to catch up with him. It was difficult because I had a little problem with the bike. I caught up again and passed him and tried to push but couldn't. So at this point I just lost a few points for the championship."

Leon Haslam: "I felt really good to be fair, the race pace was good and I was just sitting behind Nori. I was losing a lot of time out of the hairpin and onto the start-finish straight and was trying to match Nori through there and the next minute me and Spies had a good elbow session but it was a fantastic race and again a big thanks to the team to give me a package to do that."

The outcome was decided on lap 2 when Spies slid off into the gravel while in the lead. This left Haga with an unchallenged run to the flag as he leveled the score with Spies with his fourth win of the year, together with a new fastest lap. Haslam improved on his result in the first encounter with a second place in race 2, the British rider now proving to be a true podium contender. Smrz scored his first-ever career podium in third, the Czech rider getting the better of Fabrizio in the final stages. The Italian had a broken gearbox in the end but managed to bring his 1098 home fourth. In the all-British battle for fifth, Jonathan Rea (Hannspree Ten Kate Honda) got the edge over Sykes. Suzuki's disappointing weekend was completed with a ninth place for Neukirchner and 12th for Yukio Kagayama. Corser scored another tenth place for BMW, just ahead of team-mate Ruben Xaus. Biaggi's race came to an end at the start with a clutch problem, while Shinya Nakano failed to take the start after his crash in race 1 in which he damaged his previously operated-on shoulder.

Noriyuki Haga: "First of all, I'm sorry for Ben and his crash, I hope he is fine. After the first race we changed the suspension a little bit and the bike was really comfortable, so a big thanks to everyone in the team. I think it's nine years since I won here, in 2000, so I'm very happy and now I'm looking forward to Monza."

Leon Haslam: "I was a little bit ambitious into the first turn but I thought the pace was OK. I rose through to pass Fabrizio, but it took me a lot of the race and when I finally did get past, there wasn't much left and maybe with the cooler conditions the grip wasn't quite so high. I made a few little mistakes but managed to get enough of a break to run into second."

Jakub Smrz: "I was just staying behind Michel and he had a problem or something, it was really close but I could just pass him at the finish. I'm really happy because everybody said before that I can be fast only in qualifying, so now I showed everyone that I can be fast in the race as well and it's a great result for me and the team."

The Supersport race saw a second win of the year for Irishman Eugene Laverty (Parkalgar Honda), who held off a last-lap attack from Cal Crutchlow (Yamaha World Supersport), the new points leader. Third went to Joan Lascorz (Kawasaki Motocard.com), who led for much of the race before losing out to his two rivals in the final stages. Fabien Foret (Yamaha World Supersport) was again up at the front, the Frenchman scoring his best result of the season in fourth, while Kenan Sofuoglu (Hannspree Ten Kate Honda) managed to salvage a fifth place in a disappointing day for the Dutch team, who lost Andrew Pitt in a crash while fighting for a podium place. Mark Aitchison (Althea Honda) was next up, ahead of fellow Aussie Anthony West (Stiggy Racing Honda) and Dutchman Barry Veneman (Hoegee Suzuki).

As expected, the race was dominated by Maxime Berger (Ten Kate Honda), who now becomes the new championship leader, from Xavier Simeon (Ducati Xerox Junior Team) and Sylvain Barrier (Garnier Junior Yamaha). The young Frenchman complicated his race with a poor start and then he went wide and made contact with another rider. After calming down, Berger then began to reel off a series of record laps before taking over at the front on lap 5. Fourth place went to Javi Fores (Kawasaki Pedercini) and fifth went to Claudio Corti (Suzuki Alstare), who failed to emerge in the race, the Italian also losing his points lead. Davide Giugliano (Unionbike MV Agusta) got a bad start from the front row and recovered from fifteenth to sixth before dropping back down to eighth place.

A series of upsets marked the European Superstock 600 race, with the two favourites Danilo Petrucci (Yamaha Trasimeno) and Vincent Lonbois (MTM Yamaha) both eliminated while in the lead. First the Italian was hit by his team-mate Marco Bussolotti, and then the Belgian crashed just a few corners before the chequered flag. Then with the flag in sight, Dutch rider Joey Litjens (VD Heyden Yamaha) messed up his entry into the chicane, leaving the win to Britain's Gino Rea (Ten Kate Honda), who becomes the new championship leader. Third place on the podium went to Frenchman Jeremy Guarnoni (MRS Yamaha).