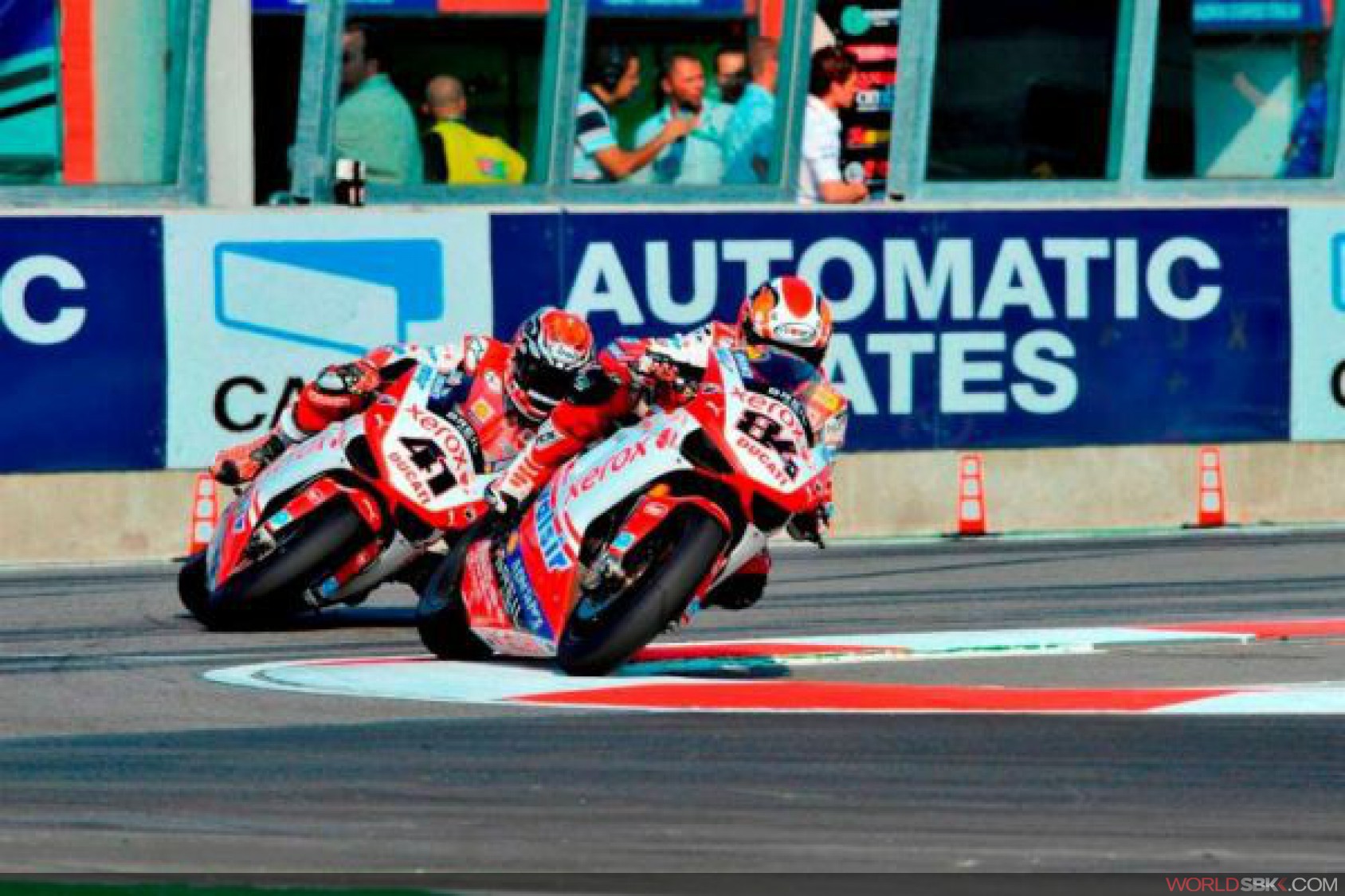 Ducati dominate at Imola. Biaggi and Simoncelli on the podium for Aprilia

Haga won a nail-biting first race of the day, which kept the fans glued to their seats right down to the chequered flag, the Japanese rider taking his first win since Kyalami in mid-May. Four laps from the flag Haga passed Biaggi, who had led since the start, to take the win. Thanks to this result Haga made up twelve points on championship leader Spies, the American only able to finish fourth. There was a terrific scrap for the runner-up slot, which went to Biaggi after the Aprilia rider made a superb move on Fabrizio to pass him at the final chicane. Simoncelli's WSB debut was an unfortunate one, the Italian crashing out from fifth. That place in the end went to Ryuichi Kiyonari (Hannspree Ten Kate Honda), who finished ahead of fellow Honda riders Leon Haslam (Stiggy Racing) and Jonathan Rea (Hannspree Ten Kate), the latter throwing away any chance of a decent result when he went onto the gravel at the Rivazza while trying an overtaking move. Broc Parkes was the first Kawasaki runner home in tenth, ahead of Troy Corser (BMW).

Noriyuki Haga: "This is my first win since Kyalami and I am very happy, I really enjoyed that race. This morning we had a little problem and I thought it would be difficult to make good lap times for 21 laps, so for the race we made a modification for the suspension and things were better. I am really happy for the win because my dad came over for this race and I got the win, so I dedicate it to him!"

Max Biaggi: "I am very happy with the result in the last race in Italy before next year. In the tests we suffered a bit more than the others but me and my team worked hard and late afternoon yesterday we improved our set-up. This morning was OK, we made some modifications, still there is room to improve but for sure it was a great result. In the final chicane with Fabrizio, I thought ‘you never know', I saw him there a little bit on the side and I stick in my bike, stayed in there. I could pass him and this is a good result."

Michel Fabrizio: "From the sixth lap onwards I had a problem with my arm and I couldn't pull the clutch very well, so I got used to changing gear without the clutch, but unfortunately the engine braking wasn't quite right for that. As the laps went on I couldn't feel my hand anymore and in the last five laps I was holding on with two fingers, I could hardly keep my hand on the bars."

The spectacle continued in race 2, but this time Fabrizio was unstoppable and he powered away to take his second win of the season. The Italian finished ahead of team-mate Haga, who with this result moved ahead of Spies in the table. The Texan rookie was not as incisive as in previous races but in the second race had bad luck on his side as he got caught up in the battle for third with the two Aprilias. While making a move on Biaggi and Simoncelli at the final chicane, he was forced to run off the track to avoid Biaggi. He came back on to finish fifth. The final podium place went to Simoncelli, who immediately made his name in a championship as hard-fought as Superbike. Jonathan Rea had another race full of errors, but partially managed to make up for them with sixth place. BMW had another difficult race, with a DNF for Corser and Ruben Xaus returning after injury to finish 13th.

Michel Fabrizio: "Today I really wanted victory in race 2. In the first race unfortunately I had a problem with my arm, and I just missed out on the win. For race 2 I fixed everything, I changed my arm and I changed Nori and went on to win! I am happy for the Ducati Xerox team, today all the Ducati top management were here so Nori and I cut a good figure! For sure I think we deserved the renewal of our contract!"

Noriyuki Haga: "Congratulations for Michel for winning and for Marco with his first time in Superbike, third position today. For the race, I changed the bike completely from the first race and in this bike we had a few problems. During the race the bike started moving a lot, after Michel passed me I tried to catch him up but he was quite fast today and I couldn't find where I could pass him...and then I was dead! I think I need more salt, 1 kilo of salt!"

Marco Simoncelli: "If I finish the race in the first 5 I am very happy. In the first race I was fifth but crashed, while in this race I started better than in the first and after some laps I keep a very good pace. In the chicane with my team-mate I didn't want to pass him, but I braked too hard and I think ‘either I hit him and we crash or I try to pass'. I succeeded and I am very happy, a big thanks to Aprilia and my team. Today was a great big experience for me here in Superbike."

The battle for the Supersport title has been thrown wide-open again as a result of a crash by points leader Cal Crutchlow (Yamaha World Supersport), while he was heading towards his sixth win of the season. The British rider crashed out at the Acque Minerali, and his lead in the table is now two points over Eugene Laverty (Parkalgar Honda), who finished runner-up. The win went to Kenan Sofuoglu (Hannspree Ten Kate Honda) for the third time this year, while the final podium slot went to Fabien Foret (Yamaha World Supersport), who closed up on Laverty in the final stages but was unable to take away precious points. Chaz Davies put in an excellent performance on his Supersport debut with Triumph, bringing the British three-cylinder machine home in fourth place in front of team-mate Garry McCoy.

After taking the pole, wild-card Ayrton Badovini (Aprilia) went on to repeat the same form in the race, taking a lights-to-flag victory. At the start, the Italian was shadowed first by Xavier Simeon (Ducati Xerox) and Claudio Corti (Suzuki Alstare), but he managed to shake them off one by one and take the chequered flag by a large margin. In post-race scrutineering however all the Aprilias were found to have a technical irregularity and Badovini, as well as tenth-placed Federico Sandi, were disqualified. As a result the win went to Simeon, his fourth in a row, and the Belgian is now easily on the way towards the title: he needs just five points in the last two races to win, irrespective of what Corti, who finished runner-up, does. The battle for third was between Sylvain Barrier (Garnier Yamaha) and Michele Magnoni (Belvilacqua Yamaha), with the Frenchman taking the place in a sprint to the line.

The Supersport 600 battle remains to be decided after Danilo Petrucci (Yamaha Trasimeno) wasted a chance to clinch the title. The Italian was in the lead at the final chicane, but came under attack from Eddi La Mara (Honda Lorini), who took his first win, and also from Gino Rea (Ten Kate Honda) and Marco Bussolotti (Yamaha Trasimeno), who finished on the podium. Luckily his chief rival Vincent Lonbois (MTM Yamaha) was unable to go any higher than sixth place, leaving Petrucci with the consolation of an 11-point cushion in the table.